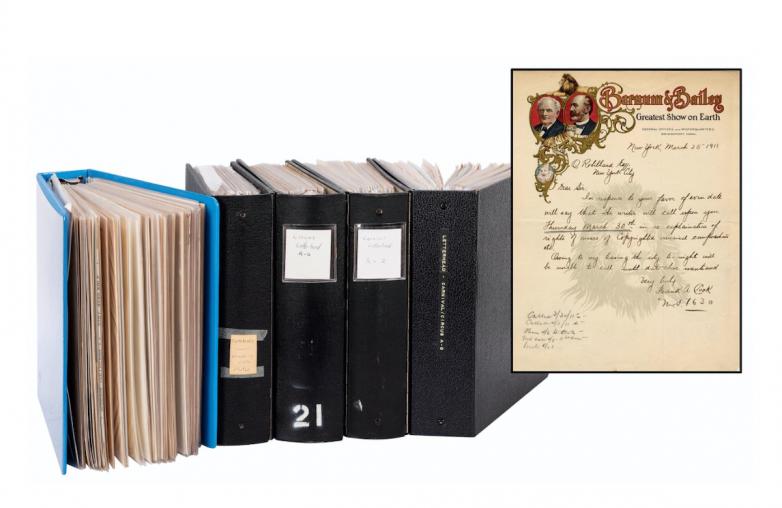 A collection of letterhead from circuses, carnivals, and Wild West shows realized $4,080.

Chicago — Potter & Potter Auctions' signature late summer event had a distinctly carnival atmosphere, attracting bids and interest from around the world. When the hammer fell silent after a day of competitive bidding, 94 lots realized $500-999; 56 lots scored $1,000-$4,999; and five lots made $5,000+. Prices noted include the company's 20% buyer's premium.

Huge, outrageous, and eye-catching circus and sideshow banners represented several of the top lots in this sale.
•    Lot #278, a c. 1930s/40s sideshow banner, Cavalcade of Wonders. Freaks Past & Present, was estimated at $6,000-9,000 and made $28,800 - a new world's record for a banner of this type. It measured over 20 feet wide and 90" high and depicted a snake charmer, magician, three-legged man, tattooed man, Ubangi “savages,” frog boy, little people, fire-eater, and a sword swallower, among others.
•    Lot #280, a c. 1960 sideshow banner for the famous three-legged man, Frank Lentini, punted to $3,120. This 93" x 118” unsigned example featured the performer dressed as a football player at the center of the canvas, inside a decorative frame.
•    Lot #244, a mid-20th century Ringling Brothers and Barnum & Bailey “Greatest Show on Earth” entrance banner, was estimated at $250-350 and traded hands at $3,120 - more than 12 times its low estimated. This 36 x 125” blue canvas banner painted in white was from the collection of Carl “Pop” Haussman.

Specialty collections and archives related to the entertainment industry also generated spirited bidding and results.
•    Lot #236, ten scrapbooks and other ephemera owned and kept by sword swallower Sandra Reed, sold for $3,600. This collection included images, clippings, and publicity materials and was an extensive record of her career, travels, and employers of the 1970s.
•    Lot #241, “Pop” Haussman’s collection of signed circus performer photographs from the 1950, was estimated at $1,500-2,500 and realized $4,320. This archive was presented in 13 albums filled with c. 442 signed and/or inscribed photographs. These 13 volumes were from an archive that originally spanned 34 volumes.
•    Lot #518, a letterhead collection from the early to late 20th century, was estimated at $500-1,000 and delivered $4,080. It included several hundred examples of letterhead from different circuses, Wild West shows, amusement companies, carnivals, and performers, and was organized alphabetically.
•    Lot #525, a collection of c. 200 snapshots of 20th century American carnival attractions, was estimated at $300-500 and soared to $4,080. These amateur photos included haunted castles and “dark rides”; vehicles and exhibits of famous and interesting automobiles; sideshow attractions; monstrosities and oddities; wax museums; band organs; carnival rides; motordromes and motorcycle “hell drivers”; and more.

Circus related apparatus and merchandise - especially stage worn costumes - insured this auction was dressed for success.
•    Lot #304, a sequined purple ringmaster's jacket attributed to Joe Pon, ringmaster of Circus Vargas, was estimated at $125-225 and brought $840. This piece was from the collection of William Biggerstaff, who acquired many of Pon’s costumes in 1984.
•    Lot #299, a c. 1970s circus performer's shimmering silver robe decorated with rhinestones, sequins, and felt, was estimated at $50-150 and made $600. It was produced by Circus Creations of Daytona Beach, FL and sold with two identical robes.
•    Lot #322, a traveling trunk containing 19 juggling items - including wooden pins, faux fruit, and wooden blocks - was estimated at $125-225 and hit the road at $840.

Posters, broadsides, and other promotional entertainment ephemera spanning two decades rounded out this sensational sales event.
•    Lot #211, a trio c. 1960s of Soviet / USSR offset litho circus posters were estimated at $70-100 and sold for $510.
•    Lot #376, a c. 1880s, eight page courier folio for P.T. Barnum Greatest Show on Earth, was estimated at $100-200 and made news at $1,080. This rarity was illustrated with engravings including Jumbo’s skeleton, a “congress of giants,” and other attractions.
•    Lot #154, an original poster advertising Adam West’s appearance as Batman at the State Fair Coliseum, was estimated at $250-350 and traded hands at $2,400. This poster was produced in 1967; no other copies of it have been traced at auction.

According to Gabe Fajuri, President at Potter & Potter Auctions, "The record price achieved in this auction proves that interest in the unusual has never been stronger. We're not only delighted with the results of the auction, we've already been fielding calls from collectors who want to consign to next year's circus, sideshow and oddities auction."