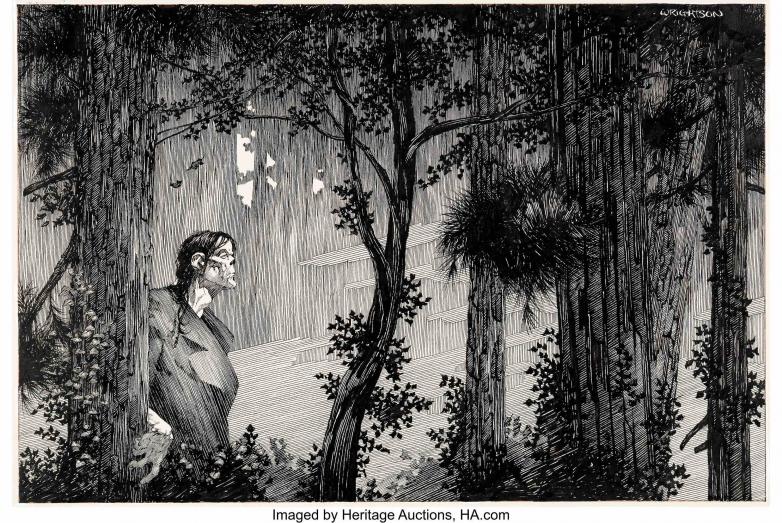 Dallas, TX – The stunning original art for Bernie Wrightson’s Mary Wollstonecraft Shelley's Frankenstein Front Endpapers Illustration Original Art (late 1970s) and a Frank Frazetta painting that appeared on the cover of The Serpent each could bring $250,000 or more in Heritage Auctions’ Comics & Comic Art Auction April 30-May 3 in Dallas, Texas.

Wrightson’s original art for Mary Wollstonecraft Shelley’s Frankenstein is an absolute rarity. Starting in 1975, he spent six years creating images, only three of which are landscape format pieces (the wraparound cover and the back endpapers are the others). Wrightson is so revered for his work on the project that even the images he created that did not end up getting used in the book are in high demand among serious collectors.

“Part of the popularity of Bernie Wrightson’s work stems from the unbelievable amount of detail he works into his images,” Heritage Auctions Vice President Todd Hignite said. “Look at it closely and you’ll see the incredible number of lines he has in everything, whether it is the Frankenstein character, the trees around him or even the background. The amount of work he invested in this powerful image, which offers a glimpse into the monster’s soul, is part of why it is considered such a masterpiece.”

Frank Frazetta The Serpent (aka “Aros”) Paperback Novel Cover Painting Original Art (Paperback Library, 1967) is a spectacular image by an artist whose works have been enormously popular at auction in recent years. The image creates a bit of a conflict for the viewer. Normally, a standing, semi-nude human figure would be the dominant figure in any image, but in this case, the woman’s skin almost blends into the color around her, while the black and green serpent, despite having its head under water, creates the strongest visual contrast. With two of the biggest fantasy art tropes in the semi-naked woman and the snake, the image was used on the 1967 paperback edition for Jane Gaskell’s The Serpent, which was the first in the Atlan Saga series.

Robert Crumb CoEvolution Quarterly #14 Complete 4-Page Story "R. Crumb's Modern Dance Workshop" Original Art (Point, 1977) (estimate: $120,000+) is a four-page story that many of the artist’s fans will recognize from when it was reprinted in Best Buy Comics #nn from Apex Novelties in 1979, during a peak period during the artist’s long career. In the story, Crumb directs a women’s modern dance troupe, until he gives so many orders that one of the women in group spins him back into his place. The ink-on-Bristol board pages are done in ink with incredible detail; the first page is signed and dated lower left.

From the collection of Doonesbury creator Garry Trudeau comes Winsor McCay Little Nemo In Slumberland Sunday Comic Strip Original Art dated 12-13-1908 (New York Herald, 1908) (estimate: $120,000+) is an unquestioned masterpiece, the impact of which can not be overstated. McCay is one of the pioneers of the genre whose work is universally accepted, studied, admired and replicated by countless artists who came after him. In the offered lot, the anticipation of youth awaiting Santa Claus is revealed by Nemo climbing on to the roof and then hanging on as he is sheathed in ice before eventually falling during an icicle landslide.

Amazing Fantasy #15 (Marvel, 1962) CGC VF 8.0 Off-white pages (estimate: $100,000+) is, quite simply, the most prized – and without question the most valuable – of all Silver Age books and one of the hardest to find in a high grade, and the offered copy is in exceptional condition. The March 2020 CGC census reports just 23 copies carrying a grade of 8.0 and just 34 with a higher grade; only three certified copies with a higher grade have been offered through Heritage Auctions. The reason for the issue’s popularity and soaring demand is simple: it includes the origin and first appearance of Spider-Man, as well as the debut appearances of Peter Parker’s Uncle Ben and Aunt May. The classic cover was a joint effort by Jack Kirby and Steve Ditko, and the issue marks the start of Ditko’s run as the primary artist for the Spider-Man title.

Showcase #22 Green Lantern (DC, 1959) CGC NM- 9.2 Cream to off-white pages (estimate: $75,000+) is an extremely rare copy of one of the Silver Age’s most important books; according to the March 2020 CGC census, this is the only known copy carrying a grade of 9.2, with just one copy with a higher grade. Featuring the origin and first appearance of the Silver Age Green Lantern, it ranks No. 10 on Overstreet’s Top 50 Silver Age Comics list. Gil Kane did the cover and interior art for the issue that features the first appearances of Abin Sur and Carol Ferris.

The auction also includes 50 copies from the fresh-to-market “Variety Store Collection.” This incredibly high-grade single-owner collection of Marvel titles from the 1960s and 1970s, many of which carry grades of 9.6 and 9.8, has been stored by a Midwest convenience store owner for years, and boast gleaming white pages, stress-free spines and brilliant colors on the covers. The store owner pulled the nicest copies from his stock issues, often with multiple copies of the same issue, and stored them away to preserve them in pristine condition. After a hiatus in the 1970s, the store owner resumed collecting, along with his grandson, in the 1980s.

“This is one of the most pristine original-owner collections Heritage has ever had the pleasure of offering at auction,” Heritage Auctions Comics Consignment Director Matt Griffin said. “We are in awe of how well these were preserved over the years and we are certain bidders will be astounded by their condition and eye-appeal as well.”