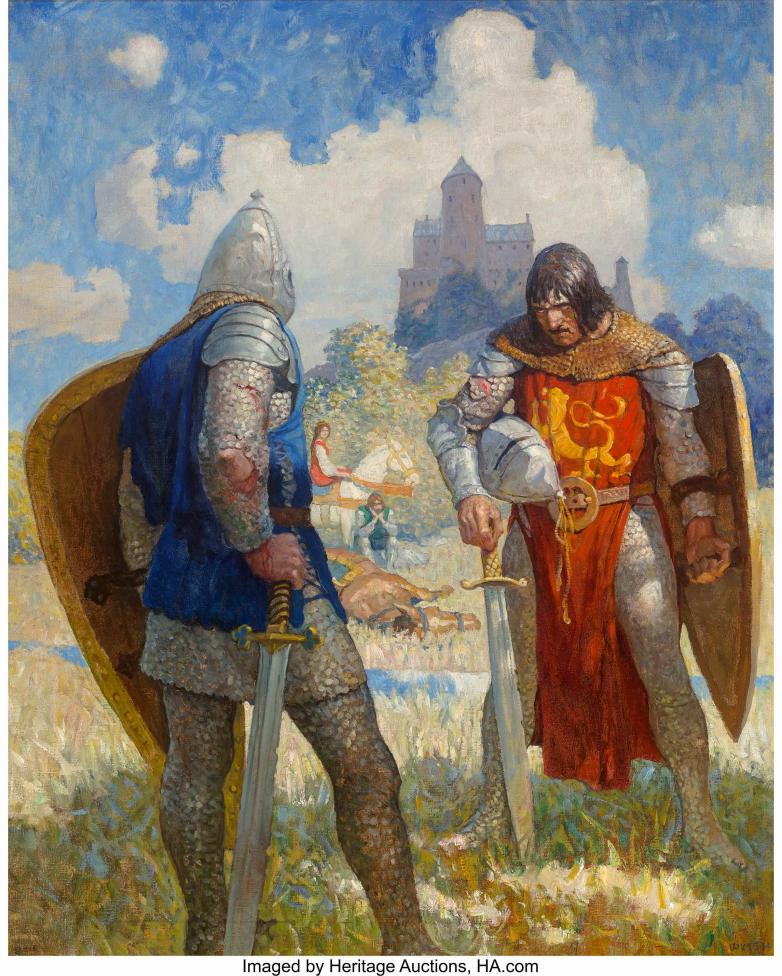 Newell Convers Wyeth's oil on canvas, "I am Sir Launcelot du Lake, King Ban's son of Benwick, and knight of the Round Table," used as an interior book illustration for The Boy's King Arthur: Sir Thomas Malory's History of King Arthur and His Knights of the Round Table (1917).

Dallas, TX – A pair of paintings by iconic American artist Newell Convers Wyeth combined to sell for more than $1.1 million, leading Heritage Auctions’ American Art Auction to a record $7,294,250 in total sales with a sell-through rate of 90 percent by value. The final total for the sale, in which auction records were established for eight artists, was the largest ever for American Art in Heritage Auctions’ history.

Multiple bidders lifted the result for Newell Convers Wyeth “I am Sir Launcelot du Lake, King Ban's son of Benwick, and knight of the Round Table,” The Boy's King Arthur: Sir Thomas Malory's History of King Arthur and His Knights of the Round Table interior book illustration, 1917 to $615,000 to claim top-lot honors. This illustration by Wyeth, the patriarch of what many consider “the first family of American Art,” shows the pivotal moment at which, after hours of battle, Sir Launcelot reveals his true identity to Sir Turquine, a move that required a fight to the death. This image is a star of the Andrew J. Sordoni Collection, 12 of which were offered in the auction.

The second painting by the same artist and the Sordoni Collection at the top of the auction, Newell Convers Wyeth “Mr. Cassidy ... Saw a crimson rider sweep down upon him ... Heralded by a blazing .41,” Bar-20 Range Yards, Part VII - Cassidy at Cactus, The Outing Magazine interior illustration, December 1906 realized $555,000. The painting is a nod to the artist’s roots painting cowboys and Western pioneers, and is significant as one of the earliest illustrations of the story of Hopalong Cassidy, the fictional cowboy created in 1904 by author Clarence E. Mulford. In this image, Slim Travennes, having been caught rustling horses, waves his .41-caliber pistol while fleeing town on horseback with Cassidy and his Bar-20 gang close behind.

Six collectors made bids on Norman Rockwell The Night Before Christmas (Santa Peering over Chair at Sleeping Child), Literary Digest magazine cover, December 22, 1923 before it finished at $500,000. It is one of 16 Rockwells offered in the sale, and one of 11 from the Collection of Jack and Martha Campbell of Houston, Texas. This image of Santa Clause peering over the back of a chair at a sleeping boy and his dog, appeared on the Dec. 23, 1923 cover of Literary Digest and was Rockwell’s fifth and final cover illustration for the magazine.

Norman Rockwell’s Girl at Mirror, The Saturday Evening Post cover study, 1954 drew a winning bid of $399,000. Accompanied by a copy of the magazine featuring the completed image, it was created originally as the cover of the March 6, 1954 issue of The Saturday Evening Post. Featured in the painting is Mary Whalen, whom Rockwell called “the best little girl model I ever had.” Rockwell executed a number of changes between his color study and the final work, including the omission of the Jane Russel headshot that appeared in the girl’s lap in the final work – an addition he later admitted he regretted adding.