New York – On June 5-13, Christie’s brought to auction an archive of over 50 letters from the acclaimed Canadian poet, singer-songwriter, and novelist Leonard Cohen (1934-2016) to his most famous muse, the inspiration for the song "So Long, Marianne," Marianne Ihlen. The first ever online auction for the New York Books & Manuscripts department totaled $876,000, selling 100 % by lot and 100% by value. The top lot of the online auction was There is a crack, a crack in everything An Italian bronze bell, c. 15th-16th century which sold for $81,250. The top letter from the auction was Alone with the vast dictionaries of language Montreal, December 1960, realizing $56,250, compared to an original high estimate of $7,000. 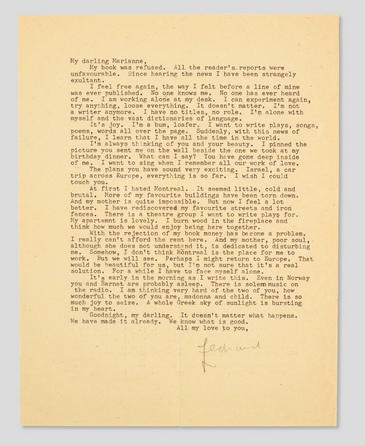 The top letter from the auction was "Alone with the vast dictionaries of language," Montreal, December 1960, realizing $56,250.

Heather Weintraub, Associate Specialist, Books & Manuscripts, New York commented: “These letters are exactly the sort of thing we love to handle: they are unpublished and fresh-to-market, with compelling content and impeccable provenance. The collection was estimated conservatively and we are absolutely delighted with the outcome. We are thrilled that this material has spoken to so many of Cohen’s admirers around the world.”