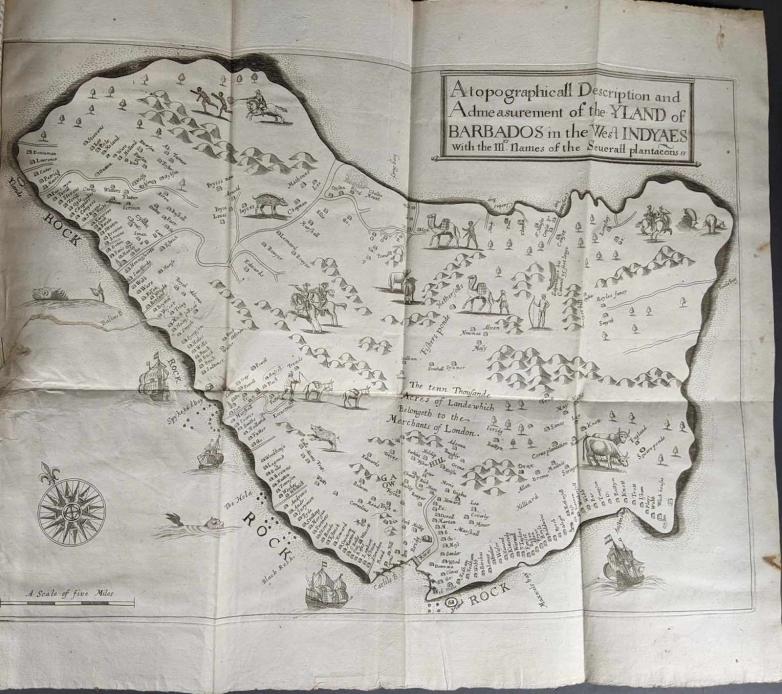 Second edition copy of A True & Exact History of the Island of Barbadoes (1673), by Richard
Ligon, with a folding map of the island, three charts and six plates Estimate $1,500-$2,500.

Falls Church, Virginia – On Tuesday, November 29, Northern Virginia’s Quinn’s Auction Galleries will present a Rare Books, Prints and Autographs auction, loaded with over 450 lots of rare books, antique maps and Americana. Absentee and Internet live bidding will be available through LiveAuctioneers.com. The auction will begin at 12 noon Eastern time.

The catalog features such items as two Presidential signing pens, signatures of the presidents from Nixon to Joe Biden and the Rehnquist Supreme Court, a copy of the Faeden map of New York from 1776, books signed by Robert Frost and other rare and desirable items.

The auction’s headliner, however, is the collection and library of Dr. Thomas E. Lovejoy (1941-2021), who became known as the godfather of biodiversity after he coined the term. Dr. Lovejoy was a pioneer in the conservation movement and a central figure in the effort to preserve the Amazon Rainforest since the 1960s. His collection showcases his dedication to the wilderness, flora, and fauna of the Amazon, as well as his interest in Brazil and South America at large. 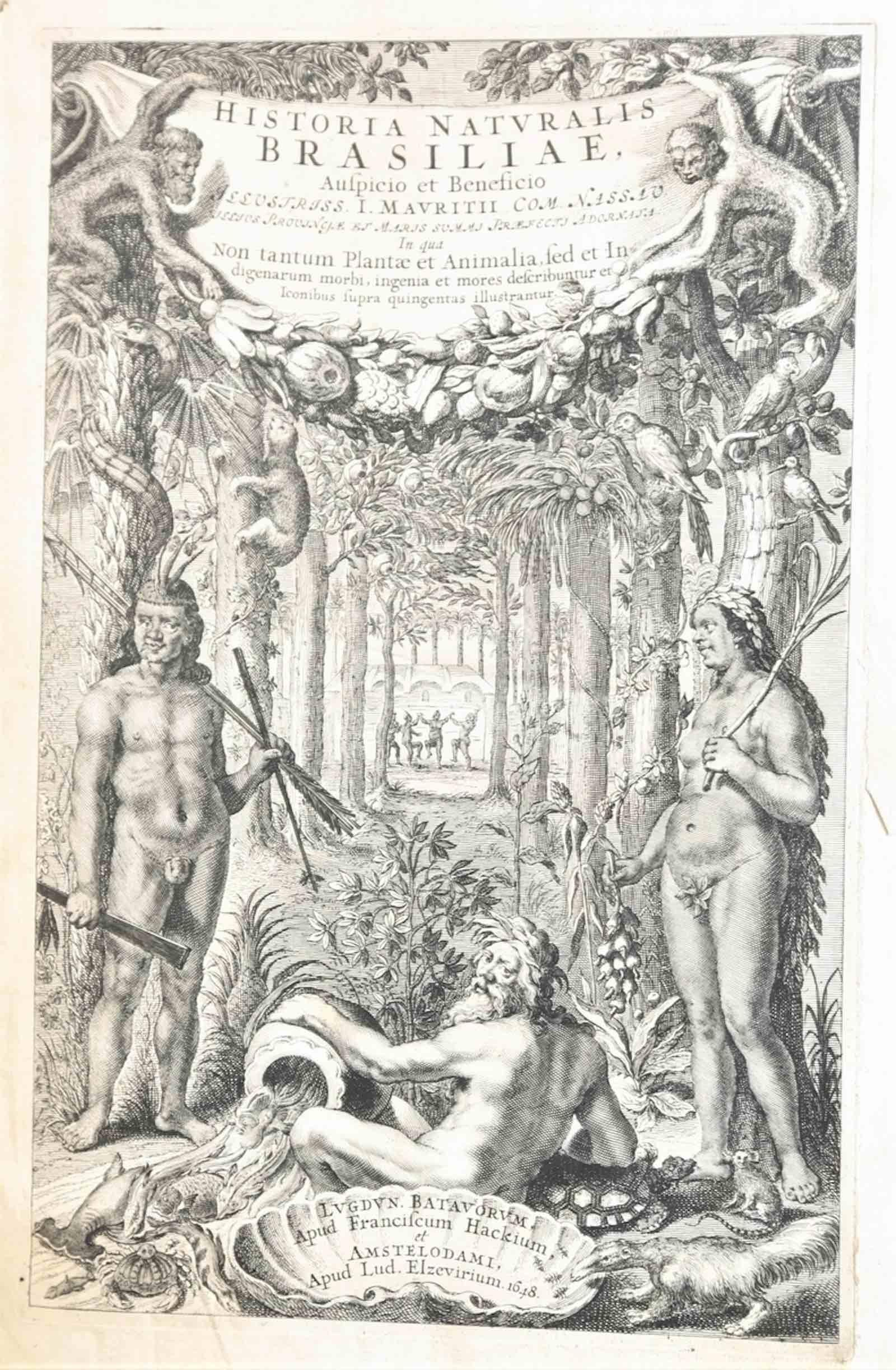 This 1648 first edition copy of Historia naturalis Brasilia, the most notable scientific work
completed in Brazil in the 17th century, is expected to realize $4,000-$6,000. 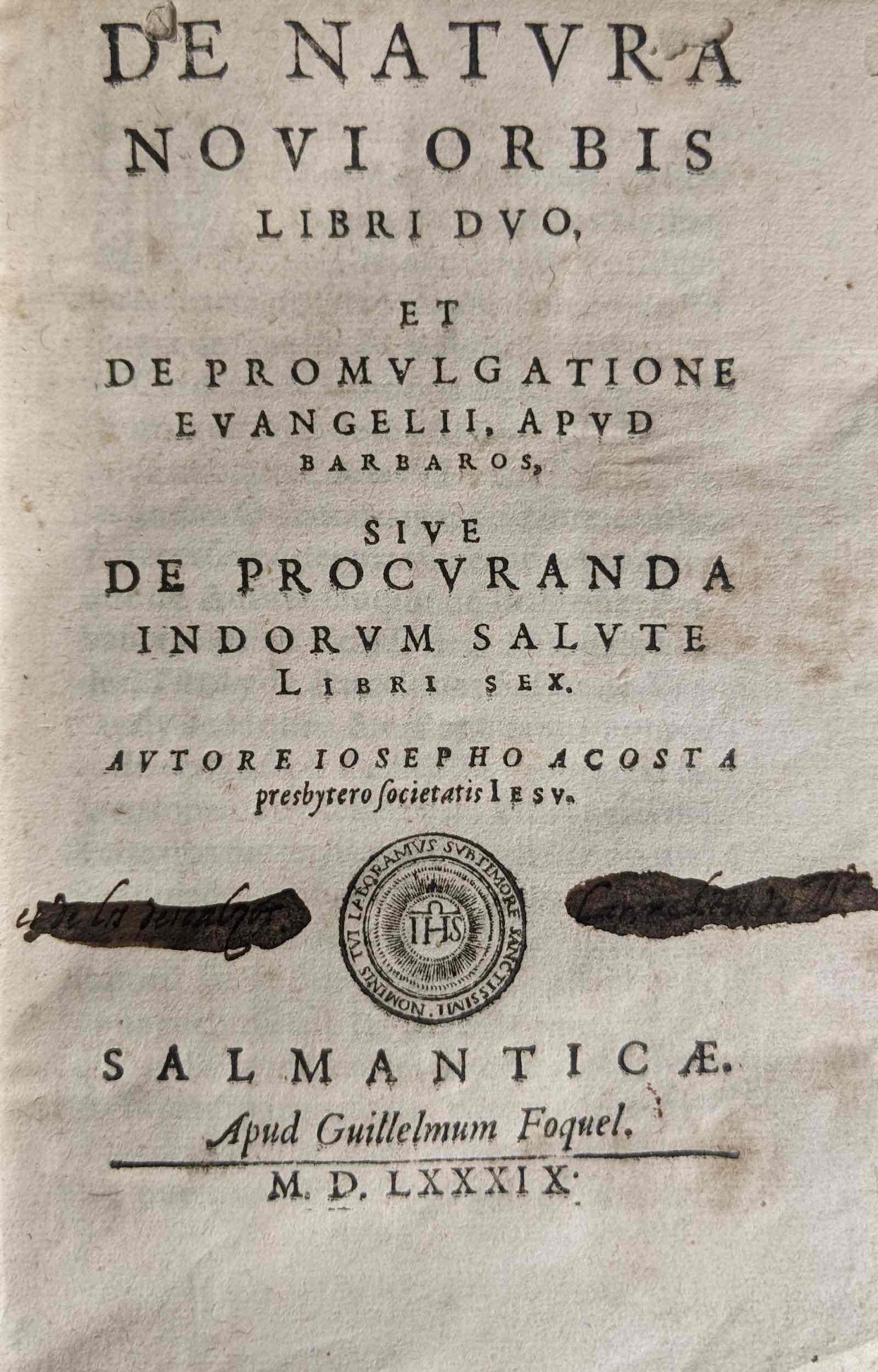 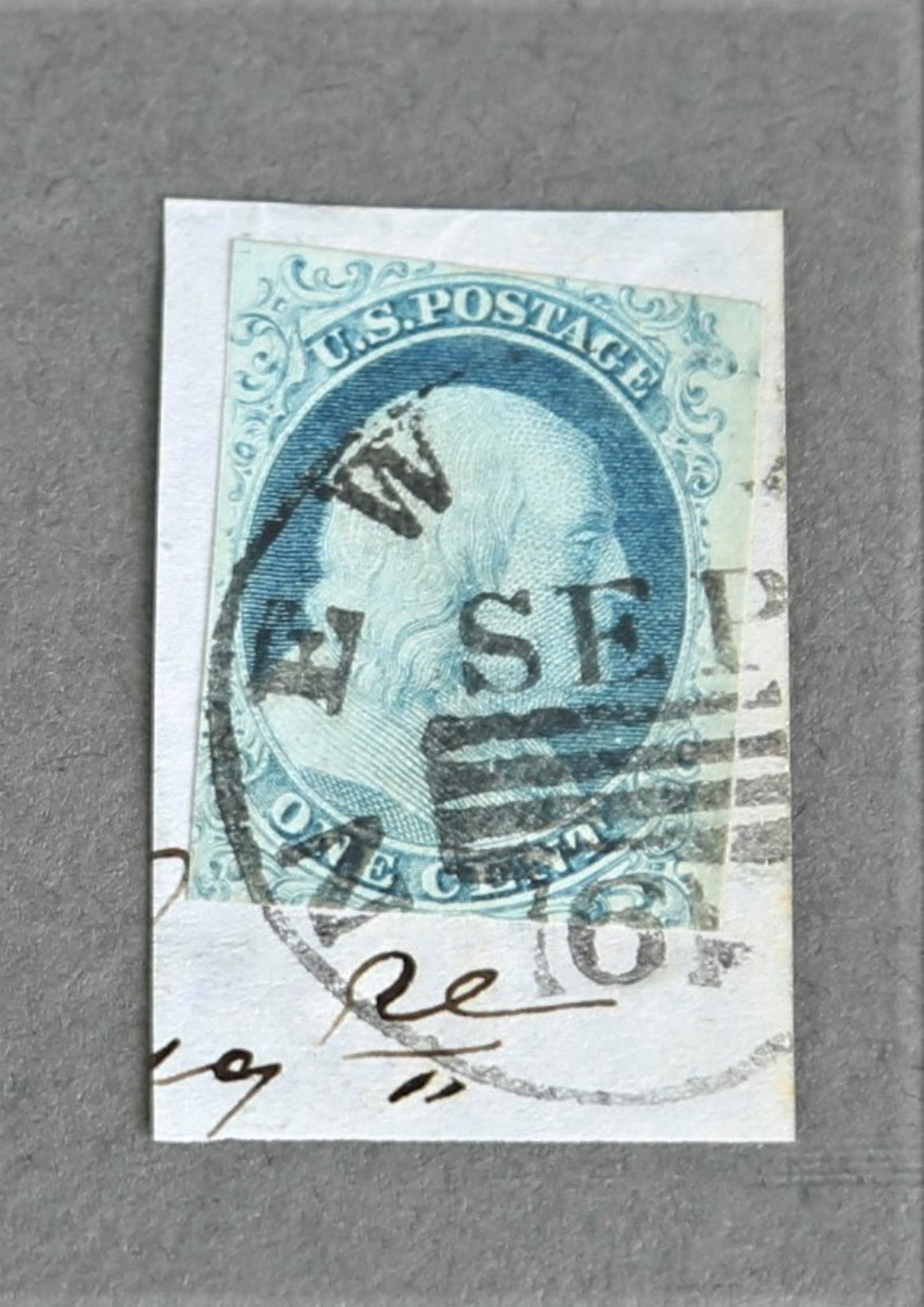 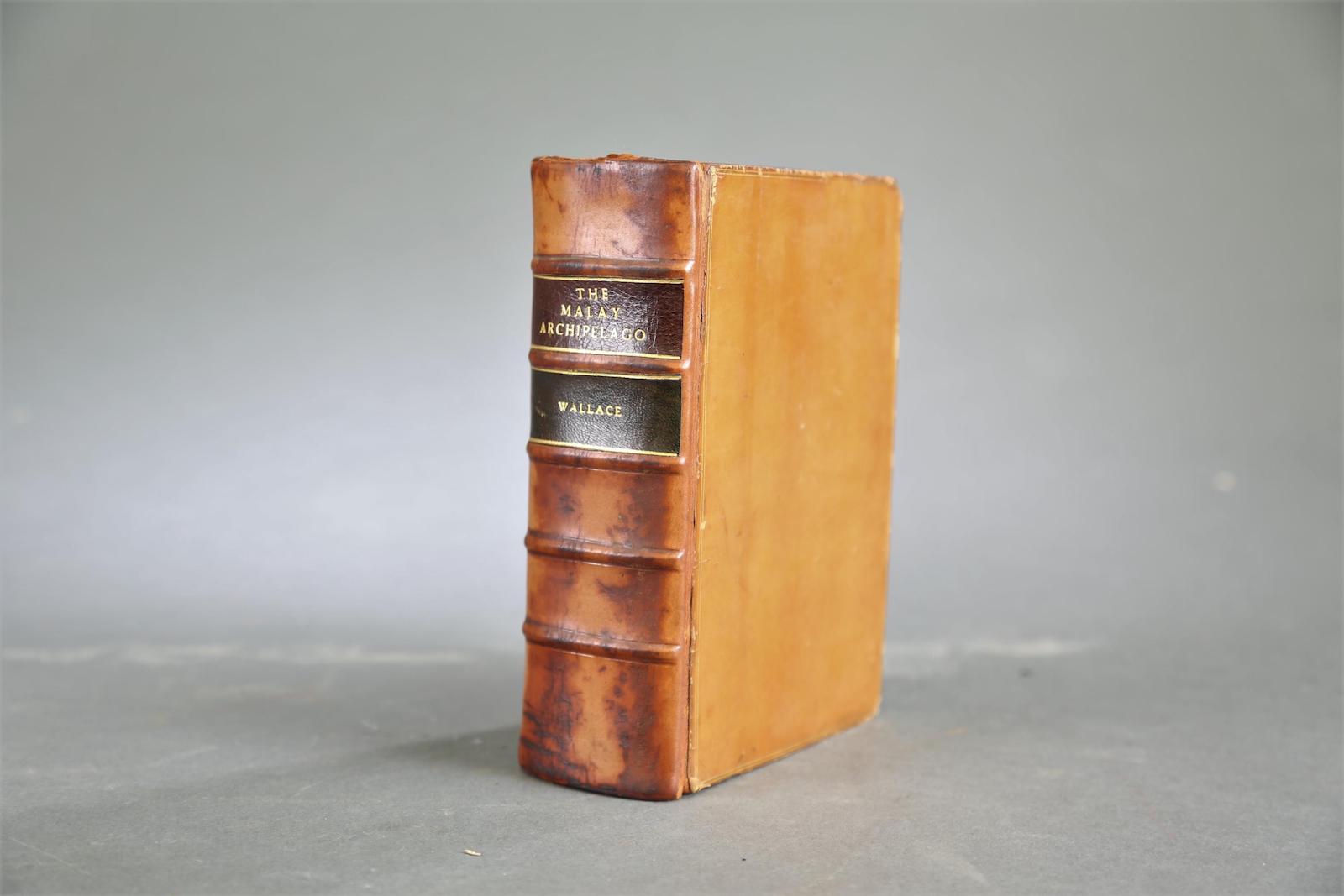 First edition copy of Alfred Russel Wallace’s book, The MalayArchipelago: The Land of the
Orang-Utan, and the Bird of Paradise. A Narrative of Travel, with Studies of Man and Nature (1869). Estimate: $1,500-$2,500.

A 1648 first edition copy of Historia naturalis Brasilia, the most notable scientific work completed in Brazil in the 17th century, is expected to realize $4,000-$6,000. The book, by Willem and Georg Marcgraf, is two parts in a one-volume folio, with over 400 woodcut illustrations after Georg Marcgraf and Albert Eckhout. The volume contains records of the first astronomical observations made in Brazil, and valuable ethnographic and linguistic information on the northeastern region of Brazil and its inhabitants.

A first edition copy of De natura Novi Orbis libri duo by Jose de Acosta, dated 1589 on the title page but 1588 on the second title page and colophon, should find a new home for $2,000-$3,000. Presented on contemporary vellum, with ink title to the spine, the book is divided into two treatises. The first describes the history and physical features of America. The second is chiefly concerned with the conversion of the natives to Christianity, usually omitted in the translation. This would become one of the most influential guides for missionaries in the New World.

A second edition copy of A True & Exact History of the Island of Barbadoes (1673), by Richard Ligon, has an estimate of $1,500-$2,500. The folio, with a folding map of the island, three charts and six plates, is from the library of John Roland Abbey, the renowned book collector and bibliographer of travel books. It’s an early account of Barbados, with documentation on cocoa, cucumbers and pomegranates, as well as illustrations of bananas and pineapples.

A first edition copy of Alfred Russel Wallace’s book, The MalayArchipelago: The Land of the Orang-Utan, and the Bird of Paradise. A Narrative of Travel, with Studies of Man and Nature (1869) is estimated to bring $1,500-$2,500. The book, two volumes in one, has been described as “clearly one of the finest scientific travel books ever written." Included is a folding map of Wallace’s route, backed on linen. Wallace, who independently conceived the theory of evolution through natural selection, appropriately dedicated the book to Charles Darwin.

A framed, oval photograph signed by Tsaritsa Alexandra Feodorovna – the last Empress of Russia as the consort of Emperor Nicholas II from their marriage in 1894 until his forced abdication in 1917 – showing her holding Tsesarevich Alexei as a baby in 1904 (and later also signed by TsesarevichAlexei as well), should fetch $4,000-$6,000. Both signatures are in Cyrillic (hers as “Alexandra” in bold black ink). The photo is housed in the original frame.

A copy of William S. Auchincloss’s book Ninety Days in the Tropics, or Letters from Brazil (1874), featuring nine mounted photographs of Brazil, carries an estimate of $300-$500. The book was described as “a lecture on the importance of extending and developing our commercial relations with SouthAmerica.” It’s the first time the book has been offered at auction in over 100 years, the last time being in 1911.

A five-volume set of The Christmas Books by Charles Dickens (1844-1848), handsomely bound in modern ¾ red Morocco gilt over marbled boards, should rise to $1,200-$1,600. The books include Dickens’s classic A Christmas Carol, plus The Chimes: A Goblin Story of Some Bells That Rang an Old Year Out and a New Year In; The Cricket on the Hearth: A Fairy Tale of Home; The Battle of Life: A Love Story; and The Haunted Man and the Ghost’s Bargain: A Fancy for Christmas Time. Each book is beautifully illustrated with wood engravings.

A baseball signed by former President Harry Truman, signed on the “sweet spot” in black pen, has an estimate of $2,000-$3,000. The ball is accompanied by a letter from George Bradshaw, stating the ball was signed by Truman while he was attending a Washington Senators game in 1952.

An extremely rare first state engraving of a full bust drawing of George Washington in uniform, executed by the French engraver Juste Chevillet and drawn in Paris circa 1785 by Michel-Honore Bounieu from a painting provided by the Marquis de la Fayette by Charles Wilson Peale, is estimated to command $700-$1,000. The oval rendering shows a tree and landscape in the background. It’s titled but, remarkably, Washington’s name is misspelled (as “Wasington”).

A fine example of an 1851 Benjamin Franklin 1-cent stamp (Blue, Type lb, 5A), noted by Scott as one of the two best examples of this type, should finish at $4,000-$6,000. The stamp is accompanied by a 1979 American Philatelic Expertizing Service certificate.

No in-person floor bidding will be available. All bidding will be remote, either by phone, absentee, or live via the Internet through Quinn’s website, LiveAuctioneers or Invaluable. An open preview will be held at the auction gallery (360 S. Washington St., Falls Church, VA 22046), Wednesday, November 17, thru Monday, November 28, from 11-4 Eastern time.

END_OF_DOCUMENT_TOKEN_TO_BE_REPLACED

First Edition of the Translated Bhagavad Gita to Auction