Copy of The Federalist Given by James Madison Heads to Auction 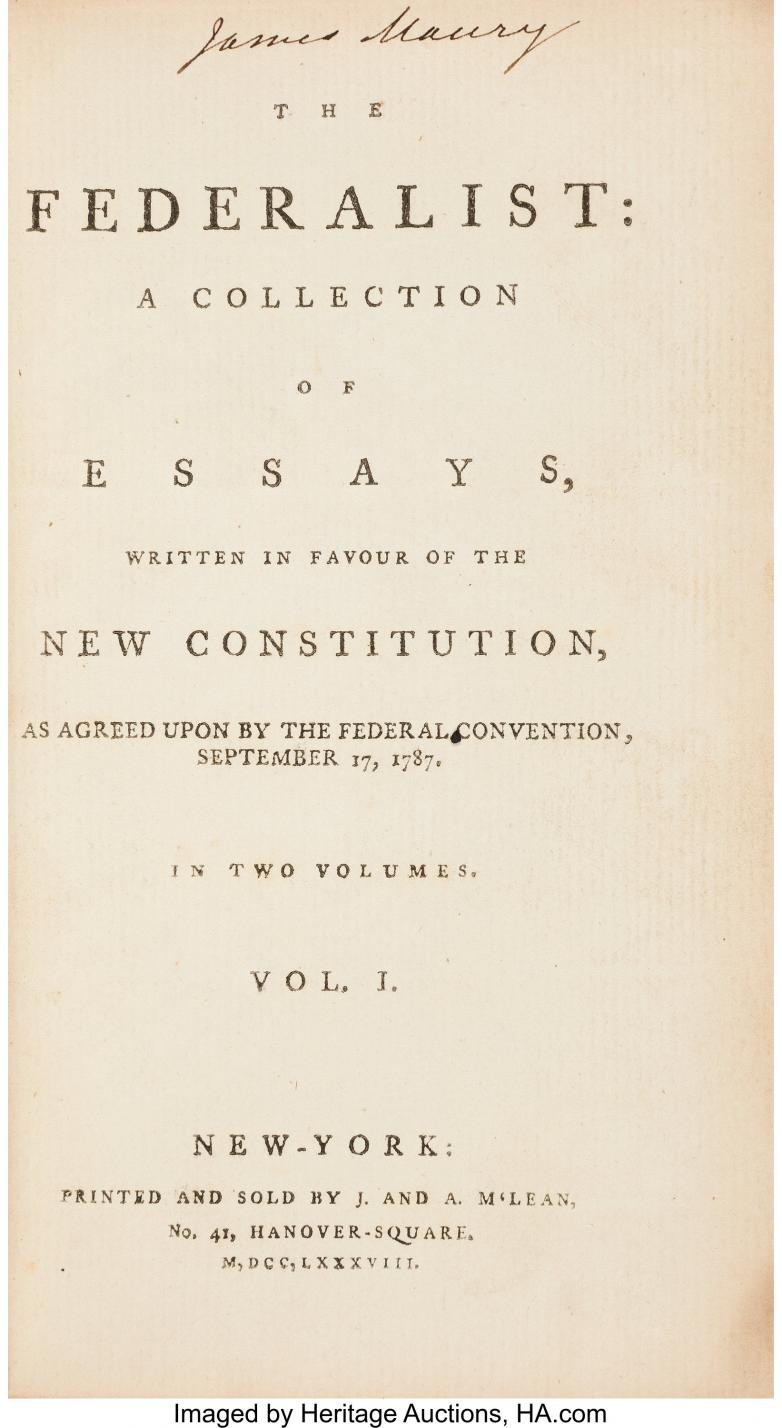 A rare copy of The Federalist Papers that was personally given by James Madison to an American diplomat is estimated to make $250,000+ at auction in March.

Dallas, TX – An extremely rare copy of The Federalist Papers that was personally given by James Madison to American diplomat and overseas consul James Maury will cross the auction block for the first time in Heritage Auctions’ Rare Books Auction March 4 in New York.

The two-volume The Federalist: A Collection of Essays, Written in Favour of the New Constitution, as Agreed Upon by the Federal Convention, September 17, 1787 (estimate: $250,000+) is considered by American historians as the cornerstone of the new nation’s theory of government, written “to meet the immediate need of convincing the reluctant New York State electorate of the necessity of ratifying the newly proposed Constitution of the United States,” with the first of what would become a collection of 85 anonymous essays, submitted under the pseudonym “Publius,” appearing Oct. 27, 1787 in The Independent Journal, or The General Advertiser (PMM).

The “Publius” pseudonym was used by the three authors: Madison, Alexander Hamilton and John Jay. What moves this lot from historically significant to the kind of rare book around which any collection can be built is the fact that it was given directly by Madison to Maury, and the remarkable condition of the 233-year-old volumes.

This copy is extremely important because it identifies by name one of the authors of the anonymous publication. That the authors wrote under the collective “Publius” pseudonym was not widely known at the time, making the fact that Madison identified himself to Maury extremely significant, because it alludes to the importance of Maury, both to the Founding Fathers and in representing the young nation and its political values overseas.

Although there are no true presentation copies of the Federalist Papers, two personal association copies are known to exist. Aside from the present copy, the only other known copy, a gift from Hamilton, is in the collection of the Pennsylvania Historical Society on deposit at the Library Company of Philadelphia.

“These books are an important part of American history,” Heritage Auctions Rare Books Director James Gannon said. “Only about 500 copies are believed to have been printed, and the fact that this one was presented by one of the authors makes the demand for it far greater. Because the only other known copy is housed in an institution, this is the only copy like it that ever has been made available to the public. This copy is the only such copy ever offered for sale.”

The Federalist is compelling because it is the founding fathers’ own insight into what the Constitution is and what this country should be. The continued importance of the text since its original publication is laid out in Printing and the Mind of Man: “As a commentary on the Constitution by men included among its principal architects The Federalist has been used from the beginning of the nineteenth century to modern times as an interpreter of the Constitution not only by laymen but by lawyers and Justices of the U. S. Supreme Court.”

The essays that comprise The Federalist were written and published in newspapers throughout the nation to convince these states to ratify this new Constitution.

Printed in book form and sold by J. and A. M’Lean in 1788, this first edition of the collected essays is one of the scarce “thick paper” copies. Each volume bears a holograph note in Maury’s hand on the recto of the front flyleaf, noting how he came to possess his copy of The Federalist and cementing its remarkable association: “James Maury / From Mr Madison / one of the supposed / authors.”