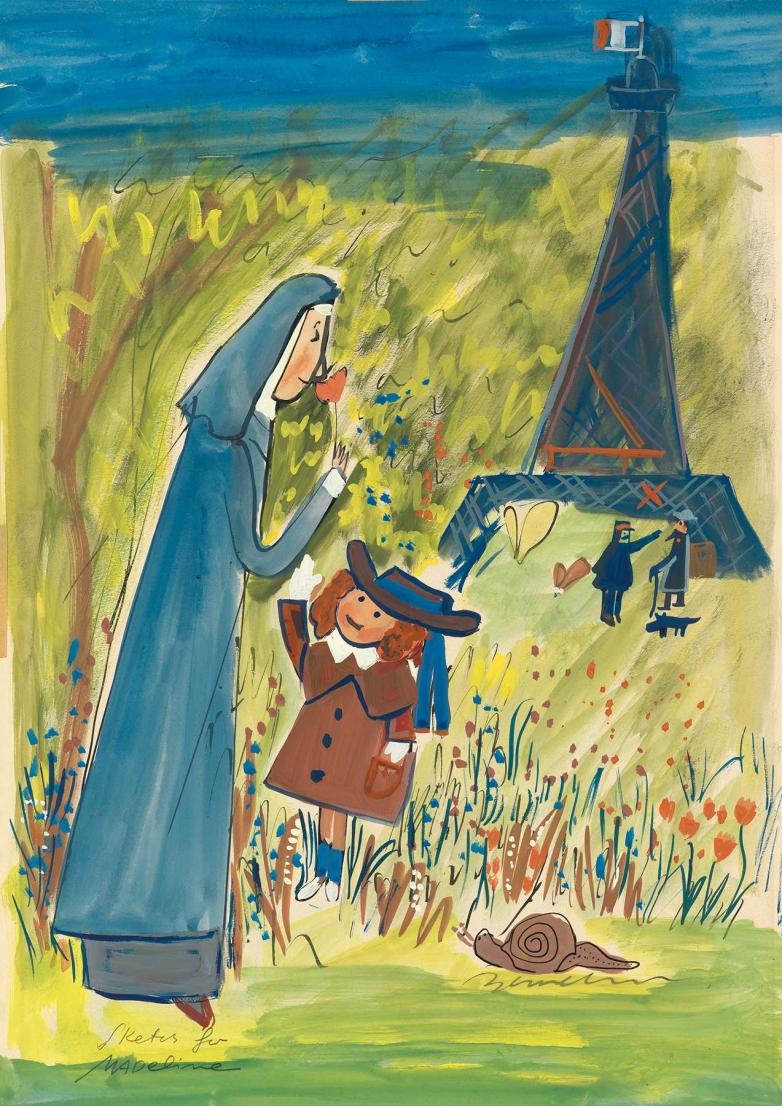 New York — Swann Galleries’s sale of Illustration Art on Tuesday, December 10 featured an array of original works, from well-known characters of children’s literature to striking New Yorker covers and theater designs. The auction was a success, with seven of the top 20 lots ultimately acquired by institutions.

Children’s illustrations proved to be the centerpiece of the sale with a gouache and ink sketch for Ludwig Bemelmans’s Madeline, which featured Miss Clavel and Madeline picking flowers in front of the Eiffel Tower, selling for $22,500. Also by Bemelmans were two 1947 watercolor, ink and wash drawings for the artist’s A Tale of Two Glimps that sold for $7,500. Additional childhood favorites included H.A. Rey’s 1939 watercolor and gouache work for Rafi et les 9 singes featuring several of the monkeys skiing down Cecily the giraffe’s neck ($15,000); Ernest H. Shepard’s 1949 pen and ink drawing for Kenneth Grahame’s Bertie’s Escapade ($13,750); and Harry Rountree’s 1901 illustration for Alice’s Adventures in Wonderland, showing an irate Queen of Hearts ($8,125).

Further nostalgia-filled illustrations featured one of Dr. Seuss’s 1937 calendar designs for the Thomas D. Murphy company at $17,500. Also by Seuss was a 1955 billboard advertisement for Holly Sugar starring a Grinch-like character, which earned $15,000. Two original four-panel Peanuts comics by Charles Schulz performed well: Your Hero Had Feet of Clay, Huh?, 1963, featuring Charlie Brown and Patty, and The Biggest Star Measured So Far, 1961, featuring Linus and Lucy. They sold for $16,250 apiece.

The popular New Yorker section of the sale delivered exceptional results. Charles Addams’s Nevermore, an iconic image of Edgar Allan Poe struggling to find the voice for his famous narrative poem, brought $22,500. Ilonka Karasz’s cover illustration for the August 27, 1927 issue, Chop Suey, garnered a record for the artist at $13,750.

Edward Gorey works from the Edward Gorey Charitable Trust included the magazine illustrations: Print or Perish, a 1988 pen, ink watercolor and wash work for the cover of the January/February issue of Print Magazine ($16,250); and He Will Not Be Right Back After this Message, a 1980 pen, ink, watercolor, graphite and wash illustration for TV Guide Magazine ($8,125). Also of note from the trust were costume designs for the Andre Eglevsky Company 1975 production of the second act of Swan Lake ($10,000) and the 1984 exhibition poster design for Gorey Stories: Books & Drawings by Edward Gorey ($12,500).

Christine von der Linn, the house’s Illustration Art director noted of the sale, “I was so pleased to have choice examples from some of the most famous names in illustration in this sale and see them make the list of top lots. It proves that narrative art continues to be a highly collectible field and that Swann is a terrific place to cross-market those works with our long history of specialization in Americana, literature, fine art, and graphic material.”

Swann Galleries is currently accepting quality consignments for the spring 2020 season, with another offering of Illustration Art scheduled for June. Visit swanngalleries.com or download the Swann Galleries App for more information.