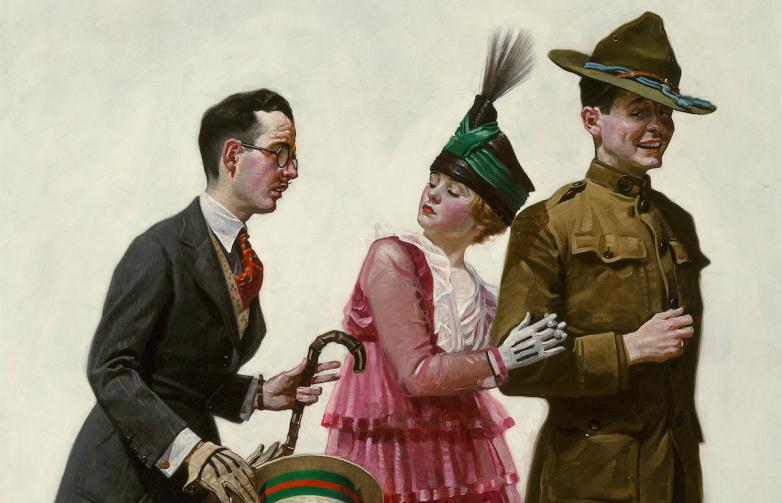 Excuse Me!, a centerpiece of Heritage Auctions’ May 7 American Art Signature Auction event, was Norman Rockwell’s very first cover for Judge, appearing on the front of the July 7, 1917, issue. Estimate: $400,000+

Dallas, TX – Judge, one of the great American magazines of the late 19th and early 20th centuries, was renowned for many things: its wit, its politics, its immense circulation and its role as a launching pad for once-editor Harold Ross’ The New Yorker. But the satirical publication is perhaps best known for its stable of pioneering illustrators – among them Buster Brown creator Richard Outcault and James Montgomery Flagg, designer of the Uncle Sam “I Want YOU for U.S. Army” recruitment poster – and as one of Norman Rockwell’s earliest canvases. Indeed, Judge was high on the list of publications to which the illustrator would take his works during his ascendancy as one of America’s most cherished artists. 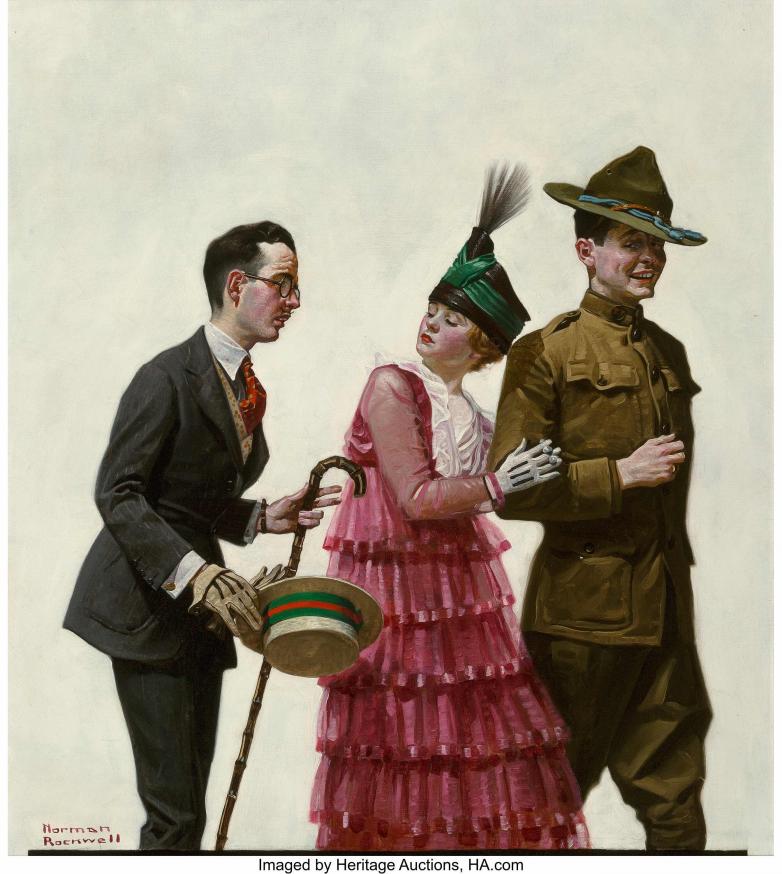 Some of Rockwell’s most famous and coveted early-days pieces came from Judge, for which he made only six covers, among them A Trench Spade (Soldiers Playing Cards) and Stolen Goods, both from 1918. Excuse Me!, a centerpiece of Heritage Auctions’ May 7 American Art Signature Auction event, is another such work – and Rockwell’s very first cover for Judge, appearing on the front of the July 7, 1917, issue.

That’s only appropriate, as in this rich, playful piece a young woman in pink ruffles declares her independence from one man to link arms with another, a soldier seemingly giddy at his good fortune.

“It embodies all the hallmarks one loves to see in a great Rockwell masterwork,” says Aviva Lehmann, Heritage’s New York-based Director of American Art. “There is an engaging and timeless story being told, executed in Rockwell’s unmatched painting style. Above all else, Rockwell is one of the greatest storytellers of the 20th century.”

This work, also known as Soldier Escorting Woman, was first sold at a Liberty War Bonds auction during World War I; from there it found its way into private collections. It has not been to auction in more than a century. The work is expected to sell in excess of $400,000. This work showcases one of Rockwell’s earliest renderings of the American soldier, an image with which he would become associated; it’s as stunning as it is significant. As Lehmann noted one recent afternoon while standing in front of the work, it’s also as playful as it is romantic, as irreverent as it is respectful.

“It portrays a little love triangle, a whole movie in a single still, which is exactly what Golden Age Illustration is all about.” she said. “And the soldier, behind that knowing grin, knows he won.”

And the details – the ornate ruffles of the woman’s pink dress, the flecks of color on the man’s collar and cuffs, the bending of the fingers and the curling of the mustache – are so clearly the work of a young painter as capable as any old master. No photo of the painting can do justice to its almost three-dimensional quality; it’s as rich and lively as any Rockwell before or certainly after, when he made his mark as the preeminent chronicler of the everyday American.

“It’s always a thrill when a Rockwell becomes available,” Lehmann says. “Especially a great one like Excuse Me!”