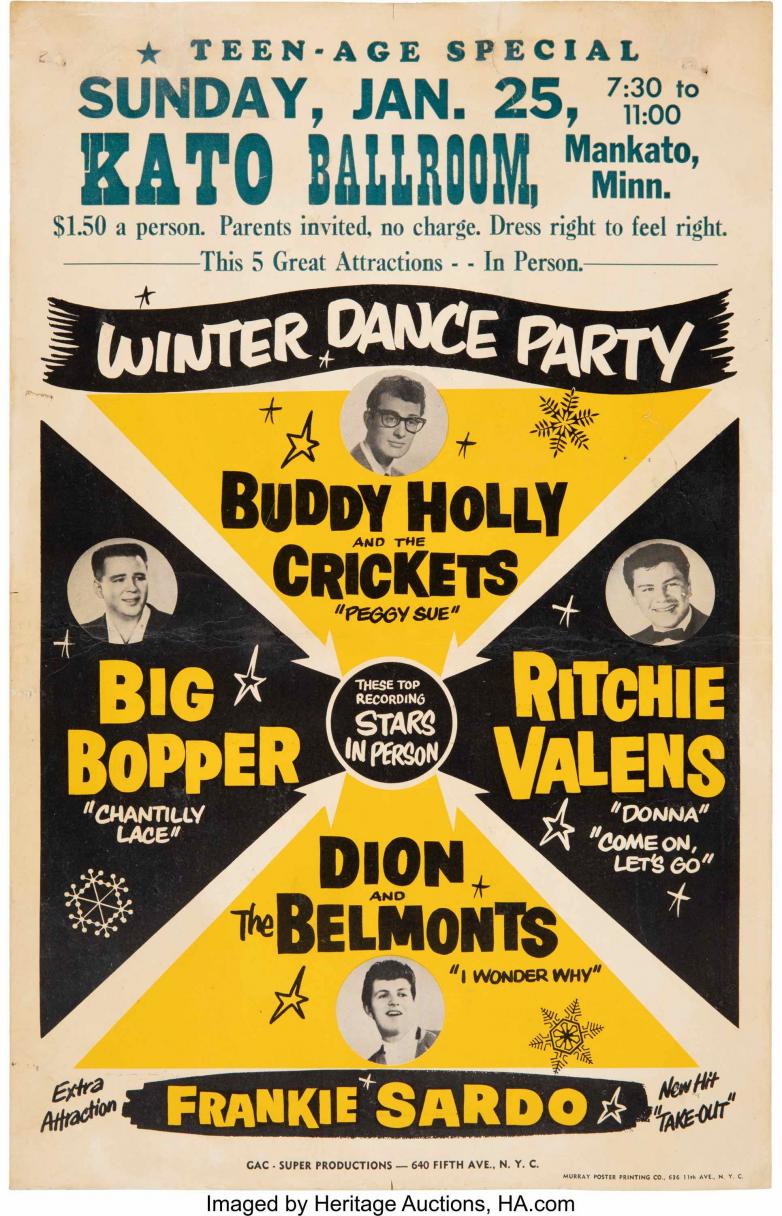 Dallas, TX – An exceedingly rare poster promoting a concert just a week before the plane crash that killed three performers is being brought to auction for the first time in Heritage Auctions’ Entertainment & Music Memorabilia Auction April 4-5 in Dallas, Texas.

Considered the “Holy Grail” of concert poster collecting, this Buddy Holly & The Crickets Stunningly Rare 1959 Winter Dance Party Concert Poster (estimate: $50,000-100,000) announced the Winter Dance Party tour stop in Mankato, Minnesota, Jan. 25, 1959 by five acts: Buddy Holly and the Crickets, the Big Bopper, Ritchie Valens and Dion, the Belmonts and Frankie Sardo. The concert took place just eight days before the last performance on the tour (for which no poster or handbill ever was made); the first three of the acts died in the Feb. 2 plane crash that came to be known as “rock-n-roll’s first tragedy.” Sardo and Dion and the Belmonts were not aboard the flight.

“This is arguably the best and rarest rock concert poster of all time,” Heritage Auctions Entertainment & Music Memorabilia Consignment Director Pete Howard said. “It comes from the Winter Dance Party tour. Only 11 shows happened before the plane crash, and only three posters are known to exist from those shows … and this is the first one ever sold at auction.”

The other two known posters from the Winter Dance Party tour are from concerts held in other cities, making this a one-of-a-kind collectible. On the rare occasions when a Winter Dance Party poster trades hands, such transactions are carried out privately, often between the world’s elite poster collectors.

The offered poster was pulled off the wall by a female teenager as she filed out of the ballroom after the last song, and is offered at auction with a letter of provenance from her.

The poster was printed with one idea in mind: to get teenagers to the concert. To that end, it includes elements that would be hard to imagine on materials heralding modern-day concerts, including the $1.50 admission price, the invitation for free admission for parents, and a reminder to “Dress Right to Feel Right.”

The poster holds even more appeal because of the popularity of the music, and the artists who created it. As was the norm on posters from the era, the promoters of the concerts included the name of popular songs by the names of the artists who performed them. The songs listed on this poster – Buddy Holly’s Peggy Sue, the Big Bopper’s Chantilly Lace, Ritchie Valens’ Donna and Come On, Let’s Go and Dion and the Belmonts’ I Wonder Why – remain popular with fans generations after the tragic crash.

To see additional images and to learn more about this poster and the other items in Heritage Auctions’ Entertainment & Music Memorabilia Auction, visit HA.com/7217.