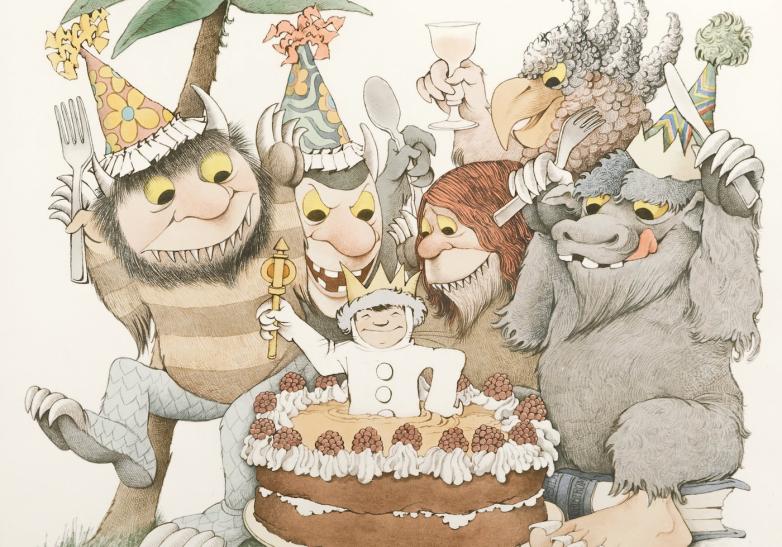 Eight-hundred fifty bidders participated in the near-sellout event, which saw records set for such revered and influential artists as Maurice Sendak, Margaret Keane, Manierre Dawson and James Lesesne Wells. Myriad artists also saw their estimates shattered and profiles elevated, chief among them Joseph Francis Kernan, whose circa-1940 advertisement for DB&M's Royal Bohemian Beer sold for $137,500. It would appear Kernan has finally shed his sobriquet as "the poor man's Norman Rockwell."

Heritage Auctions is also proud to announce that Wells' circa-1930 Wanderers, which set an auction record for the artist at $37,500, was acquired by the Delaware Art Museum. Wanderers, which depicts three Black women migrating (likely northward from the South), is among the artist's major early works, having received the Gold Medal at the Harmon Foundation's 1931 "Exhibition of the Work of Negro Artists."

"We pared down this auction to highlight all the genres that make up what we call American art," says Senior Vice President Aviva Lehmann, director of American Art. "We showcased these works in Chicago, New York City and Dallas, always to great acclaim, and knew we had a hit on our hands. But I had no idea it would so wildly exceed my expectations thanks to participation from both beloved institutions and private collectors."

Topping the list of historic lots was a familiar favorite: Joseph Christian Leyendecker, whose First Long Suit, painted for the Sept. 18, 1937, cover for The Saturday Evening Post, sold for $615,000. That not only bested its high estimate, but became the second-highest price ever paid for a painting by the fashion-ad illustrator behind only 1914's Beat-up Boy, Football Hero, which sold at Heritage Auctions one year ago for a record-setting $4,121,250 (the first and so far only Leyendecker to reach seven figures).

Another Saturday Evening Post cover proved to be one of the auction's smash hits: Stevan Dohanos' stunning After Church, which appeared on the magazine's cover on April 16, 1949. One of myriad works that sparked bidding wars among collectors, this painting of the Wilton Episcopal Church congregation exiting Easter Sunday services sold for $225,000, more than twice its high estimate.

Leyendecker and his Illustration Art compatriots were certainly in excellent company atop the list of top-performing lots: Rembrandt Peale's circa-1855 "porthole" portrait of George Washington soared to a final price of $591,000 after several bidders tussled over this historic work. From the collection of American treasures assembled by Portland real estate developer and philanthropist Melvin "Pete" Mark, this was the second-highest price ever paid at auction for a Washington "porthole" (The current record of $662,500 was set by Heritage Auctions in 2013.)

When the Peale painting sold, the auction room burst into applause – for the first but not last time throughout the event that spanned the breadth of American art, from Ashcan to Impressionism, Regionalism to Hudson River, illustration to sculpture.

Indeed, there were cheers, too, for one of the oft-exhibited works in this auction: George Tooker's Un Ballo in Maschera, a tempera on gessoed board from 1982 that sold for $325,000. Most recently displayed at the Columbus Museum of Art for a Tooker retrospective, this is among the artist's most reproduced works. But the original now has a new home.

Close behind was Severin Roesen's 1850 Still Life with Fruit and Flowers in a Landscape, a masterwork from one America's preeminent early still-life painters, which sold for $300,000.

The auction room again erupted with applause when Sendak's Let the Wild Rumpus Start! (Happy Birthday Wild Things!), painted in 1988 to celebrate the 25th anniversary of Where the Wild Things Are, sold for $212,500. Heritage set the previous Sendak auction record last November, when the original art for an Art Institute of Chicago poster sold for $175,000. But as Lehmann notes, "Everyone loves Sendak, and it's high time for him to climb to the level of Rockwell."

Collectors are beginning to eat him up, they love Sendak so.

One of Lehmann's personal favorites in this auction was Gertrude Abercrombie's self-portrait Lonely House from 1938, when it was painted for the Illinois Arts Project of the Works Progress Administration. It was made when the artist was 30 years old, and is an honest, cheeky work whose intention is far more than a depiction of the rural "American Scene" requested by the WPA.

It more than doubled its estimate when it sold Tuesday for $175,000.

And only a few moments later, Ernie Barnes' circa-1979 Pool Hall, among the most recognizable pieces by the pro footballer-turned-painter and a lyrical work of art from the master of movement, realized $131,250.

But even the seemingly smallest moments contained their shares of enormous thrills: Manierre Dawson's 1913 oil-on-canvas Family opened live bidding at $15,000. But a heated bidding war drove the work to its final price of $137,500, an auction record for the artist. Not long after that Margaret Keane's 1962 painting The Lookout sold for $47,500, also an auction record for the beloved pop-culture phenomenon adored by Andy Warhol and portrayed by Amy Adams.