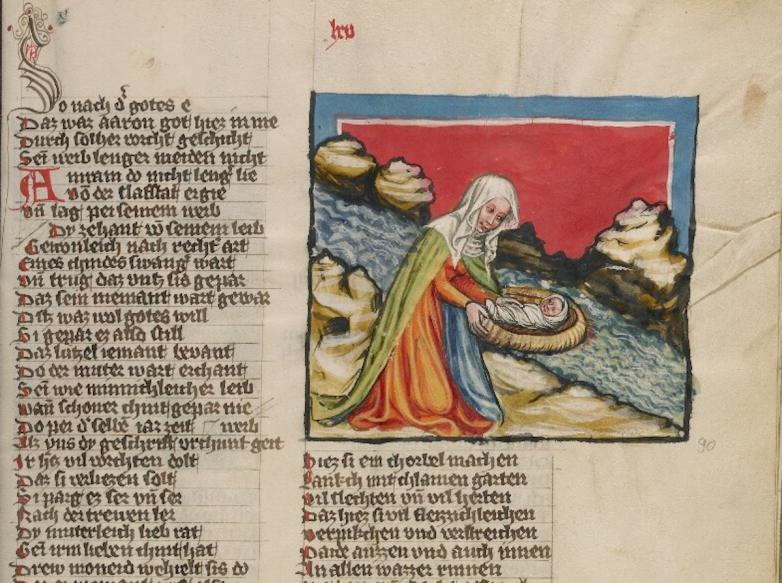 Detail from Moses Placed in the River, about 1400–1410. Tempera colors, gold, silver paint, and ink.

Los Angeles – Images drawn from the Hebrew Bible (known to Christians as the “Old Testament”) were among the most popular subjects for Christian illuminated manuscripts in the Middle Ages.

Drawn from the Getty Museum’s renowned collection of manuscripts, and featuring the recently-acquired Rothschild Pentateuch, Painted Prophecy: The Hebrew Bible through Christian Eyes brings manuscripts that explore the medieval Christian understanding of Hebrew scripture into dialogue with the Rothschild Pentateuch, a masterpiece of the Jewish manuscript tradition. Together, these objects from different religious traditions demonstrate how the Hebrew Bible was a living document, its contents subject to interpretation dependent on time and place.

“Each new acquisition allows us to expand and reconsider the broader themes that emerge within our collections and ultimately to see a richer diversity of perspectives within their narratives,” explains Timothy Potts, Maria Hummer-Tuttle and Robert Tuttle Director of the J. Paul Getty Museum. “In the case of this exhibition, the Rothschild Pentateuch – one of the Museum’s most important acquisitions of recent years – complements our existing collection of illuminated manuscripts and allows us to see connections and distinctions between the stories told in the Jewish and Christian faiths, some of which engendered cultural conflicts that have carried through to the present day.”

Stories and figures from the Hebrew Bible, the Old Testament, appear in spectacular examples of medieval manuscript painting. The images on view illuminate essential aspects of medieval Christian beliefs and a range of cultural attitudes, including the understanding of history as prophecy, ideas about women in society, and hostilities between Christian and Jewish communities.

Medieval Christians considered many Old Testament stories to be part of their own history, recording Biblical events in chronicles along with additional accounts of famous wars, and the exploits of past kings. According to the Christian belief system, every event in the Old Testament foreshadowed one in the New.

Medieval depictions of women in Christian manuscripts, couched in imagery from the Old Testament, reflect the ideologies and stereotypes that were intended to guide female behavior. The Hebrew Bible describes and celebrates the exploits of many heroines who were known as religious leaders, prophets, and women who bravely acted to defend their people from enemies. The figure of Eve, introduced in the book of Genesis as the first mortal woman, is an example of an Old Testament woman who took on new meaning to Christians. Unlike Eve, the Virgin Mary was a redemptive figure. These female types were instrumental in shaping the concepts of good and bad women in the Middle Ages.

Though the interpretation of Hebrew scripture formed the foundations of Christian belief during the Middle Ages, Christian attitudes toward Jewish populations living in medieval Europe were fraught. Old Testament figures were held up as examples of both positive and negative behavior, yet anti-Jewish sentiment was widespread. Many images in manuscripts reflect Christian prejudices against Judaism and played a key role in the rise of violent and discriminatory acts against Jews. Examples ranged from forced conversions and laws restricting their activities to expulsions from various countries and mass murders.

Often obscured in the telling of this history are the Jewish communities who practiced their faith throughout the medieval period. A vibrant intellectual, religious, and artistic tradition can be seen in the production of texts and material objects that bear witness to the continued contributions of Jewish writers and thinkers throughout the European Middle Ages. On view from local collections are examples of early Hebrew printing as well as the Rothschild Pentateuch, one of the most elaborate illuminated Hebrew Bibles to survive from the era.

“The objects on view in the exhibition reveal how deeply interconnected Christian and Jewish ideas of the divine were in the Middle Ages, a relationship fostered by the shared sacred text that was foundational to both traditions,” said Larisa Grollemond, Assistant Curator of Manuscripts. “The different interpretations and understanding of that text, seen through the lens of manuscript illumination and the book arts, tell a complex story about the lived experiences and faiths of medieval people.”

Painted Prophecy: The Hebrew Bible through Christian Eyes will be on view March 8 through May 29, 2022.