One of Fantasy Literature’s Most Influential Paintings Comes to Market 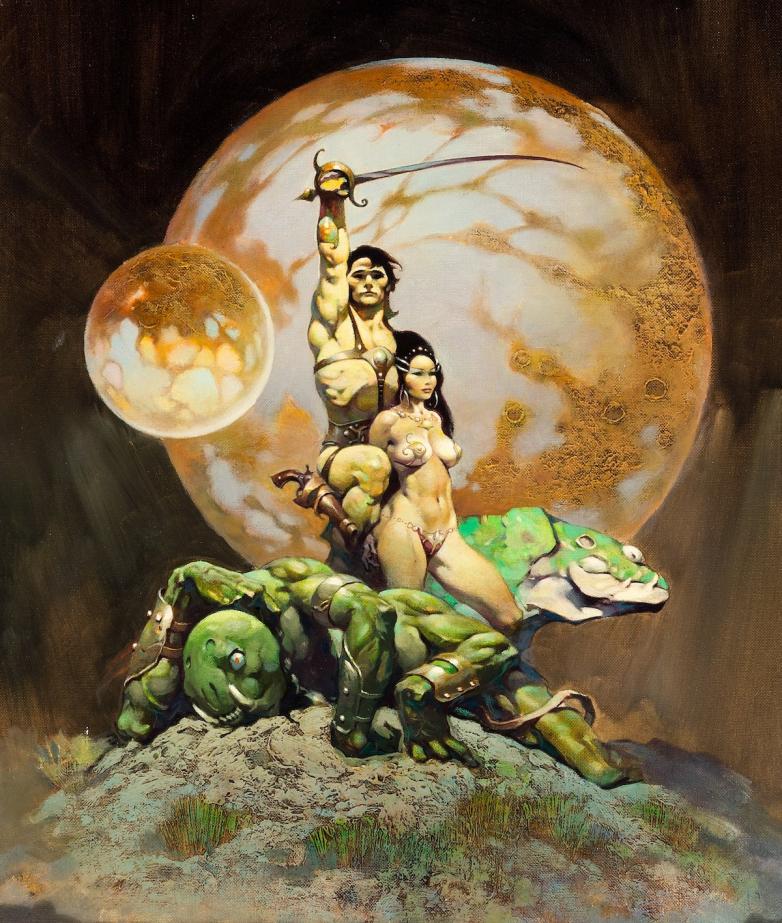 Dallas, TX – In 1970, Frank Frazetta painted two versions of the cover for Edgar Rice Burroughs’ A Princess of Mars.

One he sent to the publishing house Doubleday, whose hardback version of the 1912 story – featuring the debuts of Confederate soldier John Carter and Martian princess Dejah Thoris – has become one of the most recognizable and influential covers in publishing history. And the other Frazetta made for himself immediately upon competition of the assignment. He was deeply proud of the piece and knew its return was unlikely. Better, he thought, to make another than lose this only child.

The paintings that Frazetta titled The Princess of Mars, each featuring John Carter brandishing a sword above his head and Dejah Thoris alongside him, were seemingly identical in almost every way. They look the same at first, second, even third glance. But there are alterations, at once small yet significant: In the version Frazetta kept for himself, “Dejah's stance is more upright, indicating her prowess and confidence and depicting a stronger woman,” notes Nadia Mannarino, Heritage Auctions’ New York City-based Senior Consignment Director for Comics & Comic Art.

“And the breast plate and jewelry in this painting are more ornate,” says Mannarino, who, alongside her husband Joe, began representing Frazetta in the 1980s. “And the moons are much more defined.”

Put plainly, says Heritage Auctions’ Vice President Barry Sandoval. “This is the rare case when the second version is even better than the published one.”

Decades ago, the Mannarinos helped auction off the Doubleday version through Christie’s. But the one he made and kept for himself – truly such a rare and extraordinary thing to do! –  has remained with Frazetta’s family for five decades. It has never before been to market. Not until now.

Frazetta’s personal version of his The Princess of Mars is a centerpiece of Heritage Auctions’ Comics & Comic Art event taking place Sept. 10-13, at Heritage’s world headquarters in Dallas and online at HA.com.

In recent years, Frazetta’s pieces have realized extraordinary sums. Only last year, Heritage Auctions sold his Egyptian Queen, from 1969, for $5.4 million. Others, too, have sold for seven figures, prices befitting the best known, most revered – and most-often imitated -- fantasy and science fiction artist of the 20th century.

The high expectations for Frazetta’s The Princess of Mars are warranted for another reason, too:

This is the piece upon which Tom Jung modeled the first Star Wars poster – the one with Luke Skywalker wielding a lightsaber, Princess Leia at his knee, Darth Vader’s helmet looming behind them like a sunset. The Princess of Mars is the piece upon which countless science fiction and fantasy artists built their careers. Its echo resounds five decades later like a shot just fired.

Frazetta rarely revisited his own work, and on those rare occasions when he did, he would dramatically and drastically revise the piece as not to repeat himself. But just as The Princess of Mars struck a chord with other artists, so, too, did it resonate with its maker.

“Frazetta recounted to us numerous times that he so loved the image and hated the fact that it would remain with the publisher that he executed ‘one for me’ at the same time,” Nadia says. “He also confided to us that he loved this second painting even more.”