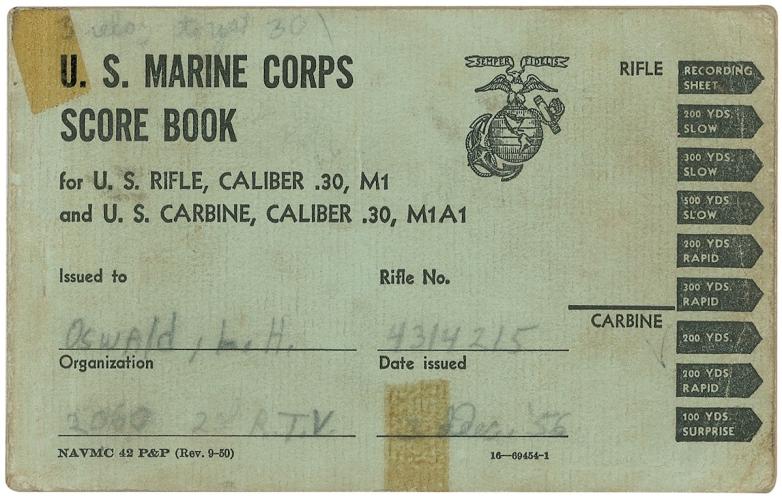 The 80-page softcover workbook issued on December 3, 1956, was filled out by Oswald. The first few pages of the workbook contain instructions for shooting and scoring, with Oswald's pencil notations.

Accompanied by interesting correspondence from 1969 between Marguerite Oswald and Dr. John Lattimer, a notable researcher of the Kennedy assassination, who originally purchased the score book from her; this includes one handwritten letter from Dr. Lattimer to Marguerite Oswald and four letters and envelopes from Marguerite Oswald, the most fascinating being one dated in part: "My late son's Marine score book is in the same condition as when he left it with me…Someday soon, it will be proven that a conspiracy did exist and that my son was indeed the 'patsy.'"

On December 21, 1956, Oswald was tested for marksmanship with his rifle on five different exercises—from 200, 300, and 500 yards firing slowly and from 200 and 300 yards firing rapidly. Based on these results, a Marine would be rated by a defined scoring system: over 190 points was considered a marksman, over 210 was a sharpshooter, and over 220 was considered an expert. Oswald scored 212 and was rated in the middle as a sharpshooter.

"It's an extraordinary piece of history used as a major exhibit of evidence in the Warren Commission conclusions implicating Lee Harvey Oswald to the Kennedy assassination," said Bobby Livingston, Executive VP at RR Auction.

The Fine Autograph and Artifacts from RR Auction, began on October 14 and concluded on November 10. For more information, go to www.rrauction.com.