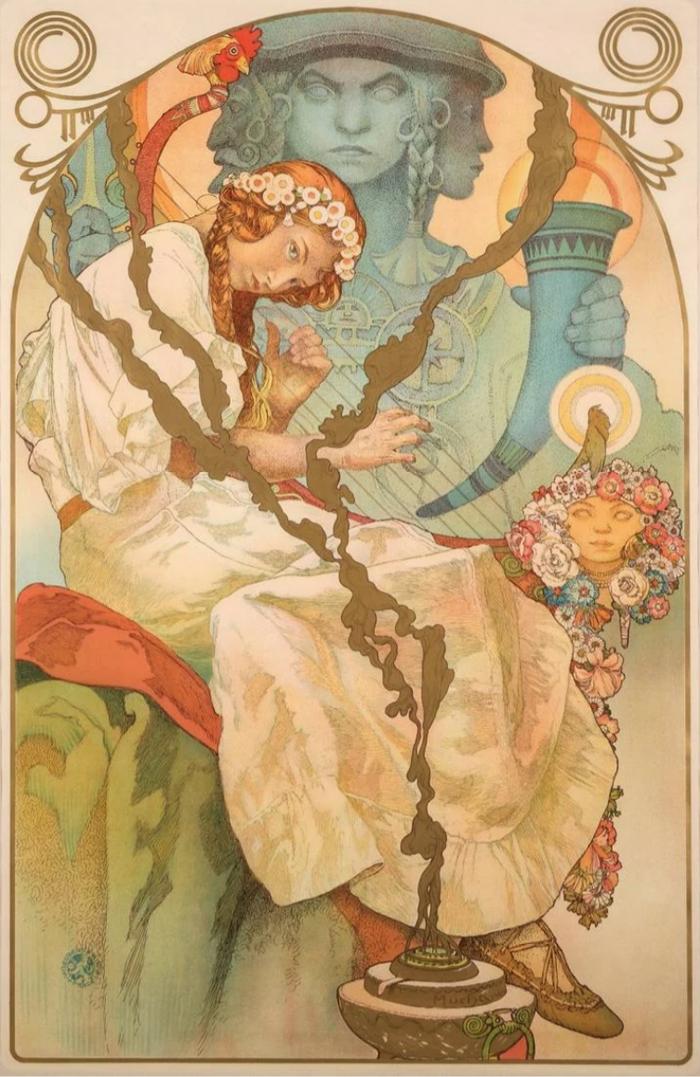 Lone Jack, MO – A collection of superb Alphonse Mucha period graphics from the estate of Hallmark Cards senior master artist Robert Allan Haas (American, 1950-2018) is the centerpiece of Dirk Soulis’ much-anticipated December 7 Winter Fine Art Auction. Approximately 60 of the sale’s 210 lots come from the prestigious Haas collection. Many of the works are quite rare and were exhibited at Hallmark’s headquarters and at eight US galleries as part of a traveling museum exhibition from 1998 through the early 2000s.

It is an important collection, said auctioneer Dirk Soulis, not only because of its inherent quality but also because Haas was an eminent scholar and authority on the subject of Alphonse Mucha (Czech, 1860-1939). “Robert Haas discovered Alphonse Mucha while a student at the Ringling College of Art and Design. Throughout his life as he pursued examples of period art by Mucha, he also maintained a friendly correspondence with Mucha’s family,” Soulis said. “His extensive archive of papers indicates that the Mucha family often sought his opinion on matters of authentication. He was extremely knowledgeable and very highly regarded in art circles.”

Top entries from the Mucha collection include classic, lifesize lithograph posters of famed stage actresses of the turn of the 20th century. One is a dramatic portrayal of Sarah Bernhardt in the Greek tragedy Medee (Medea), staged in 1898 at Le Theatre de la Renaissance in Paris. Estimate: $5,000-$10,000 Another highlight, a Mucha poster printed in the United States in 1908, depicts “the American Sarah Bernhardt,” actress Caroline Dudley, who intentionally used the stage name “Mrs. Leslie Carter” following an acrimonious divorce. The 89½-inch-tall Art Nouveau poster of Carter in the play Kassa is estimated at $10,000-$15,000.

Robert Haas also had an interest in the work of American artist Rose O’Neill (1874-1944) and was even an officer of the International Rose O’Neill Club Foundation. Although O’Neill was best known for the endearing Kewpie characters that brought her fame and fortune, she was also a “serious” artist who mixed fantasy characters with allegorical themes. The Haas collection includes 10 mixed media on paper works by O’Neill that were exhibited in Paris in 1921 and later at the Brandywine River Museum of Art. Her ink and watercolor work Perseus with the Head of Medusa, circa 1900-1920, is estimated at $3,000-$5,000.

The auction is impressive in its breadth, with fine consignments of American, European, Midwest regional paintings, watercolors, pencil-signed prints and bronzes from several Midwestern estates and collections. Of special note is a grouping of Thomas Hart Benton (American, 1889-1975) studies and lithos, as well as works by Benton’s students, which were collected from the 1920s-1960s by a framer/art dealer who knew the Benton family.

Leading the collection of works by Kansas artists is an early oil-on-canvas by Birger Sandzen (Swedish/American, 1871-1954) that brilliantly captures the distinctive purple, rose and earth tones of the Rocky Mountain West. Titled At The Timberline Pike’s Peak Colo, it measures 20¼- by 24¼ inches, is artist-signed at lower left and pencil-signed and dated on verso. Estimate: $30,000-$50,000. “We see Sandzen paintings from the 1940s and ’50s with some frequency, but this particular one is from 1925 and is a Rocky Mountain landscape,” said Soulis. “In addition, it has an excellent line of provenance. It was acquired directly from the artist by a student of Sandzen’s, then passed by descent through a couple of generations of her family. With all these points considered, it checks off a couple more boxes than usual and makes the painting even more appealing to Sandzen collectors.” The Sandzen offering also includes linocuts, drypoints and block prints.

There are several fine examples of art with a Native American theme. A signed William Standing (Native American, 1904-1951) oil-on-board depiction of a brave on horseback, 11½ x 14½ in (sight), is estimated $3,000-$4,000; while the highest-estimated of four Taos school oil paintings by Fern Knecht, the vibrant Portrait of Toulepela (Swift Lightning), is expected to reach $3,000-$5,000.