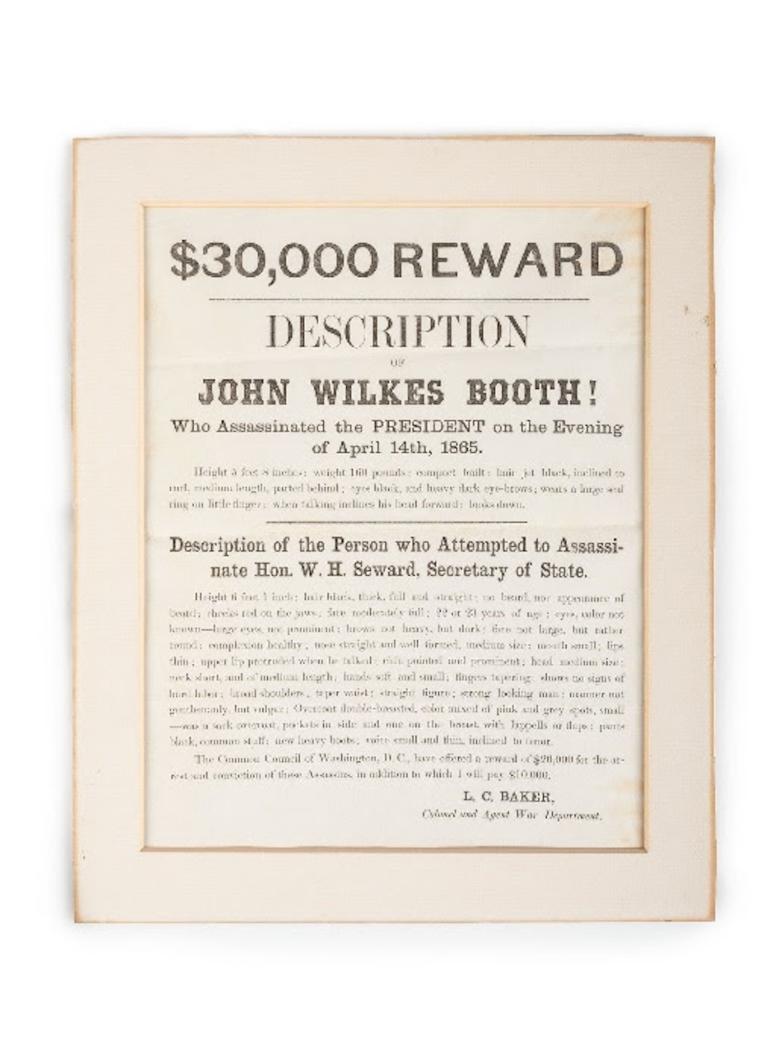 Cincinnati – A collection of Civil War-era broadsides and ephemera from respected collector James Milgram, M.D., sent Hindman’s American Historical Ephemera & Photography auction well past its presale estimate to a $793,755 total across the two days of the sale. Held November 3 and 4, the auction featured over 630 lots spanning the breadth of American history from the earliest days of European colonization to the modern day.

Dr. James W. Milgram is well known in the American Historical Ephemera category having authored over 650 articles and eight books while remaining an active collector and senior member of the prestigious Collectors Club of Chicago. The collection offered in the November sale was comprised of an important assemblage of printed ephemera, including many broadsides, posters, and sale-bills that miraculously stood the test of time.

Civil War-era broadsides from the collection in particular were in high demand during the auction, led by the earliest and rarest reward broadside for John Wilkes Booth (lot 455), which beat its presale estimate selling for $31,250. Issued by Colonel Lafayette C. Baker, this is the first handbill regarding Booth in the immediate aftermath of the Lincoln assassination, offering a $30,000 reward for his capture and providing a detailed description of the actor turned assassin. Very shortly after the issuing of the handbill, the reward was increased to $100,000 before again being raised several times until Booth’s eventual capture, making this one of the few surviving documents with the original reward value.

In the textile category, a trio of 19th century United States flags sold well above their estimates. Although the red and white stripes of the flag have remained consistent since its original design, the alignment of the stars was not formalized until 1912, which resulted in a variety of unique, creative designs like those offered in the auction. The top lot of the group was an 1850s flag commemorating the admission of California into the union with a large star in the middle surrounded by a field of 30 stars (lot 159). This rarely encountered flag sold for $18,750. Also reaching five figures was a 35-star “Great Star” pattern Civil War-era flag that sold for $17,500 (lot 160) and a centennial parade flag that sold for $16,875 (lot 162).
Other highlights from the auction include an autograph album from the 1860-70s (lot 312) that featured more than 140 signatures from luminaries of the time including Abraham Lincoln and Frederick Douglass that sold for $20,000; an archive assembled by Phillippe d’Orleans, Count of Paris, while writing his 1874 book History of the Civil War in America, which sold for $18,750 (lot 102); and a half plate copy daguerreotype portrait of Zachary Taylor that sold for $13,750 (lot 220).