Iconic Chamber of Chills No. 19 Art Heads to Auction For First Time 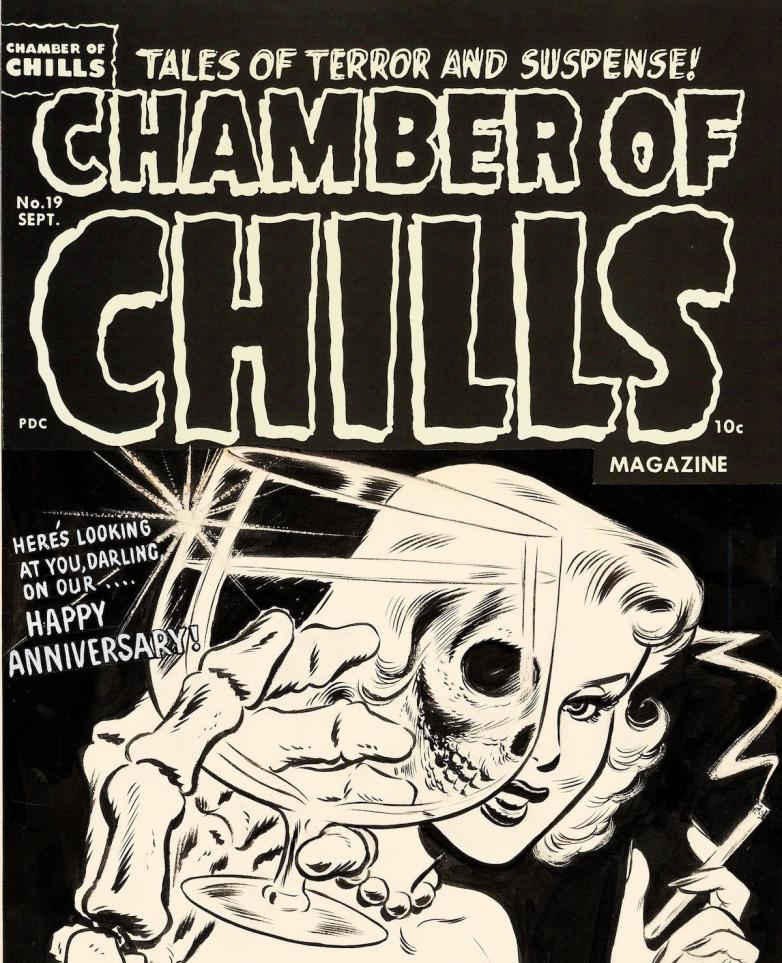 Dallas, TX – Sixteen years ago, Heritage Auctions sold a highly graded copy of Chamber of Chills No. 19 for $126.50 – in retrospect, an outright steal. In July of this year, the very same title, bearing a far lesser grade, realized $6,070.80 during Heritage’s summer Comics & Comics Art event. And in 2018, a far better copy of the 1953 book sold for almost twice that amount.

As prices escalated over the years, and with Chamber of Chills No. 19 threatening to overtake far more famous and familiar horror titles, collectors and prospectors flocked to the message boards. They debated, often at great length, what accounts for the marked increase in price and interest in this once-obscure issue published by Harvey, best known for its children’s comics such as Richie Rich and Little Dot.

And time and again, the answer has remained the same: That issue is so highly sought-after because of its cover by Lee Elias, the Englishman revered for his long-running work on Harvey’s Black Cat title and for co-creating the villain Eclipso during his stint at DC Comics in the 1960s.

A skeletal arm, clad in a tuxedo, raises a full snifter to toast a smiling blond-haired woman festooned in blood-red – bustier, necklace, lipstick. The cover’s text reveals the reason for the celebration: “Here’s looking at you darling on our … HAPPY ANNIVERSARY!” The woman holds a smoldering cigarette in her left hand. She smiles. And through the glass, it’s revealed that she, too, is dead. If not now, then soon.

The cover, which punk-rocker-turned-heavy-metal-man Glenn Danzig famously used as the artwork adorning the Misfits’ 1984 single “Die, Die My Darling,” has remained for decades tucked in a private collection. Only now is it finally coming to market for the first time:

Elias’ original cover art for Chamber of Chills No. 19 is one of the premier offerings found in Heritage Auctions’ Comics & Comic Art event taking place Sept. 10-13 at Heritage’s world headquarters in Dallas and online at HA.com.

“Believe it or not, the same company that introduced Richie Rich in September 1953 published this the same month, and other horror comics, too,” says Heritage Auctions’ Vice President Barry Sandoval. “Some other horror covers are pretty brutal. But this one seemed to really speak to the time, to 1950s America. Everything was ‘perfect,’ and here’s this seedy image, this evil lurking just beneath the surface.”

Yet soon enough, covers like this one – terrifying, tantalizing, titillating – would vanish from the racks and newsstands thanks to Fredric Wertham, whose book Seduction of the Innocent, published only a year later, warned that comics were rotting the minds and morality of American youth. Senate hearings on the subject, and some cities’ bans on horror and crime comics, spooked the comics industry into self-censoring itself; thus, the creation of the Comics Code Authority, whose seal of approval meant the neutering of comics for decades to come.

Chamber of Chills No. 19 would stand among the last of its kind.

Its origin story actually pre-dated Elias’ involvement: The preliminary and concept sketches for Chamber of Chills No. 19’s cover were actually done in pencil by Harvey’s chief artist (and Richie Rich co-creator!) Warren Kremer, then turned over to Elias. The U.K.-born Elias brought life – and death – to the final work.

A decade ago Heritage Auctions sold Kremer’s sketches for $2,151.

With weeks to go before the Sept. 10-13 Comics & Comic Art event, Elias’ fully fleshed out original has already raced passed the $50,000 mark.

So, yes. To answer that question about what makes this comic so coveted: It’s the cover.