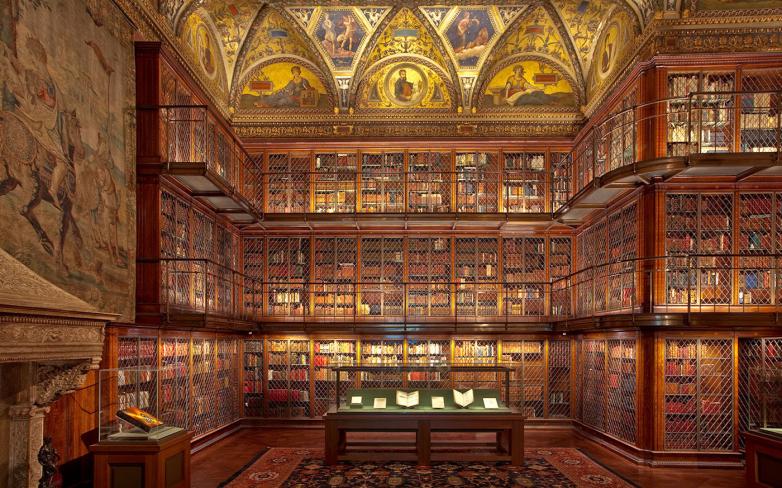 New York – The Morgan Library & Museum presents J. Pierpont Morgan’s Library: Building the Bookman’s Paradise, on view June 10 through September 18, 2022. This exhibition traces the design, construction, and early life of one of the finest examples of Neoclassical architecture in the United States through works such as rarely seen architectural drawings, period photographs, and a selection of the most significant rare books and manuscripts from Morgan’s collection. It honors the architects, designers, tradespeople, artists, and builders who created the Library more than a century ago and celebrates the completion of the current campaign of exterior restoration and enhancement of this landmark building, which anchors the campus of the Morgan Library & Museum.

In 1902, the American financier and collector J. Pierpont Morgan (1837–1913) commissioned architect Charles Follen McKim (1847–1909), of the firm McKim, Mead & White, to design a freestanding library next to his home on East 36th Street in New York. For the next four years, hundreds of people worked to fulfill Morgan’s commission and realize McKim’s design, from the quarriers who extracted the stone in east Tennessee to the masons who set the marble blocks with exquisite precision. The works in this exhibition document the choices made as plans for the building were developed. We discover some of the many artisans who contributed to the building’s construction and ornamentation as the exhibition traces the design development of the pristine exterior and colorful interior of the Library. In addition, we meet Morgan’s bibliophile nephew, Junius S. Morgan II (1867–1932), a banker and honorary associate librarian at Princeton University who advised his uncle in the early stages of the building project; and Belle da Costa Greene (1879–1950), the cataloger from Princeton who became J. Pierpont Morgan’s librarian in 1905 and managed the new building (and the treasures within) as construction was in the final stages.

J. Pierpont Morgan’s Library: Building the Bookman’s Paradise features several works from Morgan’s growing collection of books and illuminated manuscripts that inspired the Library’s creation. One book that Morgan simply had to have as he began to direct significant attention and resources to his library during the 1890s was a copy of Johann Gutenberg and Johann Fust’s Bible, a pivotal publication that represented the technological breakthrough of movable type in Western Europe. Morgan acquired his first copy of the Gutenberg Bible, printed on vellum, in 1896 from the London firm Henry Sotheran & Co. for £2,750. He would soon acquire two more, both printed on paper: a copy of the Old Testament (purchased with the Theodore Irwin collection in 1900) and a complete copy in two volumes (purchased in 1911 from the London dealer Bernard Quaritch).

Also on display is the Golden Gospels of Henry VIII. This thousand-year-old manuscript was created by some sixteen scribes in a Benedictine abbey in Trier (in what is now Germany). They used gold ink to copy the text of the Gospels onto parchment that had been dyed with a plant-based purple pigment, creating a luxurious object that was likely an imperial gift. Though it was made in the tenth century, the manuscript has come to be known as the Golden Gospels of Henry VIII because the English monarch owned it some five centuries later. Morgan acquired it in 1900 as part of an en bloc purchase of more than three thousand books and manuscripts from the American manufacturer and financier Theodore Irwin.

Having acquired these precious volumes and many more (including literary manuscripts by such authors as Sir Walter Scott and George Sand, also on view in the exhibition), Morgan chose to commission an extravagant private Library to house his growing collection. The result is an architectural showplace, the creation of which is chronicled through early sketches and architectural plans. Among these is an early proposal by the architect Whitney Warren (1864–1943), who had designed a new building for the New York Yacht Club that opened in 1901. For Morgan, Warren proposed an ornate Beaux-Arts-inspired “Library-Museum,” with its entrance flanked by figures representing art and wisdom, and water gushing from open-mouthed lions at the pedestals’ feet. Morgan rejected Warren’s concept and instead approached Charles Follen McKim to design his Library.

A plaster maquette of the Library’s facade, commissioned by McKim, Mead & White during the design process, is on view in Building the Bookman’s Paradise. After Morgan engaged the firm in 1902, lead architect Charles Follen McKim developed several proposals—including one with a cupola—before arriving at the plan embodied in this maquette. The model differs only in modest respects from the completed building. The two arched niches would remain empty, however, as no sculptures were ever installed; and notably missing from the model are the marble lionesses that Edward Clark Potter would sculpt to flank the entry. The development of the lionesses and other elements of the exterior and interior decoration are chronicled in the exhibition through correspondence, plans and elevations, and early photographs.

Morgan commissioned his opulent Library in an era of extreme wealth and income inequality, as the so-called Gilded Age gave way to the Progressive Era. The exhibition also reveals how labor strikes in the building trades brought construction to a halt in 1903, and how the complex stone setting method stipulated by the architects nearly drove the lead building contractor, Robert C. Fisher & Co., into bankruptcy. All the known builders, contractors, artists, and architects who contributed to the creation of the Library are named and honored at the entrance to the exhibition gallery.

The exhibition closes by introducing the woman who would become the first Director of what is now the Morgan Library & Museum, transforming a “bookman’s paradise” from a private enclave into a leading cultural institution. Belle da Costa Greene (named Belle Marion Greener at birth) grew up in a predominantly African American community in Washington, D.C. Her father, Richard T. Greener, was the first Black graduate of Harvard College and a prominent educator and racial justice activist. After Belle’s parents separated, her mother, Genevieve Ida Fleet Greener, changed her surname and that of the children to Greene. While Belle was in her teens,

Genevieve and the children began passing as White. Morgan had known Greene’s father when both served as officers of the Grant Monument Association during the 1880s. It is likely, but not certain, that Morgan ultimately learned that his former colleague and his librarian were father and daughter. The exhibition concludes with a note from Greene accompanying the book that was dearest to Morgan: a small, well-worn Book of Common Prayer that he always carried with him.

The Morgan’s Director, Colin B. Bailey, said, “The historic Library is the heart of the Morgan and a link to its patron and his family, as well as to the architects, builders, and artisans who created this remarkable structure. Today we value the building not only as a memorial to J. Pierpont Morgan, but as also as a dynamic home for the collection and a site for exploration and discovery. We are delighted to open this exhibition, which sheds new light on the building’s history, in conjunction with the unveiling of its exterior restoration and the Morgan Garden.”

The exhibition’s title derives from the first published account of the Library’s lavish interiors, published anonymously in the London Times and concurrently in the New York Times in 1908. “The Bookman’s Paradise exists,” the writer announced, “and I have seen it. ... I have entered the most carefully, jealously guarded treasure-house in the world, and nothing in it has been hidden from me.” Today, the “bookman’s paradise” belongs to all of us.

Building the Bookman’s Paradise was curated by Christine Nelson, longtime Drue Heinz Curator of Literary and Historical Manuscripts at the Morgan and, since fall 2021, head of the research fellowships program at The Library Company of Philadelphia. The coordinating curator at the Morgan is Jennifer Tonkovich, the Eugene and Clare Thaw Curator of Drawings and Prints and author of the series Inside the Morgan, which explores the interiors of J. Pierpont Morgan’s Library.

A publication chronicling the design and construction of J. Pierpont Morgan’s Library, the restoration of its exterior, and the creation of a new garden surrounding it, will appear in October 2022 with Scala Publishers. The volume features an essay drawing on new sources to shed light on Morgan’s passion for collecting books and manscripts which resulted in his commissioning a Library designed by Charles Follen McKim (by Colin B. Bailey and Daria Rose Foner); the first in-depth account of the team of artisans who built the building (by Christine Nelson); an exploration of the relationship between McKim and Morgan and the architectural context of the Library (by Barry Bergdoll); a sweeping account of the surrounding Murray Hill neighborhood (by Andrew Dolkhart); and a detailed record of the Library’s restoration and garden (by Brian Regan). J. Pierpont Morgan’s Library: Building the Bookman’s Paradise will appeal to those interested in book history and connoisseurship, architectural history, preservation, and urban history. An array of engaging public programs will accompany the exhibition. Please visit themorgan.org for further details.