Signer’s Copy of the Declaration of Independence Found in Scotland Sells for $4.4 Million 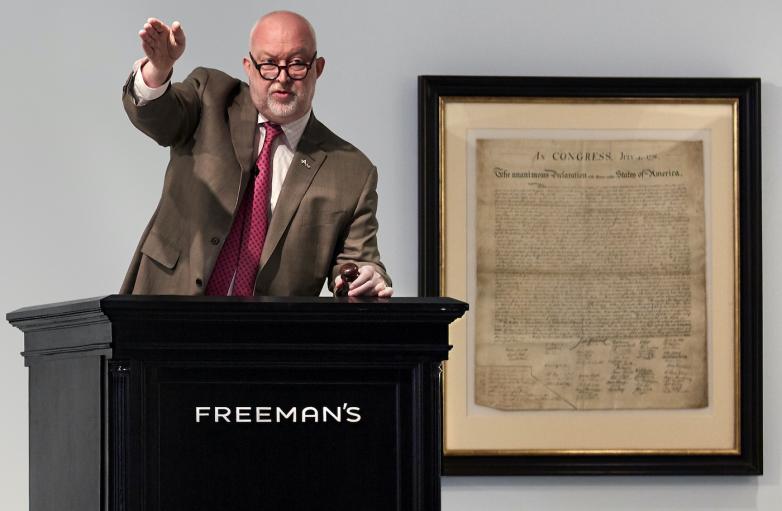 Freeman's secured a new world auction record for a Stone printing of the Declaration of Independence.

In an achievement befitting Philadelphia’s auction house, this historic sale was held in the nation’s birthplace just days before Independence Day, 245 years after the original Declaration of Independence was signed. “I couldn’t be happier for the consignors, the new owner, and Freeman’s,” says Darren Winston, Head of Freeman’s Books and Manuscripts department. “From its fairytale-like discovery through to today’s record-breaking auction, it has been both incredibly exciting and a true privilege to be involved with the sale of this significant piece of American history.”

This rare signer’s copy of William J. Stone’s 1823 printing of the Declaration of Independence was, remarkably, rediscovered in Scotland by Freeman’s sister auction house, Lyon & Turnbull. It was first presented to Charles Carroll of Carrollton (1737-1832), the last surviving signer of the original document, and later inscribed by his grandson-in-law John MacTavish (1787-1852). Commissioned by then-Secretary of State John Quincy Adams in 1820, Stone’s copperplate engraving on vellum is considered the most accurate representation of the original 1776 document.

Seth Kaller, expert in American historic documents and artifacts, says, “We all know the theory that great items find their market, but often that isn’t true with so many things—business, personal, political—competing for everyone’s attention. This clearly broke through; it had the greatest depth of bidders I’ve ever seen for a seven-figure document.”

The document will be on temporary loan to the National Park Service for display at Philadelphia’s Second Bank of the United States for the July 4 holiday.