Books About Books: Expanded Holiday Edition of the Editor’s Shelf 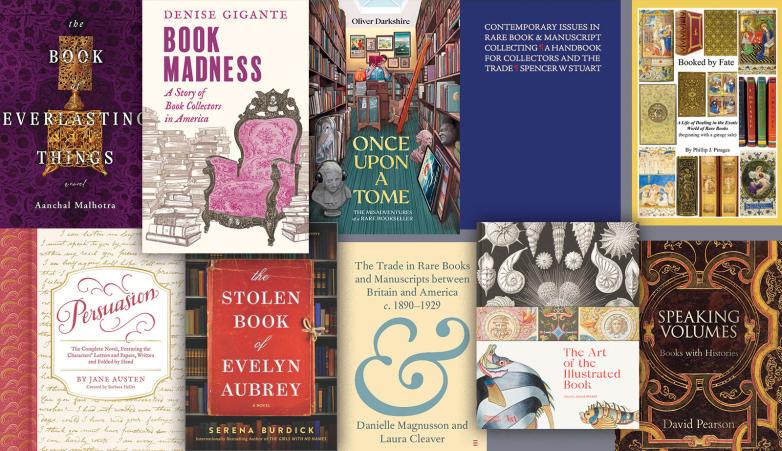 In our current issue, five new books about books appear on the Editor’s Shelf. Since we went to print, five more have come to our attention. It’s a busy season for bibliophiles!

Some of the titles have already been covered online in brief reviews or interviews (linked below), some we are currently reading, and some have just been received and are therefore on our holiday break reading list. But we wanted to spread the word in case any catch your eye as possible additions to your holiday shopping list.

Once Upon a Tome: The Misadventures of a Rare Bookseller is an uproariously funny account of day-to-day life at the London booksellers Sotheran’s, written by Bright Young Bookseller Oliver Darkshire.

Another bookseller’s memoir, Booked by Fate: or, a Life’s Adventures in the Exotic World of Rare Books (Beginning with a Garage Sale) by Phil Pirages of Pirages Fine Books & Manuscripts, covers four decades of bookselling. It has been called “a master class for dealers.”

Julius Bryant’s The Art of the Illustrated Book is a beautiful volume that showcases the finest illustrated books in history via the outstanding collections of the National Art Library at the Victoria and Albert Museum in London.

Speaking Volumes: Books with Histories by the renowned book historian David Pearson delves into the role of the reader and their relationship with books, making it an an excellent addition to any bibliophile’s shelf.

Denise Gigante’s welcome new book, Book Madness: A Story of Book Collectors in America, chronicles the sale of Charles Lamb’s library in 1848 and how it transformed the world of the collecting.

The Trade in Rare Books and Manuscripts between Britain and America, c. 1890-1929 by Danielle Magnusson and Laura Cleaver is a short but powerful look at the ‘Golden Age’ of book collecting.

The Stolen Book of Evelyn Aubrey by Serena Burdick is a page-turner with a literary mystery at its core. The lively narrative toggles between California in 2006 and England in 1898.

Aanchal Malhotra’s The Book of Everlasting Things is a meditative tome about a Hindu perfumer and a Muslim calligrapher whose love is forbidden when their homeland is partitioned during the struggle for Indian independence at mid-century.

A deluxe edition of Jane Austen’s Persuasion contains recreations of manuscript letters and other pieces of print ephemera — we spoke to curator Barbara Heller about the process and the final product, Persuasion: The Complete Novel, Featuring the Characters' Letters and Papers, Written and Folded by Hand.