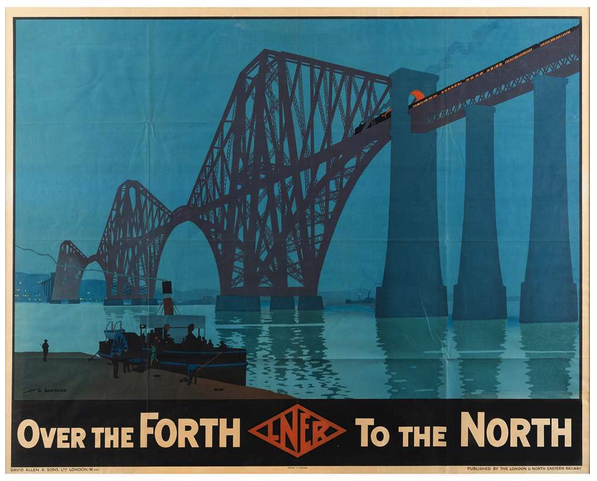 1928 poster of the Forth Bridge by Henry George Gawthorn, offered at Lyon & Turnbull this week.

A 160-lot Christie's online sale of Science and Natural History ends on Tuesday, October 25. A four-rotor Enigma cipher machine in working condition, one of the first manufactured for the German navy in late 1941, is expected to lead the sale at £300,000–500,000. It is believed to have been used in an onshore facility and was captured by the Norwegian military at the end of World War II and used by their navy until 1957. A print of the first selfie in space, taken by Buzz Aldrin during the Gemini XII mission in November 1966, is estimated at £3,000–5,000. The same range has been assigned to Johannes Honter's c.1532–1551 star charts, the first printed charts to show the constellations as viewed from Earth.

At Bonhams New York on Tuesday, Exploration and Travel Literature, Featuring Americana, in 105 lots. A 1770 manuscript map of coastal California by Miguel de Costansó, known as the first to feature San Francisco Bay, rates the top estimate at $600,000–800,000. A manuscript copy of the subpoena to sitting president Thomas Jefferson during the treason trial of Aaron Burr in 1807, this the one sent to Secretary of War Henry Dearborn, is estimated at $200,000–300,000. A broadside copy of the first American copyright law, signed by Thomas Jefferson as Secretary of State in 1790, is expected to sell for $100,000–150,000. A previously unknown April 29, 1847 Frederick Douglass letter to an unidentified "beloved Sarah" about his return to America aboard the Cambria has been estimated at $50,000–70,000.

On Tuesday afternoon at Bonhams New York, History of Science and Technology, including Space History. The 177 lots include a two-leaf Johannes Kepler manuscript containing logarithmic calculations on the movements of the planets, which is expected to lead the sale at $400,000–600,000. A late 1987 Macintosh SE computer used by Steve Jobs during the years of NeXT and given by Jobs to the present owner in 1994 is expected to sell for $200,000–300,000. An autograph leaf from Darwin's Descent of Man, signed by Darwin later as a presentation inscription has been assigned the same estimate.

On Thursday, October 27 at Lyon & Turnbull, 51 lots of Travel & Vintage Posters. Rating the top estimate there is Henry George Gawthorn's 1928 poster Over the Forth to the North, featuring the iconic Forth Bridge.