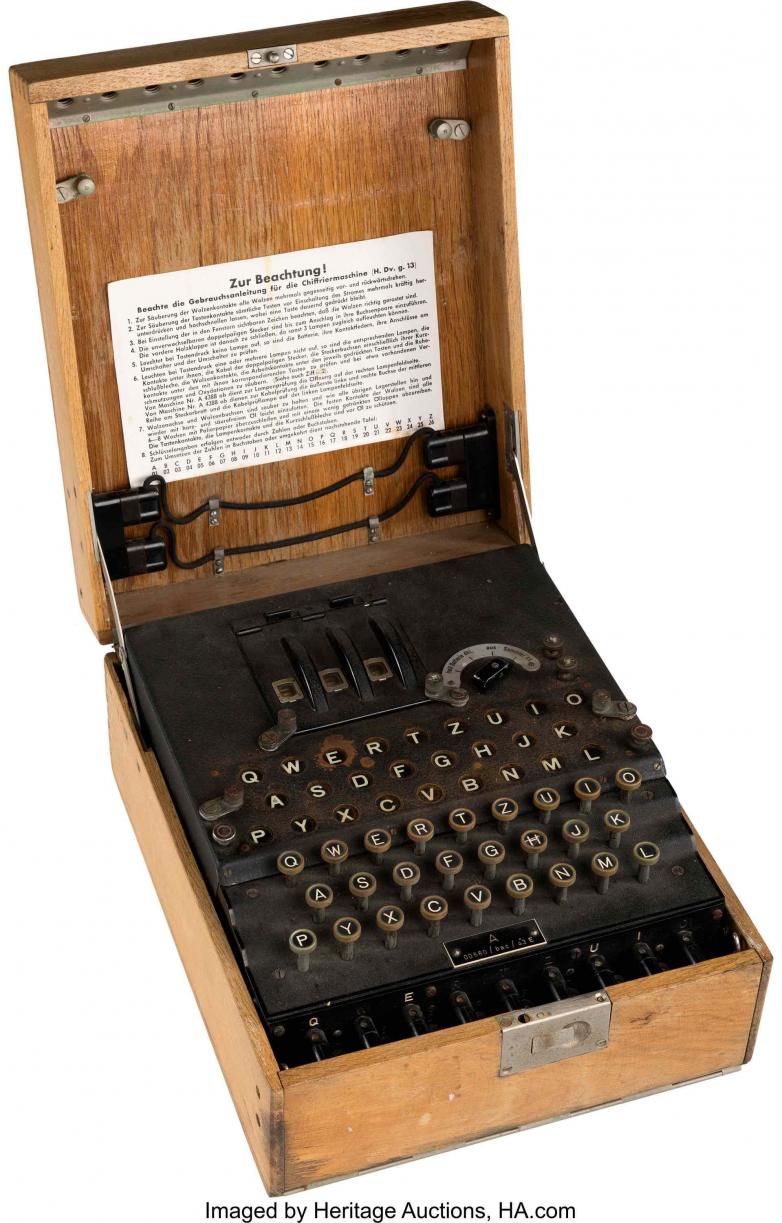 Dallas, TX – A rare encryption machine used by Nazi German forces to communicate without interception and translation by opposing nations sold for more than four times its opening bid to end at $106,250. The cypher device was offered at a public auction of historic WWII artifacts in Heritage Auctions’ Historic Flags of World War II Auction Dec. 14.

The “Enigma” Encrypting Machine Used by the German Military in WWII was used from 1934 until the end of the war, but fewer than 250 are believed to remain in existence; many were destroyed by the Germans to prevent them from falling into the wrong hands, Winston Churchill ordered all others to be destroyed after the war, and many were lost at sea.

“Enigma machines were critical tools for the Germans, and were believed to have provided an essentially ‘unbreakable’ code through which German forces could communicate,” Heritage Auctions Americana Director Tom Slater said. “Not only are they historically very significant, but the fact that both the Nazis and Churchill wanted them destroyed makes the remaining examples like this one very hard to come by, and drives the massive demand.”

The machines went through evolution of several designs in an effort to stay ahead of code-cracking attempts. The three-ciphor rotor design, referred to as “M3,” was thought to have only one flaw beyond human error: the fact that the machine could scramble the letters into any of 17,576 combinations except the use of the original letter. But it was human error, including but not limited to the fact that many users of the machine signed off at the end of their communications with “Heil Hitler,” a pattern that eventually became a step in the Allies’ process of breaking the coded communications.

The machine offered here is a model M3 with the serial numbers of the rotors matching the machine itself, a pairing that did not always happen because of the interchangeability of the rotors. The metal wheels are engraved with the Third Reich emblem: a black eagle over a swastika.

The interior of the wooden lid includes operating directions in German, above the QWERTZUIO mechanical keyboard, which would light up when the machine was used. The socket locations are marked "Kabelprufung" (cable test) and "Lampenprufung" (lamp test).