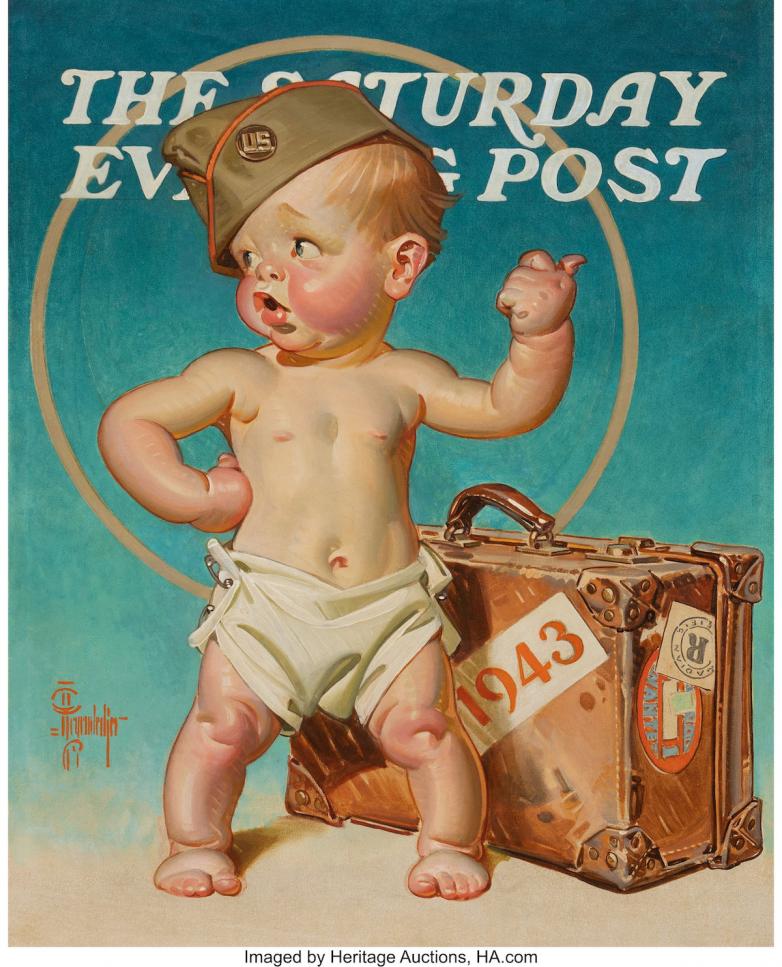 Dallas – It was meant to be Joseph Christian Leyendecker’s final cover for The Saturday Evening Post – the illustrator’s iconic New Year’s Baby, dressed only in a diaper and a soldier’s garrison cap, thumbing his way to the front as World War II raged on. But the 1943 painting never made its way to the magazine – or to the public’s view.

Not until Heritage Auctions’ American Art event on Wednesday.

The entirety of the sale realized more than $6 million. And the fact that New Year's Baby Hitching to War sold for $275,000 – or more than 4.5 times its pre-auction estimate – should not surprise; nor that it merited a spirited round of bidding from clients online and over the phone; nor that this was the fifth-highest price paid for a J.C. Leyendecker work. After all, it was done by the hand of the man whose red, rotund Santa Claus became one of the 20th century’s most enduring images.

Wilkinson was long ago gifted the piece by the family of E. Huber Ulrich, chairman and CEO of Curtis Publishing Co., The Saturday Evening Post’s parent. He had the family’s blessing to sell New Year's Baby Hitching to War, which the Post had rejected in 1943 because editors feared it would break the heart of mothers sending their sons off to war.

On Wednesday, Wilkinson and Ulrich’s granddaughter Linda gathered around the computer to watch the online auction.

And, he said, “that was extremely exciting,” especially as bidders fought over Leyendecker’s work, driving it from an opening bid of $82,500 to its final sale price of more than a quarter of a million dollars. “We never thought it would go that high.”

When it sold, Wilkinson said, Linda began to cry.

“She has just lost her mother a month or so ago,” he said. “She remembered it hanging in the house,” as though it were a member of the family.

Which is why, in the end, Wilkinson did not believe he could pocket the sale’s proceeds.

The morning after the sale, Wilkinson did the extraordinary: He emailed Heritage and said, “I want the majority to go back to the family.”

Which is precisely what will happen.

Said Wilkinson, “This is truly an experience I’ll never forget.”