Earliest French Printed Bible to be Auctioned at Christie’s 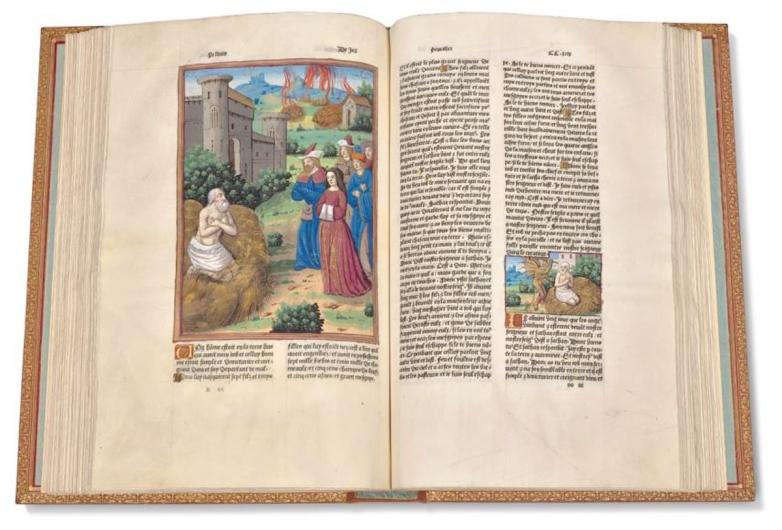 London — Christie’s Valuable Books and Manuscripts auction on 13 July is the most valuable various owner sale for the category to date, led by three extraordinary works: the Longleat copy of a 1499 Bible historiée on vellum, the first complete printed Bible in French; a deluxe copy of Thomas Aquinas’s Summa, a foundation work of philosophy, theology and economics; and a presentation copy of Newton’s Opticks, which revolutionised human understanding of light and colour (£400,000-600,000). The works will be on public display at Christie’s London from 9 to 12 July, as part of Christie’s Classic Week.

Highlighting the sale is a first edition of a complete French version of the Bible (estimate: £600,000-900,0000), dating to 1499, printed on vellum, and extensively decorated and illuminated. The Bible historiée began as an adaptation and translation into French by Guyart des Moulins in the 13th century of Petrus Comestor's 12th century Historia scholastica. This was continued through the 14th and 15th centuries until the Bible historiée became a full French version of the Bible. It is here printed for the first time, edited by Jean de Rély, confessor to Charles VIII to whom this first edition is dedicated. The present Longleat copy is the most complete of four known copies on vellum, and is the only one remaining in private ownership. The three institutional copies are the Pierpont Morgan Library in New York, Bibliothèque municipal in Lyon and Bibliothèque nationale in Paris.

A further highlight of the sale is a deluxe vellum copy of Thomas Aquinas's Summa, secunda secundae (estimate: £400,000-600,000). Not only is the Summa considered one of the greatest works of philosophy and theology ever written, but in its exposition on ethics and morality, the Secunda secundae is recognised as one of the earliest works of economic thought. In it Aquinas considers the theory of private property, of a just price and usury. Influenced by Aristotle, Aquinas distinguished between just price and market price, condemned usury, and argued that the ownership of private property could and should benefit the most people.

Important science is at the heart of the sale with two first editions of Newton’s most revered works. A first edition, first issue, of Newton’s revolutionary work Opticks (estimate: £400,000-600,000), a treatise on light and colour, the book includes his work on the spectrum of sunlight, refraction of different colours, the colour circle, the rainbow, ‘Newton's rings’, and his invention of the reflecting telescope. This work is a presentation copy for Newton’s close friend and disciple, the Swiss mathematician and natural philosopher Nicolas Fatio de Duiller, with only six presentation copies of the Opticks known to exist.

A first edition of Newton’s Principia (estimate: £350,000-500,000) will also be offered. The Principia explains the universal physical laws of gravitation and motion which lie behind phenomena described by Newton's predecessors Copernicus, Galileo and Kepler. For the first time a single mathematical law could explain the motion of objects on earth as well as the phenomena of the heavens. Newton’s scientific views were not seriously challenged until Einstein's theory of relativity and Planck's quantum theory, but his principles and methods remain essential for the solution of many scientific questions.

Also presented is a rare and important autograph manuscript in Newton’s hand (estimate: £60,000-90,000), which offers a unique glimpse into the ancestry of one the foremost influences in the field of mathematics and science, and childhood memories of his grandmother at Woolsthorpe Manor.

A 15th century manuscript of Fibonacci’s Liber Abaci, a rare testament to the foundations of modern mathematics and algebra which introduced the Hindu-Arabic numbering system to the West (£300,000-500,000) will be offered. The manuscript was owned and bound by the one of the most important figures in the history of 19th century mathematics, Prince Baldassare Boncompagni.

The sale also includes 50 medieval and Renaissance manuscripts, covering humanist texts, Books of Hours and alchemical treatises, led by a Parisian Bible once owned by John, Lord Lumley and William Cecil, chief advisor of Elizabeth I (estimate: £80,000-120,000). A  sketchleaf from Mahler’s 9th Symphony, manuscripts and relics from the heroic age of Antarctic Exploration, and a charming group of drawings by Quentin Blake sold to benefit Comic Relief will also be offered.