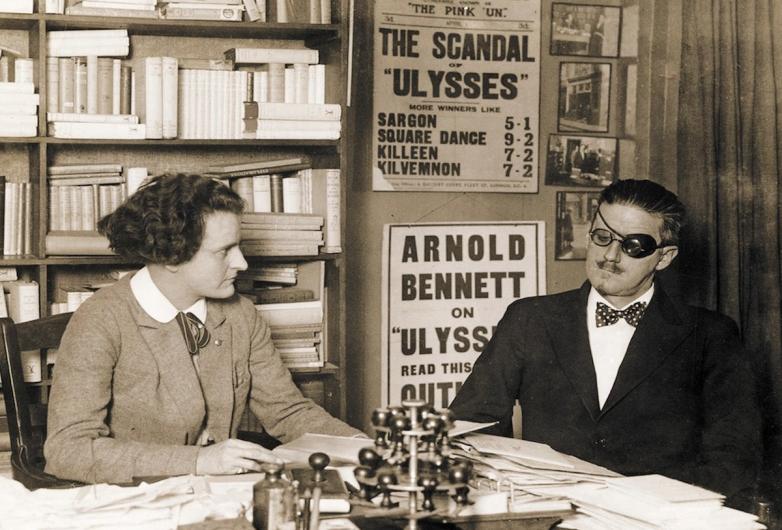 Courtesy of the Ransom Center

Austin, TX — To mark the 100th anniversary of the publication of James Joyce’s landmark work of literary modernism, “Ulysses,” The University of Texas at Austin’s Harry Ransom Center will offer a virtual program on its new Joyce exhibition on Feb. 2—100 years to the day after “Ulysses” was published on Joyce’s 40th birthday in 1922.

The virtual event will be followed by an exhibition, “Women and the Making of Joyce’s Ulysses,” opening March 3 and showcasing more than 150 archival objects that bring to life the largely unacknowledged role of women in the realization of Joyce’s famed masterpiece.

“While writing may be a solitary activity, publishing is not, and the James Joyce collection at the Harry Ransom Center makes visible a circle of remarkable women who became important agents in the making of ‘Ulysses,’” said Ransom Center Director Stephen Enniss. “To commemorate the 100th anniversary of the publication of that landmark work of literary modernism, we are placed to organize and share ‘Women and the Making of Joyce’s Ulysses,’ an exhibition that tells a story of loyalty, patronage and selfless advocacy.”

Widely considered to be the most important book of the 20th century, “Ulysses” was published by Sylvia Beach, owner of the Shakespeare and Company bookstore, in Paris on Feb. 2, 1922. The novel chronicles an ordinary day in the life of the character Leopold Bloom in Dublin on June 16, 1904. Popularizing stream-of-consciousness in modern fiction, the book was a major influence on later 20th-century writing.

While Joyce is known primarily for this pioneering modernist novel, other notable works were published, including “A Portrait of the Artist as a Young Man,” “Finnegan’s Wake” and the collection of short stories “Dubliners.”

The exhibition “Women and the Making of Joyce’s Ulysses” investigates the important and largely unacknowledged role of women in the realization of Joyce’s famed masterpiece, revealing the silent, behind-the-scenes labor of three gay American women, Margaret Anderson, Sylvia Beach and Jane Heap, as well as that of British publisher Harriet Shaw Weaver and various Joyce family members. Objects are drawn primarily from manuscripts, photographs and letters in the Center’s James Joyce collection.

“The Ransom Center holds many remarkable objects that help to tell this story,” said Clare Hutton, exhibition curator and Reader in English and Digital Humanities at Loughborough University. “The exhibition will reveal a more social story of how “Ulysses” came into being and unpack an image and myth that Joyce cultivated quite strongly—that of lone genius struggling with a public and publishers who failed to recognize his genius and wished to thwart and silence his literary efforts.”

In her book, “Serial Encounters: Ulysses and The Little Review” (Oxford University Press, 2019), Hutton examines the significance of the way in which Joyce’s evolving work was first serialized in the New York-based publication The Little Review. She explores the initial reception of Joyce’s iconic work and argues that the circumstances in which the work was first written and read shaped the final product.

In the United States, Joyce’s novel was a source of controversy and the subject of an obscenity trial in 1921. Anderson and Heap’s serial publication of “Ulysses” in their magazine between March 1918 and December 1920 led to seizure of the edition by the New York Society for the Suppression of Vice. This led to legal proceedings and the obscenity conviction handed down before Joyce had even completed the work.

In the United Kingdom, Weaver committed to substantial, and initially anonymous, financial support of Joyce and published excerpts of “Ulysses” in The Egoist. Within days of arriving to live in Paris in July 1920, Joyce had enlisted the help of yet another tireless female helper. Beach played a pivotal role in bringing the full novel to print under the imprint of her bookshop and lending library, Shakespeare and Company. Objects tell the formative role of these women who were associated with innovative literary experimentation of the period—all of whom helped Joyce’s novel gain widespread notoriety and success.

In addition to the James Joyce collection, the Center hosts The James Joyce Checklist, an international database of citations and links to publications relevant to Joyce in any language and in any medium, from the early 20th century to the present. Housed at the Center in Austin are more than 550 volumes from Joyce’s Trieste library, formed between 1904 and 1920, and many other items related to Joyce are found in various collections.

The exhibition will be on view in Austin through July 17.