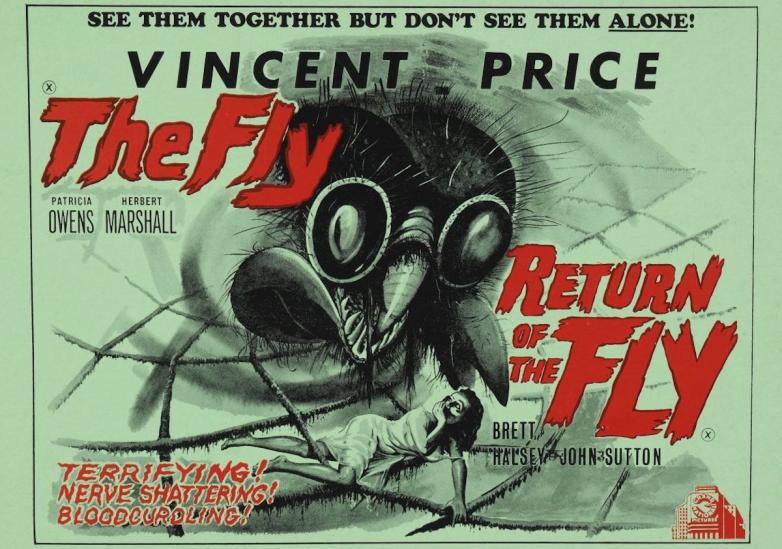 Promotional piece for the Vincent Price films "The Fly" and "Return of the Fly," offered as part of a large archive of British film promotional material at Dominic Winter Auctioneers this week.

Forum Auctions holds an online sale of Books and Works on Paper on Wednesday, August 17. Among the 297 lots are a copy of the 1763 Foulis edition of The Republic of Plato from the library of the Rose family of Kilvarock (£1,000–1,500). At the same estimate range are a subscriber's copy of Ackermann's History of the University of Oxford (1814) and a first edition of the same publisher's History of the University of Cambridge (1815). The 1509 first Aldine edition of Sallust's De Conivratione Catilinae is estimated at £600–800, as is the Foulis edition of Homer (1756–1758).

At Dominic Winter Auctioneers on Wednesday, 450 lots of Printed Books, Maps, Decorative Prints & Original Art, Urban Art, Film, Rock, Pop, Vinyl Records. A large collection of British film promotional material is expected to lead the sale, estimated at £2,000–3,000. The material ranges from the 1930s to the 1980s, and covers more than 2,000 films. A 1968 MoMa exhibition poster designed by Tadanori Yokoo could sell for £1,000–1,500. Several large topical and publisher shelf lots will also go under the hammer.