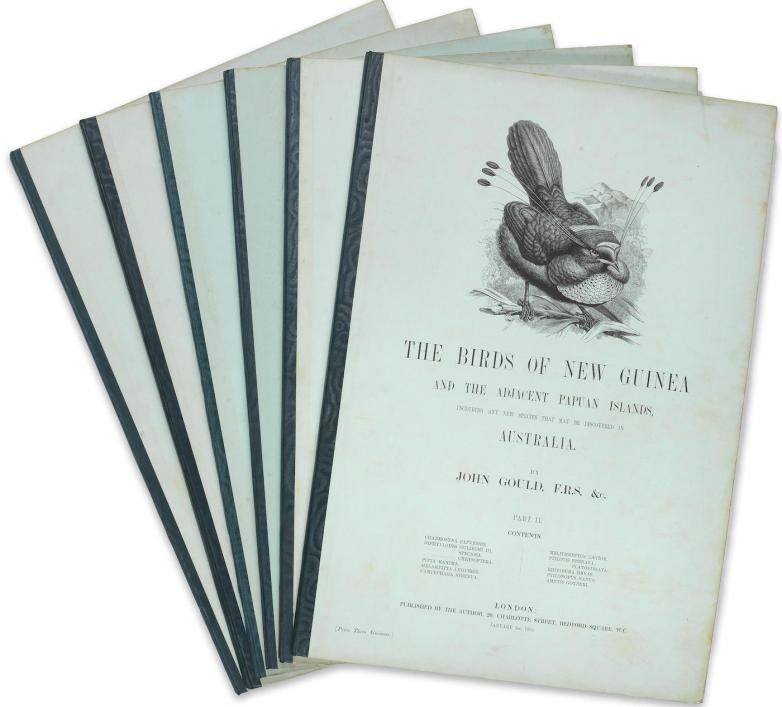 Gould and Sharpe's Birds of New Guinea and Adjacent Papuan Islands, in the original parts, offered at Bonhams this week.

It's a lively week for rare books and manuscripts auctions; here's the rundown.

At Hindman Auctions on Tuesday and Wednesday, American Historical Ephemera and Photography Featuring the Civil War and American Militaria Collection of Bruce B. Hermann. The 296 lots include a family collection of letters and photographs of the Rosborough family, estimated at $15,000–25,000. An album of 120 Mathew Brady CDVs of Union generals and officers could sell for $15,000–20,000.

Forum Auctions sells the Gastronomy Library of the Late Caroline Crisford on Thursday, June 23. The 158 lots include La Varenne's The French Cook (1564) and Hannah Glasse's Art of Cookery Made Plain and Easy (1747), each expected to sell for £3,000–4,000.

At Aguttes on Thursday, Aristophil 50, Autographes & Manuscrits Musicaux, in 263 lots. A handful of Olivier Messiaen music manuscripts are expected to fetch the highest prices.