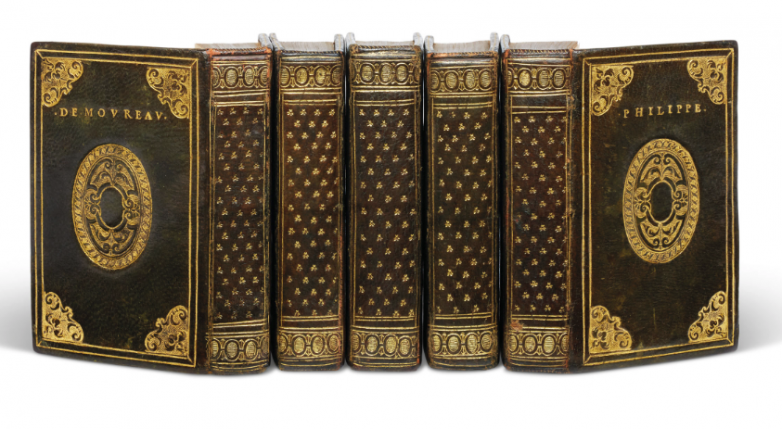 Another busy week coming up.

At Christie's Paris on Tuesday, March 23, the first part of La bibliothèque poétique de Jean Paul Barbier-Mueller, in 121 lots. A number of Pierre de Ronsard editions are expected to sell well, including a copy of the five-volume third collected edition of Ronsard's works (1571), in a period binding bearing the name of the original owner, Philippe de Moureau. This copy's fifth volume was separated from the set at some point in the twentieth century, and reunited by Pierre Berès. At this sale it is estimated at €150,000–200,000. A mixed set of the second collected edition (1567), with annotations by Jean de Piochet in three of the volumes, could sell for €80,000–120,000. A volume containing three Ronsard titles published 1553–1555, in a mosaic binding with the arms of Pierre de Brisay de Denonville, is estimated at €60,000–80,000. Two works by Joachim du Bellay, La Deffence and L'Olive (1549), bound together and from the library of Marcus Fugger, are estimated at €100,000–150,000.

Thursday's sales begin with Fine Books, Manuscripts and Works on Paper at Forum Auctions, in 308 lots. A thick-paper copy of the first book edition of The Federalist, the Bedlow-Crosby-Rutgers-Vanneck copy with family provenance back to the year of publication, is estimated at £60,000–80,000. The first book printed in Ge'ez, an edition of the Psalms published at Rome in 1513, is estimated at £10,000–15,000. William Randolph Hearst's copy of the Doves Bible, in a Stikeman & Co. binding, could sell for £6,000–8,000.

At Swann Galleries on Thursday, 356 lots of Printed & Manuscript African Americana. A prepublication typed draft of MLK's "Letter from Birmingham Jail" shares the top estimate of $15,000–25,000 with an 1878 carte de visite portrait of Frederick Douglass by Samuel M. Fassett, signed by Douglass on the verso, and a copy of the first printing of the 1933 Night-Club Map of Harlem by E. Simms Campbell.

Friday, March 25 at PBA Galleries will be a 394-lot sale of Space Travel – Fine Press – Maps – Americana – Books in all Fields. Most lots will be offered without reserve.

Arader Galleries holds their Spring Auction on Saturday, March 27, in 166 lots. A copy of Audubon's Quadrupeds rates the top estimate, at $400,000–600,000. There is also a copy of Catesby's Natural History of Carolina, Florida, and the Bahama Islands previously in the collections of the Library Company of Baltimore and the Maryland Historical Society, estimated at $300,000–400,000.