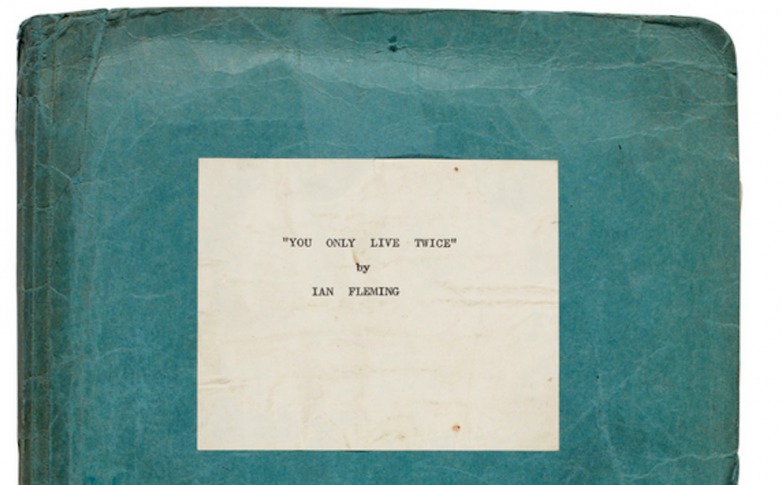 Corrected typescript of Ian Fleming's You Only Live Twice (1963), offered at Sotheby's London this week.

The Gaon of Vilna and his Disciples - Books and Manuscripts from the Yeshayahu Vinograd Collection will be sold at Jerusalem's Kedem Auctions on Tuesday, February 2. The 178 lots come from the collection of publisher and bibliographer Yeshayahu Vinograd which focuses on the school of the disciples of Rabbi Eliyahu of Vilna (1720–1797).

Forum Auctions sells Books and Works on Paper on Thursday, in 232 lots. A complete set (perhaps the only known) of the 1830s suite of fourteen Valentine's Day poems Unrequited Love, or "The Despondent Lover rates the top estimate, at £2,000–3,000, while a copy of Samuel Collins' A Systeme of Anatomy (1685) is estimated at £1,000–1,500. A collection of ten Valentine's Day cards from around 1835 and printed by Kershaw & Son could sell for £700–1,000, and there will be several other lots of great interest to the Valentine collector.

Also on Thursday, The Artists of the WPA at Swann Galleries, in 236 lots. An interesting range of posters, photographs, lithographs and other pieces in this sale.

The Sotheby's London sale of Detective Fiction Including the Alexis Galanos Collection ends on Thursday; the 185 lots include the corrected typescript of Ian Fleming's You Only Live Twice (1963), estimated at £80,000–120,000. An uncorrected proof copy of the same novel, marked up for serialization in Playboy and with a file of correspondence about the serial publication could sell for £40,000–60,000. A first edition of Agatha Christie's The ABC Murders (1936) previously in the collection of Ronald Segal rates an estimate of £15,000–20,000.

And last but not least, Thursday's sales conclude with Americana – Travel – Exploration – World History – Cartography at PBA Galleries. Among the 476 lots are that large Carleton E. Watkins photograph of San Francisco's Cliff House from the Marilyn Blaisdell collection ($6,000–9,000) and a 1699 London edition of Bartolomé de las Casas' Account of the First Voyages and Discoveries made by the Spaniards in America ($5,000–8,000).