At Heritage Auctions: All 56 Signers of the Declaration of Independence 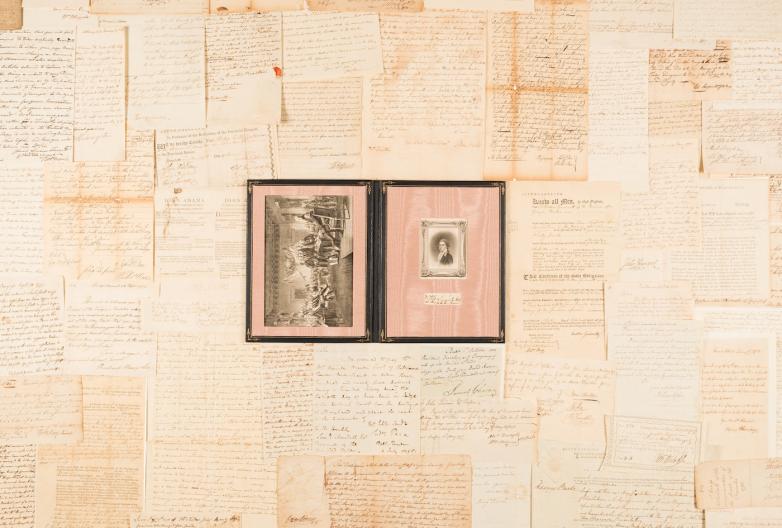 Dallas, TX — The sign's message was simple but irresistible: "History for Sale" — three words that would lead Carl Przyborowski on a four-decades-long pursuit. The Chicago-area building contractor saw the enticing sign outside a specialty shop on the Las Vegas Strip, where he and his wife were vacationing in the mid-1980s. Intrigued, he entered the gallery-like space and stepped into a whole new world — a place where the past was the present and where, for Przyborowski, a new passion was born.

"This store was full of historical manuscript material beautifully framed, adorning the walls, and I was hooked on it right away," he says. "Shortly after that, after noticing my enthusiasm, my wife secretly purchased and gifted me my first piece, which was a signed check from Orville Wright, accompanied by a photoof Kitty Hawk."

What started as one piece — a relic from an aviation pioneer — became thousands of pieces, including everything from letters written by Napoleon Bonaparte to signatures from the Three Stooges. "My collectingwas all over the place," he says.

Eventually a collecting focus emerged for Przyborowski: the American Revolution and the country's Founding Fathers. He became so passionate about that period in U.S. history that he embarked on a quest to acquire signatures from all the signers of the United States Declaration of Independence, the Articles of Confederation and the U.S. Constitution — what he calls "the trifecta of American documents" — in addition to other related manuscript material.

With only 40 or so complete sets of signers of the Declaration of Independence in existence, most of those housed in institutions or public libraries, Przyborowski became part of a tiny circle of collectors. Now, in partnership with Heritage Auctions, he's offering other history enthusiasts a chance to take his place in the exclusive club.

On June 25, Heritage will present The Founding Fathers' Fight for Liberty and the Birth of a New Nation — Part I Manuscripts Signature® Auction, featuring the crown jewels of Przyborowski's unparalleled collection, including his complete set of signers of the Declaration of Independence. Only a handful of complete sets have been offered at auction in the past century, with the last crossing the block a decade ago.

"Owning a complete set of signatures of the signers of the Declaration of Independence is the absolute pinnacle of American autograph collecting," says Joe Maddalena, Heritage Auctions Executive Vice President. "This is an exceedingly rare, possibly once-in-a-lifetime opportunity to obtain a collection of letters and documents once held by those brave individuals who pressed their names to the most famous document in American history nearly 250 years ago."

Przyborowski's set of Declaration signers features manuscript material from all 56 men who, in 1776, took the first step toward forming the United States of America, as well as items from Secretary of the Continental Congress Charles Thomson and framer of the Declaration of Independence Robert Livingston, culminating in a total of 58 manuscript items. The set also includes one of the finest examples of the very few Button Gwinnett autographs to be offered in more than 25 years.

Gwinnett, who signed the Declaration as a representative from Georgia, died in a duel at the young age of 42, and few of his personal papers were preserved, making his signature the rarest of all the document's signers. The most recent census, conducted in 2008, recorded only 51 extant Gwinnett autographs, 40 of which reside in institutional collections.

Thomas Lynch Jr., who signed the Declaration of Independence as a representative of South Carolina, died in 1779 when a ship on which he was a passenger was lost at sea. At just 30 years old, Lynch became the youngest signer of the Declaration to die, and his signature is the second-scarcest of all the signers. The Lynch signature in Przyborowski's collection — clipped from a larger manuscript and accompanied by an engraved scene of the signing of the Declaration of Independence — is one of only a handful to be offered in the past 50 years.

"Button Gwinnett and Thomas Lynch Jr. — those are the two trophies of any signers set," Przyborowski says.

Another highlight of the event is a collection of letters written by George Washington to Continental Army General Alexander McDougall. Written from places like Morristown and Valley Forge, two of the most noteworthy encampments of the Revolutionary War, the letters were not known to exist until an heir of McDougall found them years ago in a tattered suitcase in his garage — a historic discovery that was chronicled in a February 1968 issue of Life magazine.

When about 50 of the letters found their way into the hands of the late Joseph Rubinfine, a highly respected dealer of historical manuscripts, Przyborowski was given an early look at the extraordinarily rare assemblage. "I purchased 12 of the letters, even though I couldn't afford them at that time," he says. "Mr. Rubinfine considered them to be the most important find of American historical manuscript material in the last 100 years. I absolutely loved the material, and I wanted to be a part of it."

Accompanying the signers sets and Washington letters is a large quantity of original manuscript material associated with the Founding Fathers. Among the offerings is a large cache of letters and documents of Washington's Revolutionary War generals, most of which are of war date with war content and many of which were written from military encampments or from close proximities to fields of battle. Rounding out the auction are more than a dozen Revolutionary War-era newspapers.The publications, which Washington relied on to promote and maintain support for the American revolutionary cause, were largely responsible for communicating news of war activities to the American population.

All of the pieces in Przyborowski's collection possess incredible historical value, but the handwritten documents' historical importance wasn't the only factor that attracted him to the items he sought out.

"It was also the way that these people would write," he says. "Their penmanship, first of all, was beautiful, considering they were writing with a feather quill. But they also wrote with eloquence and emotional expression that has long since become a casualty of time.Some of the letters in my collection are just wonderful and beautiful in both appearance and content."

On quiet nights at home, Przyborowski can often be found poring over centuries-old letters penned by the likes of Thomas Jefferson, Alexander Hamilton, Benjamin Franklin and James Madison. Nestled in his study, lamplight illuminating what was likely written by candlelight, he places his hand beneath each signature and ponders the momentous circumstances that prompted such missives.

"Over the years, my passion became spiritual-like, as I focused on the words of these great men who wrote so eloquently on subjects of such major importance," he says. "Plus, they held these papers in their hands. These aren't printed versions or photocopies; they are the actual manuscripts they wrote. It's a very close connection. 'From their hands to mine,' I always say."

Parting with the treasures he has spent nearly 40 years amassing has been an emotional journey for Przyborowski."When Heritage Auctions backed a vehicle into my garage to load it for transport, I kissed the last container goodbye," he says. "As emotionally difficult as this has been for me, I do believe now is the appropriate time to facilitate a transition of what was and will always be important to me to others who will continue on with the preservation of such wonderful documentation of our American history, to hopefully appreciate, enjoy and honor it as much as I have."

While Przyborowski is selling nearly his entire collection through the June 25 auction and subsequent Heritage auctions, he is keeping a few select pieces for himself, including that Orville Wright-signed check his wife gifted him so many years ago."That stays with me," he says. "It has too much sentimental value to part with."