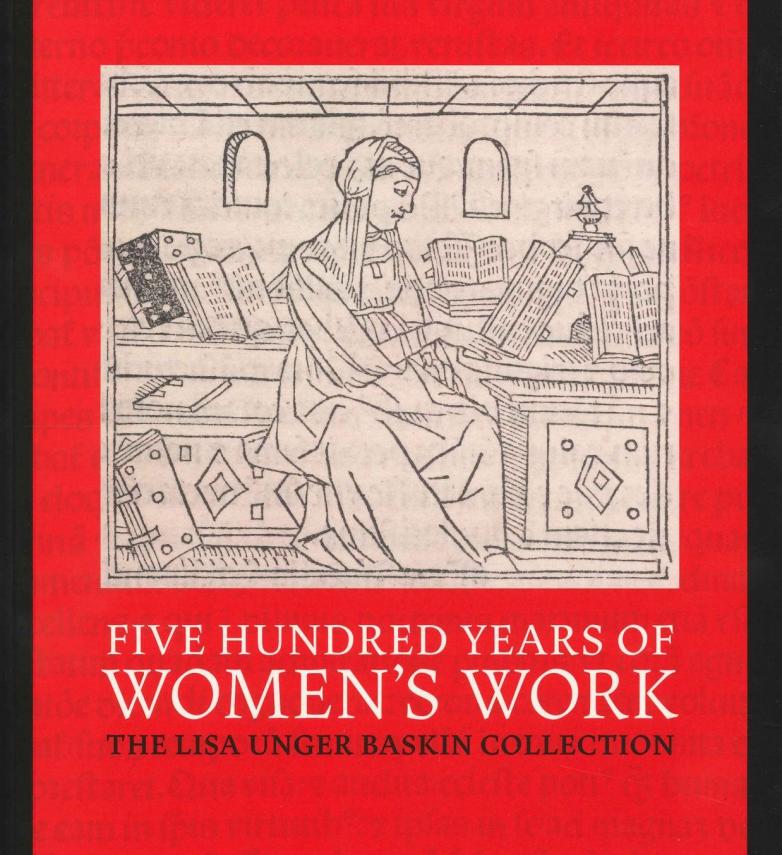 A man may work from sun to sun, but a woman’s work is never done, as the old adage goes. Pity, then, the collector of women’s work, whose subject is virtually uncontainable, not to mention largely obscured. But Lisa Unger Baskin has persisted and prevailed at it over the past 45 years, ultimately placing her massive collection at Duke University’s Sallie Bingham Center for Women’s History & Culture in the David M. Rubenstein Rare Book & Manuscript Library in 2015. A major exhibition of her collection, Five Hundred Years of Women’s Work, opened at the Grolier Club in New York City last week. Co-curated by Unger Baskin, Naomi L. Nelson, and Lauren Reno, the exhibition debuted at Duke earlier this year.

A year after Duke’s acquisition, while the cataloguing was in process, Laura Micham, director of the Bingham Center, wrote an article about the collection for our summer 2016 issue, noting its incredible range: “Comprised of more than ten thousand print items, over 250 manuscripts collections, and an extensive collection of artifacts from a British suffrage tea set (the most complete known of its kind) to Virginia Woolf’s writing desk, the Lisa Unger Baskin Collection is a transformative body of material focusing on women’s work in all its diversity.”

Among the highlights currently on view are: a land grant from 1240 for a home for repentant prostitutes in Pisa; Hore beatissime virginis Marie, printed in Paris in 1546 by Yolande Bonhomme, one of the most prominent woman printers and booksellers in sixteenth-century Paris; a signed first edition of the first book published by an African American, Phillis Wheatley’s Poems on Various Subjects, Religious and Moral (London, 1773); a selection of manuscripts, correspondence, images, and artifacts related to the Ladies of Llangollen, who made a life for themselves as a same-sex couple in Wales in the late eighteenth century; and an 1897 letter from Elizabeth Cady Stanton to Sarah M’Clintock inquiring “Would you sell the table on which the Declaration [of Sentiments] was written and what would you ask for it?”

It was a collection spurred by activism, writes Unger Baskin in the exhibition’s catalog, published by Duke Libraries and the Grolier Club and distributed by Oak Knoll Press. “In the 1960s, I actively began collecting things related to women. The core of the collection was, and is, social history. My politics informed my collecting.” Her essay is titled “Insatiable Lust: or, The story of how a nice girl from Brooklyn fell hard for books and amassed a collection spanning nine centuries,” and it is a delight to read. It is complemented by essays by Laura Micham and Elizabeth Campbell Denlinger, curator of the Pforzheimer Collection of Shelley and His Circle at the NYPL.

Most of the catalog is given over to a vibrant, illustrated list of the 116 exhibit items, featuring one superlative after the next, e.g., the astonishing first book (1642-44) on obstetrics written by a woman, Louise Bourgeois Boursier; a breathtaking needlework sampler (ca. 1840s) by Charlotte Brontë; and a stunning illuminated manuscript (1892) by Irish-born artist Phoebe Anna Traquair. Unger Baskin’s awe-inspiring achievement is justly celebrated between the catalog’s thick paper covers and should enthrall anyone with allied interests, which is to say, literature, education, civil rights, suffrage, slavery and abolition, science and medicine, and printing and book arts.

The Grolier Club plans to hold a related symposium, Women in the Book Arts, on January 21, 2020, 9:30 a.m.- 4:30 p.m. Dr. Nell Irvin Painter, Edwards Professor of American History Emerita at Princeton University, will be the keynote speaker.

The exhibition will remain on view in New York through February 8, 2020.