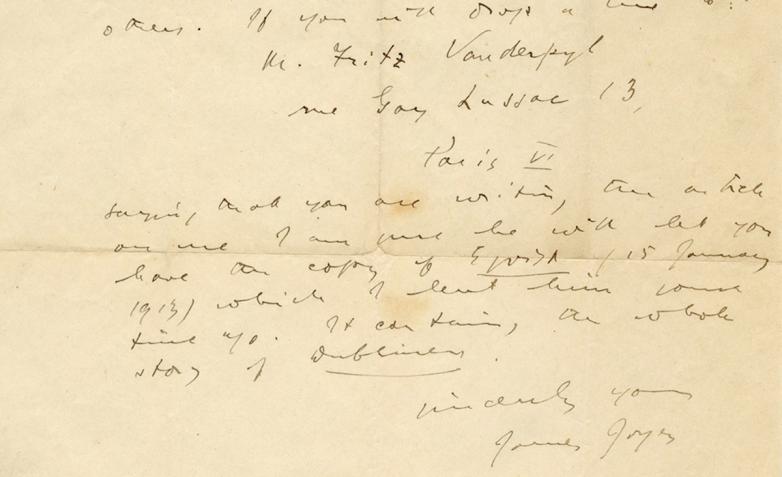 Chicago — Potter & Potter Auctions is pleased to announce this 230+ lot sale to be held on Tuesday, April 26th starting at 10am. The event will be held online and live streamed, with a limited number of bidders physically allowed in the gallery as determined by current Illinois public health attendance guidelines. Please call the auction house, located at 5001 W Belmont Avenue in Chicago, at 773-472-1442 to reserve seats. Bidding will take place through Potter & Potter's website, at www.potterauctions.com. Phone and absentee bids are also welcome. All items are available for in-person preview, by appointment only.

Signed, first edition books from the prewar era take several of the top lot slots at this extraordinary event.

·       Lot #74, a presentation copy of F. Scott Fitzgerald's (1896–1940) The Great Gatsby, is estimated at $30,000-50,000. It was published in New York by Charles Scribner's Sons in 1925. It is inscribed, “With the Pleasant memories of La Paix behind me alas and alack! Souvenir of 1932–1933 for M.T. from her – at least from one who was almost made to feel like – a guest. F. Scott Fitzgerald.” The inscription is to Margaret Turnbull, who owned La Paix, an estate with a large house near Towson, Maryland. The Fitzgeralds rented La Paix in 1932 and 1933 because of its proximity to Johns Hopkins, where Zelda Fitzgerald was being treated. This book is considered “one of the half–dozen best American novels… it remains a prose poem of delight and sadness which has by now introduced two generations to the romance of America…” (Connolly).
·       Lot #84, a presentation copy of Robert Frost's (1874–1963) North of Boston, is estimated at 10,000-15,000. It was published in London by David Nutt in 1914. This example of Frost's second book is a first edition, first issue, binding A (one of 350 copies) and is inscribed, “for Gordon Chalmers” and includes the poem Spring Pools in its entirety. Chalmers, long–time President of Kenyon College, and his wife were friends of the author. Nearly all of the books inscribed by Frost to Chalmers are presentation copies and are virtually unobtainable with the last selling in 2002. This copy last traded hands at Christie’s on 6 October 1994.
·       Lot #107, a first edition, first issue copy of Ernest Hemingway's (1899–1961) A Farewell to Arms, is estimated at $4,000-6,000. It was published in New York by Charles Scribner’s Sons. This copy includes its original first issue dust jacket. It is inscribed to a reporter covering the Civil War in Spain, “To Edgar A. Mowrer / with sincere admiration / Ernest Hemingway”. Mowrer worked for The Chicago News covering the Civil War in Spain. He also helped Hemingway raise money for emergency medical help in Marseilles. The two maintained correspondence for over a decade.
·       Lot #221, a copy of Oscar Wilde's (1854–1900) The Ballad of Reading Gaol, is estimated at $7,000-10,000. It was published in London by Leonard Smithers in 1898. This limited edition copy, number 16 of 99, is signed by Wilde. The book was published anonymously, using the name “C.3.3.”, Wilde’s number at Reading prison where he was jailed after being convicted of homosexual offenses in 1895. Wilde was fearful of the negative associations with his name, but word leaked about the identity of this work and the book immediately became a commercial success and one of Wilde’s most recognized works.

·       Lot #7, a copy of Isaac Asimov's (1920–1992) I, Robot, is estimated at $3,000-5,000. It was published in 1950 by Gnome Press in New York. This first edition of Asimov’s second book is considered “by most critical accounts one of the most influential books in the history of modern science fiction because it established new conventions for writing robot stories” (Touponce, Isaac Asimov p. 32). This presentation copy is inscribed, “For Edith Ogutsch / The name will be changed / for the better after marriage. / For the worse, it couldn’t be. / But I love you. / 12/3/1950 / Isaac Asimov”. Ogutsch was a poet and science fiction and fantasy author.
·       Lot #211, a copy of John Kennedy Toole's A Confederacy of Dunces, is estimated at $3,000-5,000. It was published in Baton Rouge and London by the Louisiana State University Press in 1980. This first edition is one of 2,500 copies printed and includes the first edition dust jacket with a review by Walker Percy. It is inscribed by the author’s mother “Nov. 2, 1980 / Appreciation and regards from John Kennedy Toole’s mother / Thelma Ducoing Toole / to / Caroline Frances Baker”.  Toole sent his manuscript to every publisher in America, all of whom rejected it. After the final rejection, Toole committed suicide at 32. His mother gave the manuscript to author Walker Percy, who secured its publication by Louisiana State University Press, and it was awarded a posthumous Pulitzer Prize.
·       Lot #39, a first edition of Arthur C. Clarke's 2001 A Space Odyssey, is estimated at $3,000-5,000. It was published in 1968 in New York by The New American Library. This book is from the library of Frederick C. Durant III (1916–2015) a leading figure in the pantheon of space pioneers. He was heavily involved in rocketry in the United States during the period between the end of World War II and the mid–1960s.  The book is inscribed, To Pip & Fred – / with love / Arthur / Chevy Chase / 24 Oct. ‘77”.

Also on offer are world class selections of letters, documents, and other literature-themed ephemera.

·       Lot #26, a typed document signed by Truman Capote (1924-1984) for the motion picture rights to the novel In Cold Blood, is estimated at $4,000-6,000. This contractual agreement, dated 9 November 1965, is two pages long and details the agreement between Columbia Pictures Corporation and Capote in regard to acquiring the motion picture and certain allied rights for the soon-to-be published novel. The film was released in 1967 and was nominated for four Academy Awards including Best Adapted Screenplay.
·       Lot #136, letter signed by James Joyce (1882–1941) to Madame Yasushi Tanaka (Louise Gebhard Cann), is estimated at $10,000-15,000. The one page note is dated 29 November 1920 and is Joyce's response to a request from Ms. Cann - a prominent writer and art critic in early 20th century France - that she be sent materials for an article. He directs her to an acquaintance who will have more, adding at the end, “...I am sure he will let you have the copy of The Egoist (15 January 1913) which I lent him some time ago. It contains the whole story of The Dubliners. Sincerely yours, James Joyce.”

This sale comes full circle with a spectrum of noteworthy publications, including a number of important first editions from legacy 20th century authors.

·       Lot #6, Sherwood Anderson's (1876–1941) Winesburg, Ohio, is estimated at $7,000-9,000. It was published in 1919 in New York by B.W. Huebsch. This extremely rare, first edition, first issue copy includes its original printed dust jacket. This publication is considered Anderson’s most desirable work, being a collection of 22 short stories set in Winesburg, Ohio.
·       Lot #100, a first edition copy of Dashiell Hammett's The Maltese Falcon, is estimated at $8,000-12,000. It was printed in 1930 in New York by Alfred A. Knopf and includes its rare original first issue dust jacket with the summary printed on the front flap and a custom cloth folding box by Dragonfly Bindery. The Maltese Falcon is considered by many as Hammett's best work and was voted No. 2 of The Top 100 Mystery Novels of All Time by the Mystery Writers of America.

According to Christopher Brink, Potter & Potter Auctions' Director of Fine Books and Manuscripts, "This sale will feature an exceptional opportunity for bidders to obtain some of the choicest first editions of important literature on the market. For most of us, the books offered with intimate presentation inscriptions by the author are the closest one will get to the hand that wrote it. Even the copies that aren't signed offer up their rare dust jacket for our visual pleasure."