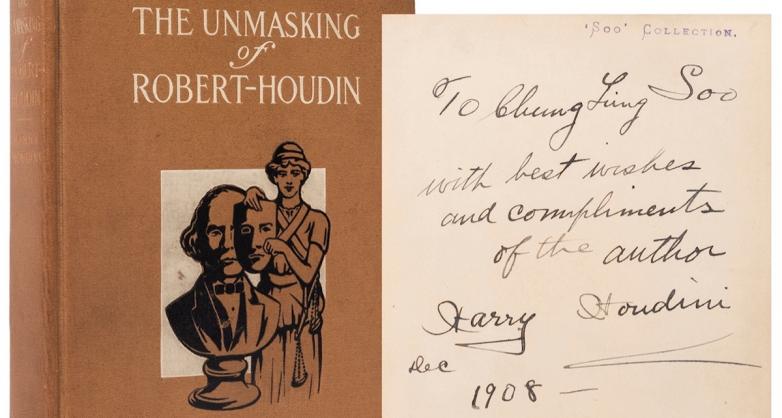 A signed first edition of Harry Houdini’s The Unmasking of Robert-Houdin made $26,400.

Important magic-related books and manuscripts took many of the top slots in this sale, with several lots generating astonishing results.
•    Lot #52, a first edition copy of Harry Houdini's The Unmasking of Robert-Houdin, was estimated at $4,000-8,000 and finally landed at $26,400 - a new world's record for a signed Houdini book. It was published in New York by The Publishers Printing Co. in 1908 and was inscribed to friend and colleague Chung Ling Soo, To Chung Ling Soo / with best wishes / and compliments / of the author / Harry Houdini / Dec / 1908.
•    Lot #1, a diary kept by Claude Alexander Conlin during his travels to the Alaskan goldfields in 1898, was estimated at $3,000-6,000 and traded hands at $22,800. Discovered in 2014, it was signed on the inside cover and written in his own hand.
•    Lot #119, a complete file of The Sphinx from 1902-1953 was estimated at $2,500-5,000 and made $19,200. The set, with provenance to magic columnist John Henry Grossman, was bound in 22 matching maroon buckram volumes. This publication is universally regarded as one of the best records of conjuring in the twentieth century.
•    Lot #111, Dr. Jacob Daley’s sleight-of-hand notebook from 1936 onward, was estimated at $2,500-5,000 and sold for $10,800. This tome was owned, used, and kept by Dr. Daley as his private notebook of magic techniques, sleights, and routines.
•    Lot #39, inventor Winston Freer's three page Gwynne’s Authentic Hindu Levitation manuscript was estimated at $250-500 and made $3,840. This letter included several elaborate drawings, was dated March 28, 1939, and was in essence an elaborate illusion pitch to magician Jack Gwynne. 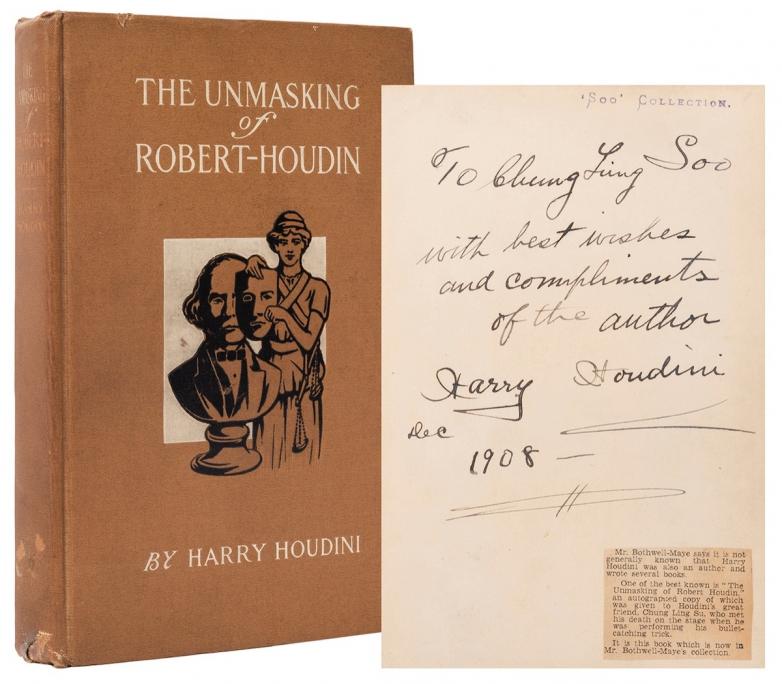 Fully provenanced apparatus and conjuring materials - many from the best known 20th century magicians - also lapped their preauction estimates.
•    Lot #108, Dai Vernon’s Porper cups and balls, made an astonishing $18,000 - 12 times its low estimate. This c. 1980 set consisted of three brass cups, four crocheted balls, and a wooden wand with brass tips. It was custom made by Joe Porper and presented to Dai Vernon.
•    Lot #89, a second series Robert-Houdin glass dial mystery clock, was estimated at $5,000-10,000 and realized $16,800. It featured an arrow-shaped hand resting at the center of its clear glass dial, supported by a gilded bezel.
•    Lot #66, handcuffs owned by Harry Houdini, were estimated at $2,500-5,000 and delivered $15,600. They included an ID tag written in the hand of Joseph Dunninger, Houdini’s friend and fellow magician. It read, "This pr. of handcuffs I present to my friend Rossi / they belonged to Harry Houdini / Dunninger.”
•    Lot #40, Martin's c. 1940s glass through hat trick was estimated at $2,500-3,500 and broke through at $10,800. This illusion featured a finely made aluminum mechanism with a push-button activation in the tray, a double lazy-tong arrangement, and a slow-release device.
•    Lot #3, Alexander’s c. 1950s Turkish harem dance naughty novelty made $3,840 - nearly 20 times its low estimate. This apparatus was based on the classic “rattlesnake eggs” gag; the red covered book began buzzing in the hand of the viewer when it was opened, revealing photographs of a topless “harem” girl.
•    Lot #122, four bread crumbs used in Rene Lavand’s famous routine The Three Breadcrumbs, was estimated at $100-200 and scored $2,280. These props were obtained by the consignor directly from Lavand in the course of preparing a book on Lavand’s magic, and were accompanied by a letter of authenticity.

Stunning lithographs from legacy magicians also captured the interest, and pocketbooks, of magicana collectors worldwide.
•    Lot #72, a c. 1896 lithograph promoting Harry Keller, was estimated at $8,000-12,000 and made $14,400. This example pictured the magician with a demon whispering in his ear and surrounded by owls, bats, and demons amidst vignettes from his show. This poster was printed at the height of Kellar’s popularity during his reign as the most successful and accomplished magician in America.
•    Lot #73, a c. 1894 half-length portrait of Harry Keller with two imps perched on his shoulders, sold for $10,800. This framed, linen backed piece, titled Kellar the Great Magician, was a rare variant of this legacy poster.
•    Lot #29, a c. 1905, artistically rendered color lithograph featuring a bust of T. Nelson Downs, King of Koins, traded hands at $10,200.  Printed in Chicago by Carqueville Litho, it featured the performer surrounded by vignettes of his coin manipulation act, ribbons of silver coins, and soft red flowers.
•    Lot #28, a color lithograph of Chung Ling Soo. The Light of the World. Marvellous Chinese Conjurer, was estimated at $4,000-6,000 and realized $10,200. This rare, linen backed image was printed around 1910 in Birmingham by James Upton and featured the magician holding a lantern in one hand, with silhouettes of pagodas behind him.

Ephemera, broadsides, personal effects, and rarities that defied traditional categories brought this memorable sale full circle.
•    Lot #22, Cardini’s fully provenanced, stage-worn tuxedo, sold for $20,400 - nearly twice its high estimate. This wool swallowtail coat, with striped pants, was tailor-made for Cardini in London by Sidney Fisher in 1933. It was sold with a set of spats, a pocket handkerchief, a cravat, a collar, a dress shirt from Selfridge’s, and a top hat.
•    Lot #76, an Empire Theatre broadside advertising Lafayette’s performances for the week of May 1, 1911 – just days before his life would be claimed by a fire that destroyed the Empire Theatre - realized $10,200. Printed in 1911, this broadside was one of a handful of posters from Lafayatte’s final performances known.
•    Lot #53, a playing card inscribed and signed by Houdini, was estimated at $1,500-2,500 and delivered $11,400. This card, an ace of diamonds with a blue patterned back, was dated July 9, 1924 and was autographed “To M.C. Wilson / Best wishes / Houdini / July 9/1924.” by the master magician in brown ink.

According to Gabe Fajuri, President at Potter & Potter Auctions, "This was the little auction that could - and did! We were blown away by the results, which, in the end, yielded huge returns for all of our consignors. It's rare that an auction house breaks its own records, and yet the sale did so time and time again. Never have I seen such fervent competition across the board, but after 13 years of conducting auctions of this type of material, I'm glad that we have reached a new and expanded level of interest in what is an endlessly fascinating subject."