Klosterman Magic Collection Part I at Potter & Potter in October 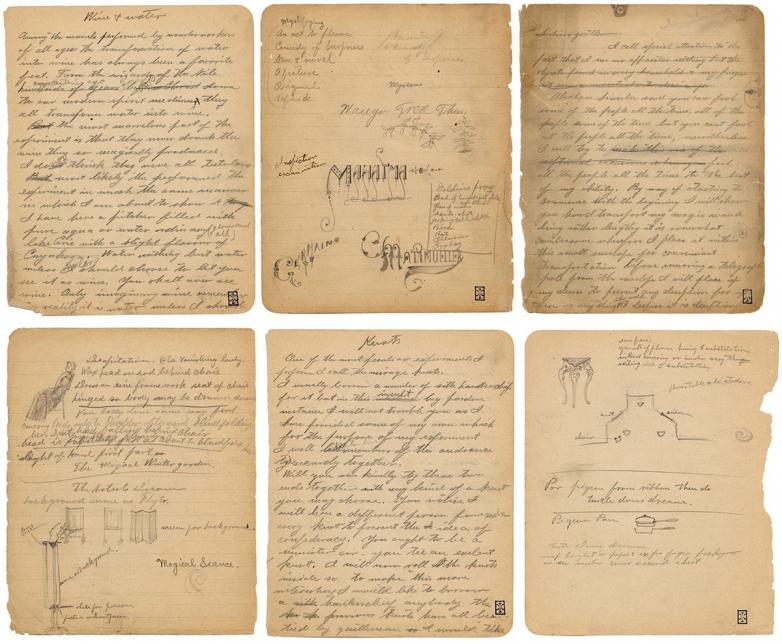 Chicago — Potter & Potter Auctions is pleased to announce this 365 lot sale to be held on Saturday, October 30th starting at 10am CDT. The event will be held online and live streamed, with a limited number of bidders physically allowed in the gallery as determined by current Illinois public health attendance guidelines. Please call the auction house, located at 5001 W. Belmont Avenue in Chicago, at 773-472-1442 to reserve seats, with first come, first served. Bidding will take place through Potter & Potter's website, at www.potterauctions.com. Phone and absentee bids are also welcome. Live auction previews for this sale will take place in Potter & Potters' Chicago gallery on October 28 and 29 from 10am - 5pm.

Please note: Potter & Potter is also hosting by-appointment previews of the Salon de Magie from October 1st through the 5th in Loveland, OH. Contact Potter & Potter Auctions directly to arrange your private museum tour to preview this and forthcoming sales.

Apparatus with provenance to the most important magicians of the past two centuries take center stage at this once in a lifetime event.
•    Lot #34, The Light and Heavy Chest owned and used by Jean-Eugéne Robert-Houdin, is estimated at $50,000-100,000. Made in France in 1844, this hardwood box becomes light as a feather or immovable, based on the magician's command. Arguably the most historically significant conjuring prop of the modern era performance, this chest was chronicled in great detail Houdin's Memoirs and Secrets of Stage Conjuring.
•    Lot #119, Harry Kellar’s Louis XIV-style gilded table, is estimated at $25,000-35,000. It is detailed with cabriole legs, a carved base incorporating a Bacchus-like head and flowers and foliage, and four faces at the top of each leg. It houses some thirteen secret devices, including various traps, electrical connections, and pistons to control a Devil’s Head automaton.
•    Lot #95, Karl Germain's Blooming Rose Bush from 1900, is estimated at $20,000-30,000. With this trick, The magician shows an empty pot, fills it with dirt, plants a seed inside, and places it on a table. As he waves a fan over the pot, a plant begins to grow, developing into a rose bush with real flowers. At full bloom, the magician cuts the flowers and hands them to the audience. This example is considered the most storied, poetic, and remarkable creations of Karl Germain, and arguably his best-known illusion.
•    Lot #120, Harry Kellar’s Devil Head Automaton from 1880, is estimated at $15,000-25,000. This red and green head is detailed with a mustache, beard, and horns, and rests on a pedestal supported by a brass column. In performance, the devil’s eyes rolls, its mouth opens, and then, after a cloud of smoke escapes from the jaws of the beast, two cards appears between its lips, while another pair pop in to view between its horns.
•    Lot #84, T. Nelson Downs’ wooden and metal coin ladder, is estimated at $10,000-20,000. In performance, Downs first commanded the coins to cascade individually through the device, then ordered the remaining ones to “hurry up!” They did just that, ending with a flurry of coins rushing down the ladder in groups. Chapter 13 of Downs’ The Art of Magic (1909) describes his routine with this coin ladder in minute detail, from the construction and operation of the prop to the presentation of the routine.
•    Lot #267, the Margery Bell Box from 1924, is estimated at $10,000-20,000. This wooden box is outfitted with a spring-activated lever, which when pressed, completes a circuit ringing a bell. It is modeled on the box used to test the Boston medium Margery to disprove her abilities in the séance room as legitimate. It was formerly owned by Houdini, who exposed Margery as a fraud.
•    Lot #116, Stanley Jaks’ Book of Mysteries from 1936, is estimated at $10,000-15,000. This book box is bound in leather with silver detailing on the front board, including the text “PACABA” flanked by two mystical symbols. Inside, the book holds two trays of miniature magic props used for many of Jaks’ most famous routines, along with a plush-covered working surface - said to be one of the first examples of a close-up mat.

This sale offers a number of extraordinary materials owned by, or featuring, Harry Houdini.
•    Lot #331, Houdini Upside Down in the Water Torture Cell, is estimated at $30,000-60,000. Printed in London in 1912 by Dangerfield, this framed broadside features a close-up inverted bust portrait of Houdini submerged in the water tank escape device that helped secure his reputation as a great escape artist. This extremely rare poster, one of only a handful extant, was displayed in the Cincinnati Art Museum from October 20, 2001 – Jan. 6, 2002.
•    Lot #261, Harry Houdini’s belt buckle, is estimated at $5,000-10,000. This 1920s era silver-toned buckle is engraved with the letter “H” in a diamond pattern. It is said to be the belt buckle he was wearing when taken to the hospital in Detroit when giving his final performance before his death. It is framed with a typed, notarized letter attesting to its provenance.
•    Lot #115, Houdini Bean Giant handcuffs, is estimated at $4,000-8,000. These ungimmicked, nickel-plated “escape proof” handcuffs were configured to be nearly impossible for a key to be inserted by the restrained. Houdini used Bean Giants to challenge other handcuff rivals. These come with a letter of provenance and were formerly owned by French magician Keith Clark, remembered as the author of the Encyclopedia of Cigarette Tricks.

Posters featuring late 19th and early 20th century legacy acts are another key category in this auction.
•    Lot #335, Kellar. Presenting his Latest and Greatest Wonder. “Gone”, is estimated at $8,000-12,000. Printed in Cincinnati by Strobridge Litho around 1900, this framed example features Kellar performing the effect invented by his co-star Paul Valadon, originally titled “Well, I’m ------!” in which an assistant, covered by a cloth, vanishes from atop a table.
•    Lot #334, Kellar. Levitation, is estimated at $8,000-10,000. Also printed by Strobridge Litho, this half-sheet stone lithograph from 1894 is illustrated with bolts of lightning streaking from the magician’s hands toward his floating assistant before him.
•    Lot #338, Makselyne’s Mysteries. The Philosophers Stone, is estimated at $6,000-9,000. Printed in London by Stafford & Co. around 1907, this framed color litho for Nevil Maskelyne’s “famous magical romance” of “refined fun and profound mystery … from St. George’s Hall" is illustrated with an erupting stove, a floating ghost, and bewildered participants.

This sale's array of magic related ephemera is also certain to conjure up significant interest.
•    Lot #346, Robert-Houdin. Soirees Fantastiques, is estimated at $8,000-12,000. Printed in London by W.J. Goldbourne around 1848, this broadside promotes an appearance of the conjurer in London. Several bills similar to this example are part of the Houdini papers at the Harry Ransom Center at the University of Texas at Austin, creating some conjecture that it was Houdini who dated the posters in blue pencil.
•    Lot #202, a lobby photograph of Chung Ling Soo, is estimated at $8,000-10,000. This framed, full length portrait pictures Soo with his assistant Suee Seen, and a girl posing as their daughter, all resplendent in Chinese robes.
•    Lot #223, Karl Germain’s Magic Notebook from 1900, is estimated at $2,500-4,500. Pages include 25 leaves in Germain’s hand, filled with notes, sketches, ideas for scripts, and instructions for many of the effects in his repertoire. This is a unique record of the wizard’s most famous effects, and a revealing look at the ideas and methods that would develop in to some of his most artistic illusions.

The selections of antique to contemporary magic books and publications on offer through this sale are certain to catch the eye of collectors worldwide.
•    Lot #263, Henry Dean's The Whole Art of Legerdemain: or, Hocus Pocus in Perfection, is estimated at $5,000-10,000. It was printed in London by H. Hawes & Co. and S. Crowder in 1763. This seventh edition has its Klosterman bookplate and is inscribed and signed on the flyleaf, “Harry Houdini / Brought home / by Dash Jun. 1906” and signed again on the terminal leaf by Houdini. Houdini’s inscription reveals that the book was purchased for him by his brother.
•    Lot #317, The Whole Art of Conjuring, is estimated at $3,000-6,000. This rare edition was printed in London by J. Catnatch around 1830. It includes its original wrappers, the upper featuring an image of a conjurer behind his table, a bottle in his hand, with props and cards before him.
•    Lot #293, a complete file of Midget Magician by Wilf Huggins, is estimated at $2,500-5,000. The collection is bound in three gilt stamped leather volumes and housed in a matching slipcase. This is number 8 of 50 files issued; each is signed and numbered by Huggins.
•    Lot #227, The Magic of Robert Harbin, is estimated at $1,500-2,500. The book was authored by Robert Harwin (Ned Williams) and self-published in London in 1970. This is number 3 of 500 copies and is the first and only edition.

This sale rounds out with magic related antiques and rarities that defy traditional auction categories.
•    Lot #269, an archive related to The Spirit Medium Margery, is estimated at $4,000-8,000. This 1920s-30s collection is comprised of hundreds of pages addressed to Hereward Carrington, the noted investigator of spiritualistic phenomena. The archive includes postcards, TLSs and ALSs, some carbons, as well as photos, publications, proof sheets, and related memorabilia.

According to Gabe Fajuri, President at Potter & Potter Auctions, "This is, without a doubt, the most historically significant sale of its kind in decades. Ken Klosterman's collection was world-famous, and my long association with Ken and his collection makes this, the first of several from his remarkable Salon de Magie, all the more special. To offer relics from the careers of Houdini, Robert-Houdin, Germain, Kellar, and their contemporaries is a once-in-a-lifetime opportunity, not only for the bidders who participate in the sale, but for our auction house, as well. These objects, many imbued with a truly significant position in the history of conjuring, have been off the market for as long as five decades. Anticipation is high, and our expectation is that this is one auction that will set records."