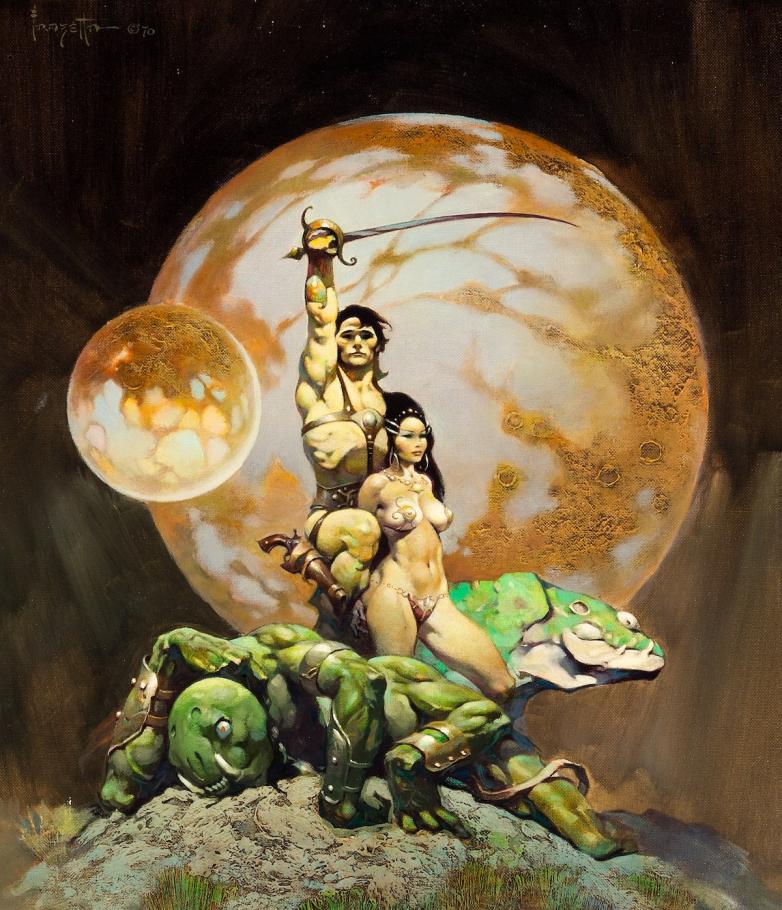 Dallas, TX – Frank Frazetta’s The Princess of Mars, one of the most identifiable and influential pieces of the artist's storied career, sold Thursday for $1.2 million. It was a remarkable and thrilling kick-off to Heritage Auctions’ four-day Comics & Comic Art event, which runs Sept. 10-13.
The first session alone realized $3,899,940 – in the span of an hour.

Frazetta’s Princess wasn’t alone in smashing pre-auction expectations during the event’s first session. Lee Elias’ now-iconic artwork adorning the cover of Chamber of Chills No. 19, published in 1953, sold for $174,000 after a spirited round of bidding. That was almost twice its original estimate. And Page 9 from Journey Into Mystery No. 112 sold for $120,000 – no surprise, given the artists involved (the legendary Jack Kirby and his longtime inker Chic Stone) and the characters (Hulk and Thor).

And John Buscema and George Klein’s splash page for The Avengers No. 58 sold for $90,000. This piece came but two years after Black Panther’s debut in the Jack Kirby-drawn Fantastic Four No. 52 in 1966, and marked the first solo splash featuring T’Challa. Buscema’s pose, that of the Panther stalking his prey, would define the character for decades to come, in the comics and on screen as portrayed by the late Chadwick Boseman, felled Aug. 28 after a 4-year battle with colon cancer.

But as he’s done so often in recent years – and throughout a fabled career that began in the 1940s and ’50s on such comic strips as Al Capp’s Lil’ Abner – Frazetta stole the spotlight Thursday.

“The trick was making a living, providing for his family, while being able to retain his originals until the day that they realized their full potential,” said the Mannarinos, who, in the 1980s, began representing Frazetta. “The solution: work for publishers, be paid for the image and have the art returned. Hence, Frazetta would not produce a work unless the art was returned. This resulted in Frazetta and his family making numerous sacrifices. It is gratifying to see Frank and [his late wife] Ellie’s confidence and their family benefiting from the sacrifices they made.”

The painting, of beautiful people on faraway planets in fantastic settings, was one of two Frazetta made for cover of Edgar Rice Burroughs' A Princess of Mars, which Doubleday republished as hardback in 1970. Frazetta sent the first take to the publisher, and was so enamored and proud of the piece he immediately began painting another for his own collection, which remained with the family following his death in 2010. It was clear how much Frazetta adored the piece because of the small details included in the second version not visible in the first. Friends and family said Frazetta liked the second painting better than the one filling fantasy readers’ bookshelves.

Said Heritage Auctions' Vice President Barry Sandoval. “This is the rare case when the second version is even better than the published one.”

More than 600 people tracked the piece as it made its way to the finish line.

The Princess of Mars, which features John Carter brandishing a sword above his head and Dejah Thoris alongside him, is the fourth Frazetta piece sold by Heritage Auctions in the last four years to top the million-dollar mark. It’s also the highest price realized for one of the painter’s pieces since his 1974 cover to the At The Earth's Core paperback sold for $1,075,500 in August 2016.

The Princess of Mars’ sale price reflects its iconic stature as the piece upon which Tom Jung modeled the first Star Wars poster — the one with Luke Skywalker wielding a lightsaber, Princess Leia at his knee, Darth Vader and the Death Star looming behind them. Countless science fiction and fantasy artists built their careers echoing the piece Frazetta painted for the world and repainted for himself.