London — Ronald H. Spector’s definitive history of World War II in the Pacific, Eagle Agaisnt the Sun, is new from The Folio Society, published to commemorate the 75th anniversary of VJ Day. 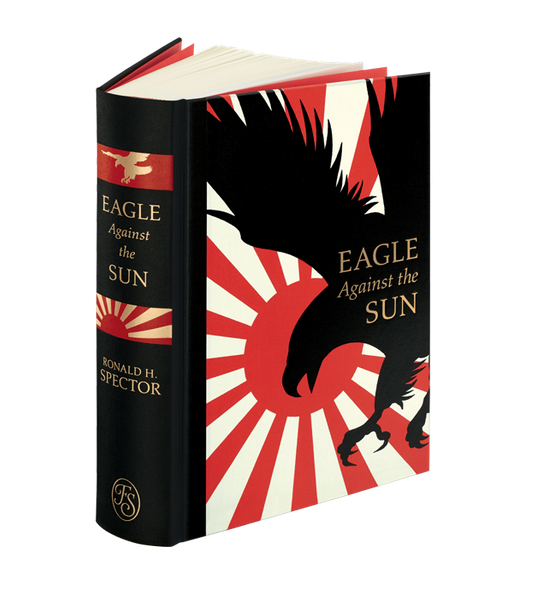 From the opening account of the raid on Pearl Harbor to the atomic bombings of Hiroshima and Nagasaki, Eagle Against the Sun chronicles the American war against Japan. This striking edition includes entirely new hand-drawn maps and 32 pages of carefully curated black and white photographs, offering readers a stunning visual companion to Spector’s dazzling, balanced and complete account.

Since its initial publication in 1985, Eagle Against the Sun has become established as the most comprehensive single-volume work on the Pacific war, and was awarded the Theodore and Franklin D. Roosevelt Prize for Naval History in 1986. It is so acclaimed that it is compulsory reading for cadet-officers at the United States military academy, West Point.

As a veteran of the US Marines in Vietnam, Spector could draw upon first-hand experience of an active warzone in the Far East. He writes powerfully about the contribution of African American troops at a time when the US military remained segregated, and the participation of women in the armed forces.

This edition includes a specially commissioned foreword by Paul Kennedy who is a Dilworth Professor of History at Yale University. Complete with a striking binding that is emblematic of the conflict, this edition is a tribute to Spector’s staggering account of one of the most horrific theatres of war in human history.