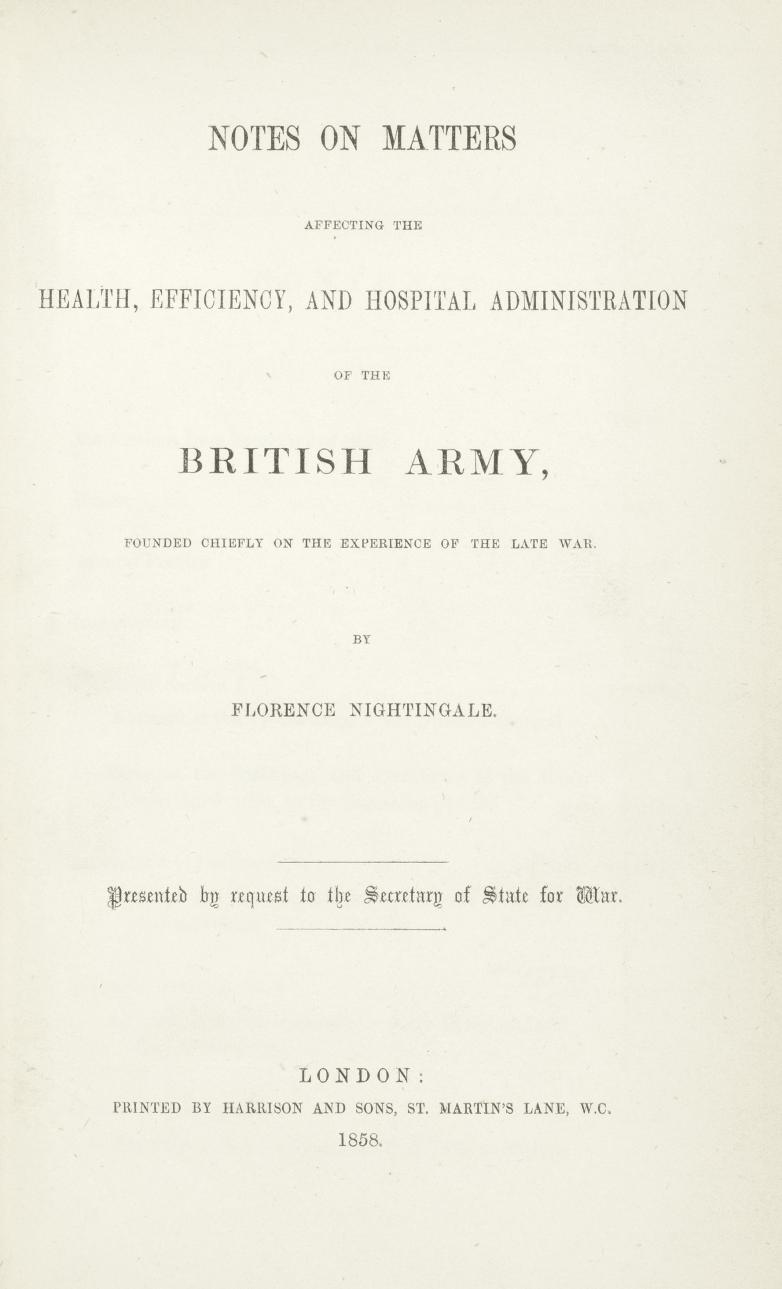 Notes on Matters Affecting the Health, Efficiency, and Hospital Administration of the British Army by Florence Nightingale. Estimate: £8.000-12,000

London — Florence Nightingale was so appalled by medical neglect during the Crimean War (1853-1856), that she wrote – and privately printed – a damning report that presented statistics in a pie chart. It is thought to be the first time that the pie chart was used in a widely circulated document. A rare, signed copy of this 1858 report that she sent to her influential friends, will be offered at Bonhams Fine Books and Manuscripts sale in London on Wednesday 4 December. Notes on Matters Affecting the Health, Efficiency, and Hospital Administration of the British Army, Founded Chiefly on the Experience of the Late War... has an estimate of £8,000-12,000.

The report exposed the horrific statistic that 16,000 of the 18,000 deaths in the Crimea were due to preventable diseases caused by poor sanitation and nursing practices. Nightingale had submitted these figures, together with detailed recommendations for reform, to the Royal Commission into Military Hospitals, set up by the Secretary of State for War, Lord Panmure, at her prompting. When the Government’s report was published earlier in 1858, many of Nightingale’s suggestions were adopted, but the statistics on death and disease were omitted Nightingale sent this copy with a hand-written letter to her banker and supporter Edward Marjoribanks, who had served as a trustee of The Nightingale Fund, set up in 1855 to raise money to establish a training institute for nurses. Although Nightingale requested that her report be kept confidential, it would seem that she hoped and expected that the contents would leak out and influence public debate.

Nightingale’s report was also notable for the early use of charts to present statistical information – including the use of pie charts – and for the application of rigorous data based analysis. She formed a close working partnership with the leading statistician of the day, William Farr, and their work is regarded as pioneering in the field.

Bonhams Senior Specialist in Books and Manuscripts, Simon Roberts, said, “This remarkable document exposed the terrible shortcomings in medical care within the British Army during the Crimean War. Florence Nightingale’s recommendations not only transformed nursing practices within the armed forces, but also civilian hospitals both in the UK and throughout the world. The bicentennial of Florence Nightingale’s birth is next year. Interest in her life and achievements is likely to be high so the appearance of this important report at auction is very timely.”

The report was consigned by the distinguished Florence Nightingale specialist Hugh Small. Other important items from Mr Small’s collection also in the sale include:

•    A scarce copy of the Report of the Commissioners Appointed to Inquire into the Regulations Affecting the Sanitary Condition of the Army, the Organization of Military Hospitals, and the Treatment of the Sick and Wounded. Estimate: £400-600.
•    A first edition of Notes on Nursing: What It Is, and What It Is Not, by Florence Nightingale, published in 1860. His copy comes from the library of a direct descendant of Richard Monckton Milnes, Nightingale's persistent but ultimately rejected suitor. This, and a number of other books with connections to Florence Nightingale, are estimated at £800-1,200.
•    Practical Hints on District Nursing (Burdett Series, No. 1), by Amy Hughes and Florence Nightingale, published 1898. Nightingale would not allow her significant contribution to the book to be acknowledged, and it is not noted by bibliographers.  Research by Hugh Small has, however, revealed that Florence Nightingale made important corrections to the proof. Estimate £400-600.