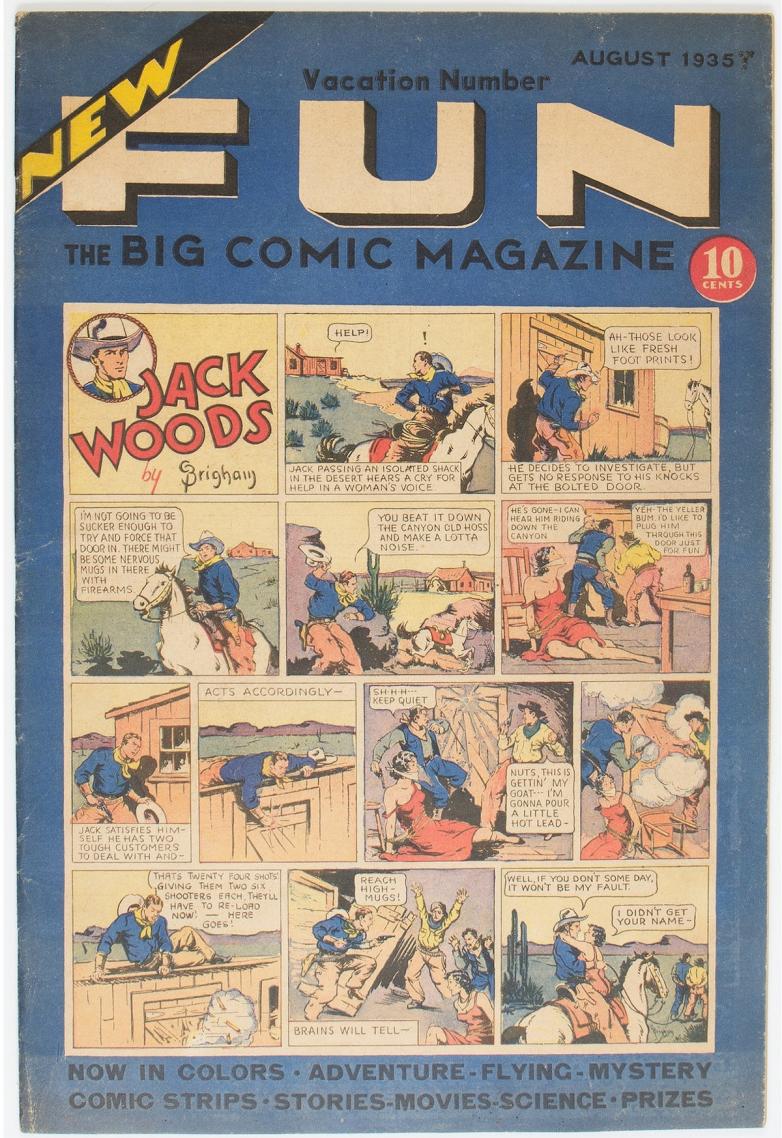 New Fun No. 5, in FN/VF condition, is a hard-to-come-by early-days landmark.

Dallas —  First issues of milestone titles. Debut appearances of beloved and immortal superheroes. And a comic book from the days before there were such things.

There are more than 1,300 lots in Heritage Auctions’ Comics & Comic Art event, which takes place July 9-12 at our world headquarters in Dallas and online. But the expanse of historic issues alone feels almost endless.

For this supersized event, it’s best to begin at the beginning: a DC Comics title pre-dating the first appearance of Superman by three years – the very birthplace of the Golden Age.

New Fun No. 5, in FN/VF condition, is a hard-to-come-by early-days landmark – the fifth issue of the first title that collected all-new stories featuring characters created specifically for a single title. The handiwork of pulp writer and U.S. Army Major Malcolm Wheeler-Nicholson, founder of DC’s predecessor National Allied Publications, New Fun was oversized and overstuffed with stories, among them the ongoing adventures of Texas Ranger Jack Wood, the first recurring hero in the comics company’s stable.

This copy of self-proclaimed Big Comic Magazine is notable for countless reasons, among them its condition – 85 years old yet its pages show only light wear. Wheeler-Nicholson also edited and wrote several stories for this issue, the title’s penultimate before changing its name to More Fun in the winter of ’36. It’s also the last issue of New Fun that appeared on stands without contributions from two promising young creators named Jerry Siegel and Joe Shuster. Speaking of …

Superman No. 1, the first title ever devoted to a single superhero, is going to be the centerpiece of any comics auction in which it appears – and this sale has three issues, among them a CGC VG/FN 5.0 that’s one of the 10 best copies of the title CGC has ever certified. It featuring the first four Man of Steel stories Siegel and Shuster contributed to Action Comics, as well as a new origin story and four previously unpublished pages.

The other half of the World’s Finest team is well represented in this auction with several highly coveted issues, chief among them a VG/FN 5.0 copy of Batman No. 1, published in 1940 after the Dark Knight’s initial swing through Detective Comics. Eighty years after publication, this No. 1 holds up as one of the greatest Batman issues ever published. It’s as grim and gritty as any modern-day offering. And, this issue contains the first appearances of The Joker and Catwoman, known then only as The Cat.

Rounding out DC’s Trinity, of course, is Wonder Woman, whose earliest breakthrough moments are represented in this auction. There’s her very first appearance in 1942 (All-Star Comics No. 8, CGC VG/FN 5.0 issue), her first cover (1942’s Sensation Comics No. 1, CGC GD/VG 3.0) and the first issue of her eponymous title bowing in 1942 (Wonder Woman No. 1, one of the finest copies ever brought to auction).

There are other issues of All-Star Comics in the summer sale, among them one of the most important copies (and covers) in the medium’s history, All-Star No. 3 (CGC VG 4.0), containing the first meeting of the Justice Society of America. The gold standard for DC’s Golden Age starring Green Lantern, Flash, the Spectre, Doctor Fate, Hourman, Sandman and the Atom.

The JSA’s successors, the Justice League of America, made their debut 20 years later in The Brave and the Bold No. 28. Wonder Woman, Aquaman, Green Lantern, Flash and Martian Manhunter team up in a Silver Age spectacular represented here with an extraordinary CGC VF/NM 9.0 copy.

For those collectors who make theirs Marvel, the summer event features no shortage of major milestones – beginning, appropriately, with the comic book that introduced readers to The Marvel Age: Fantastic Four No. 1 (CGC Qualified VF+ 8.5), published in 1961 and the comic whose art, characters and tone defined the company for generations.

“I was really interested in the characters as people,” artist Jack Kirby once said of his first co-creations with Stan Lee. “I have a genuine feeling for real people, and what I do is recreate them in a fantastic formula.”

Which, shortened, became the Fantastic Four: Reed Richards, Sue and Johnny Storm and Ben Grimm, the first family of the new Marvel Comics.

Then there is the first Avenger himself, Captain America.

Captain America Comics No. 1 (CGC VG- 3.5), published in 1941 by Marvel’s predecessor, Timely Comics, is among the most coveted titles in comicdom for good reason: the iconic Jack Kirby-Joe Simon cover featuring Cap punching out Hitler, the introduction of Steve Rogers’ star-spangled super-soldier and sidekick Bucky, the first appearance of the Red Skull. It is the torchbearer for a Golden Age.

But as Heritage Auctions’ Vice President Barry Sandoval points out, “You could almost fill out an Avengers lineup here,” given the copious Marvel Age titles in the summer sale.

There’s the first appearance of Iron Man found in Tales of Suspense No. 39 from 1962 – represented here by three copies, including one so highly graded (a CGC NM 9.4) that there are only a handful of copies in existence in better condition. Like all iconic Marvel pieces, it bears a Kirby cover (and Don Heck interior), as he designed the first suit of armor. A prized piece worthy of Tony Stark’s collection.

You’ll find, too, The Incredible Hulk No. 1, also from 1962 – the debut of the man or monster (or both!) created by Kirby and Stan Lee, when Bruce Banner’s alter-ego was still a pale shade of gray. Another Kirby classic, represented here with an issue in graded CGC FN/VF 7.0.

The Mighty Thor wielded his Mjölnir for the first time in 1962’s Journey Into Mystery No. 83, one of the most sought-after Silver Age offerings long before he turned into a movie star. Two issues are available in the summer event, including one graded CGC VF 8.0.

That same year, 1962, saw the first appearance of Hank Pym in Tales to Astonish No. 27 – back when the Ant-Man didn’t have his costume and was known only as “The Man in the Ant Hill.” It wasn’t the most successful launch in Marvel’s history, and for a bit Ant-Man was rechristened Giant-Man – maybe bigger would be better. Yet this title ranks No. 11 on Overstreet's list of Top 50 Silver Age Comics – proof that from small things, big things one day come.

A year after Thor’s bow, Marvel published one of the most popular (and, thanks to co-creator Steve Ditko’s artwork, beautiful) comics of all time: The Amazing Spider-Man No. 1 (CGC VF+ 8.5), the Web-Slinger’s first standalone title following his introduction in Amazing Fantasy No. 15. Five icons for the price of one: Spidey and the Fantastic Four, on one of the most reproduced and replicated covers of all time.

Earth’s Mightiest Heroes are here, too: Iron Man, Hulk, Thor, Ant-Man and Wasp in The Avengers No. 1 (CGC FN+ 6.5), published in 1963. First, a comic book; not yet the launching pad for the most successful movie franchise ever created.