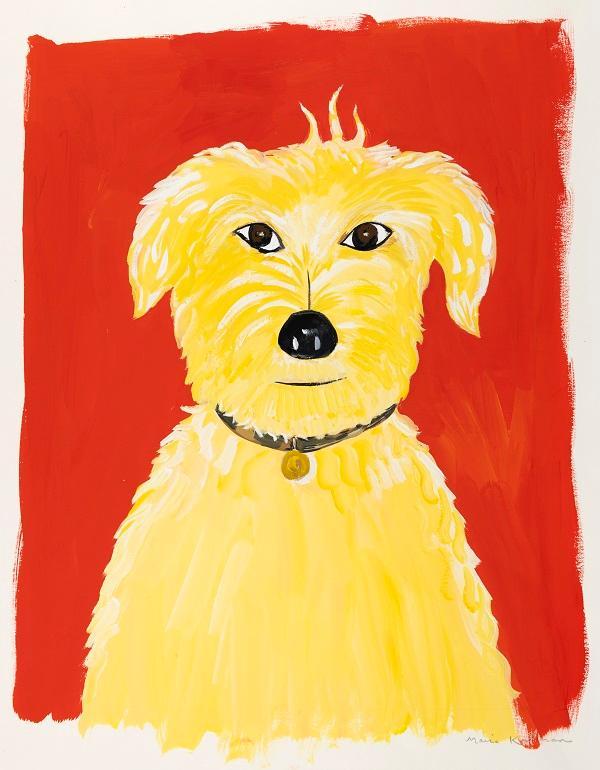 Amherst, MA — The Eric Carle Museum of Picture Book Art is pleased to present The Pursuit of Everything: Maira Kalman's Books for Children, a colorful panorama of Kalman's picture book career, on view November 10, 2019 through April 5, 2020. The exhibition premiered at the High Museum of Art in Atlanta, GA in June 2019.

Perhaps best known for her humorous New Yorker covers and her brilliant pictorial essays for The New York Times, Kalman has also published 18 acclaimed children's books (plus a dozen for adults). She illustrates the comic adventures of Max Stravinsky, the dog-poet in Max Makes a Million (1990), and the escapades of a gluttonous canine named Pete in What Pete Ate (2001). The exhibition features Next Stop Grand Central (1999) alongside illustrations from her recent publications Beloved Dog (2015) and Cake (2018). Kalman addresses important historical figures and events in Looking at Lincoln (2012), Bold & Brave: Ten Heroes Who Won Women the Right to Vote (2018), and the 9/11-inspired Fireboat: The Heroic Adventures of the John J. Harvey (2002). Balancing the ridiculous and the profound, Kalman's vibrant gouache paintings and witty word play delight audiences of all ages.

With an idiosyncratic style all her own, Kalman employs compressed space, unpredictable pacing, and often shocking colors to keep readers on their toes. Her first children's book was Stay Up Late (1987), in which she gave visual form to a famous Talking Heads song. She's collaborated with other writers, including U.S. Senator Kirsten Gillibrand on Bold & Brave: Ten Heroes Who Won Women the Right to Vote (2018), food writer Barbara Scott-Goodman for Cake (2018), and children's book author Lemony Snicket on 13 Words (2010). Paintings from all three books are represented in the exhibition. Kalman also loves dogs and explains her fascination with them in Beloved Dog (2015). (Viewers who look closely will find dogs amongst the array of characters in her books.)

Kalman says of her wide-ranging work, "The best children's books are as appealing to adults as they are to children. There have to be different levels of humor, different levels of reference, which allow a dialogue between adults and children. If you live with children, the kinds of conversations you have during the day range from the surreal to the mundane to the insane to the pedantic. And that language can be duplicated in writing because the world is all of those things."

In addition to Kalman's original picture-book art, the exhibition presents personal glimpses of the artist's family and her inspirations. On view is a humorous video--featuring a piano-teaching chicken--made expressly for the exhibition by her son Alex Kalman. The gallery entryway is a tableau vivant of Kalman's New York City studio. From shoes to family photos, postcards and musical instruments, she lays out hundreds of meaningful images and objects, many of which can be found in her paintings. Other personal items include sketchbooks, illustrated correspondence with her two-year-old granddaughter, Olive, and ephemera such as a collection of crazily-named candy bars. Visitors to the exhibition are invited to "decorate" cakes, design hats for Max Stravinsky, take a scavenger hunt through Kalman's colossal Grand Central Terminal mural, and playfully add items to Pete's stomach on a magnetic board.

"It is such a wonderful thing to meet a gifted illustrator or a talented writer, and Maira happens to be both," said Jane Bayard Curley, the exhibition's curator. "She is just like her work: funny, smart, and an undisputed champion for the universal appeal of the picture book. Her highly personal and somewhat eccentric worldview appeals to anyone who wants to be verbally and visually amused and challenged."