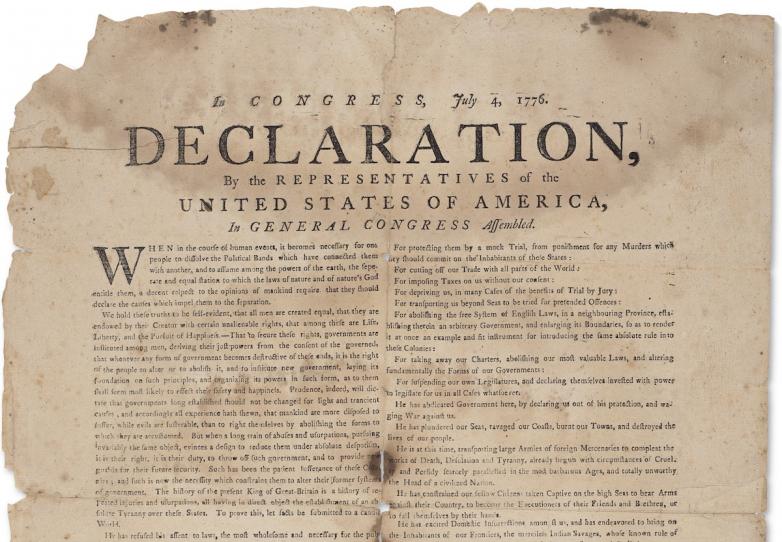 New York — Christie’s week of Americana sales totaled $9,202,500 and established five auction records. A rare contemporary 1776 broadside edition of the Declaration of Independence from the Collection of Ambassador J. William Middendorf II sold for $990,000, achieving the top price across the series of sales.

“What an extraordinary week during extraordinary times,” said John Hays, Deputy Chairman, Christie’s America. “Record prices were paid in every category sold this week—most notably the portrait of George Washington, by James Sharples and a contemporary broadside of the Declaration of Independence. This auction demonstrates the continued strong interest Americans have in their art and culture—from Native American basketry, silver, furniture and Outsider Art. It was an honor for Christie’s to represent the owners of these remarkable pieces offered in the auction.”

The sale was led by the rare contemporary 1776 broadside edition of the Declaration of Independence from the Collection of Ambassador J. William Middendorf II which sold for $990,000, above its estimate of $600,000-800,000. Auction records were established for two works from the Middendorf Collection; a fine copy of Paul Revere’s iconic engraving of the Boston Massacre which totaled $412,500, and a portrait of George Washington by James Sharples, which sold for $325,000, exceeding its estimate of $50,000-70,000.

A Newport card table made by John Townsend totaled $250,000 and the selection of silver was led by a set of twelve American 18- karat gold after dinner coffee cups, saucers, and spoons by Tiffany which sold for $110,000. Srong prices were achieved for Folk Art including a Washoe basket by Dat So La Lee sold for $237,500 above its estimate of $40,000-60,000, and a carved white marble recumbent lion from the Siegmund Collection, which totaled $50,000.

Peter Klarnet, Senior Specialist, Americana, Books and Manuscripts, comments: “We were extremely honored for the opportunity to offer highlights from Ambassador Middendorf’s collection – and the sale’s results confirm the continued strong interest in important pieces of printed Americana.”

Cara Zimmerman, Head of Sale, Outsider Art, comments: “Phone and internet bidding enabled buyers and bidders from around the globe to set exceptional prices and make the sale a great success. Art institutions, first-time bidders and established collectors all participated; Outsider Art has never had a broader audience.”

The online sale of Chinese Export Art Featuring Property from the Tibor Collection totaled $1,128,750 and sold 99% by value, led by A Rare Pair of Goose Tureens and Covers, which sold for $150,000. Additional top lots of the sale include A Rare Ox-head Tureen and Cover, which achieved $52,500 and A Pair of Famille Rose Roosters, which realized $52,500.

Carleigh Queenth, Head of Sale, Chinese Export Art, comments: “Today’s sale was a testament to the vitality of the Chinese Export market. Porcelain designed by Cornelis Pronk, mugs from the Eckenhoff Collection and fabulous figures from the Tibor Collection all had strong results. The bidding was particularly spirited for a number of birds in the sale, including a pair of famille rose roosters, a rooster tureen cover and a pair of hawk boxes and covers.”