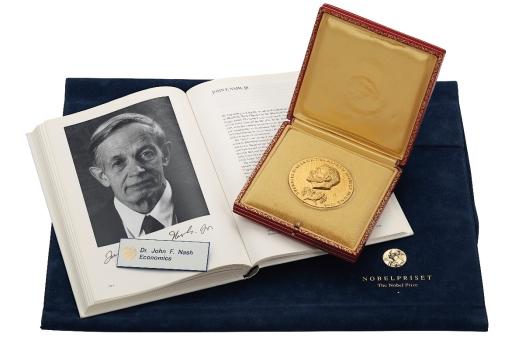 New York – Christie’s is pleased to announce the 25 October sale of the 1994 Nobel Prize in Economic Sciences awarded to John Forbes Nash, Jr. for his contributions to Game Theory (estimate: $500,000–800,000). The prize is housed in its original red morocco gilt case lettered “J.F. Nash” and comes with the Nobel Prize Diploma in its tan morocco gilt portfolio and original suede-lined blue cloth clamshell box.

Additionally, handwritten documents from Nash will be sold and include a c.1940s Bluefield, West Virginia high school trigonometry paper (estimate: $800–1,200) replete with encouraging words from Nash’s teacher, which the mathematician retained for the rest of his life. On the lined paper, the teacher writes to the nascent thinker: “I think you will really go places if you would only organize your work — otherwise your talent will be wasted.” On the verso he continues, “Remember: Your work is only useful insofar as it may be of use to other people.”

Other documents being offered include a group of rare 1950s offprints from Nash’s personal library — two of them annotated — illustrating his first great contributions to Game Theory (estimate: $2,500 – 3,500), a first edition of Nash’s 1951 doctoral thesis (estimate: $3,000 – 5,000), and a handwritten lecture on the history of Game Theory Nash gave at Princeton University in the 2000s (estimate: $2,000 – 3,000). Each of the lots in the group will be sold to benefit The National Alliance on Mental Illness. Nash was known for his decades-long battle with schizophrenia.

Christie’s will also be offering the 1994 Nobel Prize in Economic Sciences awarded to Reinhard Selten for refining Nash’s work (estimate: $200,000 – 300,000). A portion of proceeds from the sale of this lot will be donated to the California Institute of Technology.