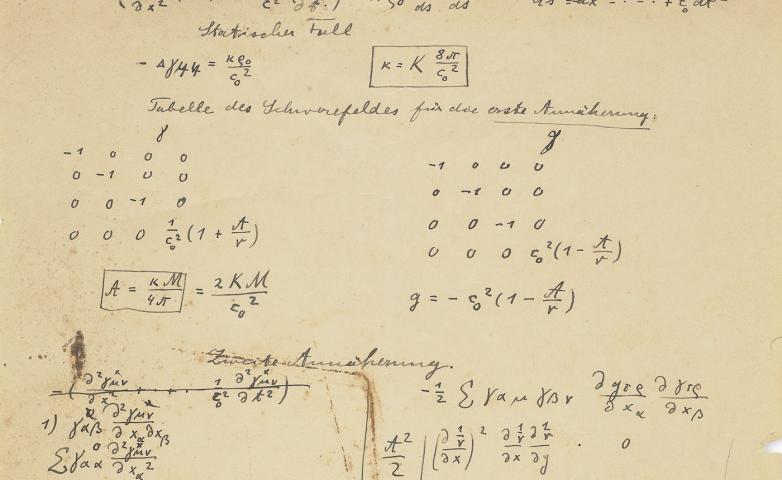 A 54-page autograph manuscript written by Albert Einstein and Michele Besso will be offered at auction in November.

Paris — Christie's is delighted to welcome Aguttes* to its Exceptional Sale on 23rd November, which will offer collectors an exceptional document : a 54-page autograph manuscript written by Albert Einstein and Michele Besso between June 1913 and early 1914.

This manuscript documents a crucial stage in the development of the theory of the theory of general relativity, which reshaped modern understanding of how the universe works. As such, it is without doubt the most valuable Einstein manuscript ever offered at auction (estimate: €2,000,000-3,000,000).

Adrien Legendre, Director of the Books and Manuscripts department, commented: "We are delighted that Christie's will be able to promote this extraordinary manuscript to its international network of collectors for our Exceptional Sale. Einstein's autographs from this period, and more generally from before 1919, are extremely rare. As one of only two surviving manuscripts documenting the genesis of the General Theory (along with the so-called Zurich notebook from late 1912/early 1913 - now in the Einstein Archive at the Hebrew University in Jerusalem), it provides a remarkable insight into Einstein's work and a fascinating dive into the mind of the greatest scientist of the 20th century.

The manuscript is also a particularly valuable record of Einstein's relationship with Michele Besso, the Swiss engineer who was his collaborator, confidant, and lifelong friend.

As early as 1912, Einstein was working on generalizing his special relativity theory, published in 1905. A first draft, which favoured a methodology based on the principles of physics rather than mathematics, was published the same year. It remained to put this theory to the test, and it was then that Michele Besso entered the scene, joining Einstein in Zurich in early 1913. The two friends and colleagues tackled one of the problems that the scientific community had been struggling with for decades: the anomaly in the orbit of the planet Mercury. Mercury's perihelion, the point in its orbit closest to the Sun, shifts slowly over time due to the effects of other bodies in the solar system. An infinitesimal discrepancy exists between Newton's equations and what was observed, but no one has been able to provide an irrefutable explanation. For Einstein and Besso, if their equations gave the result of the observed shift, the theory would be proven.

The calculations of the Einstein-Besso manuscript were, however, frustrated by a number of unnoticed errors, and later in 1913 Einstein set aside this approach to general relativity out of concerns over its theoretical consistency. Besso left Zurich, taking the document with him. It is thanks to him that the manuscript has, almost miraculously, come down to us: Einstein would probably not have bothered to keep what he saw as a working document.

In September 1915, Einstein returned to his earlier approach, and at last established the valid field equations for his new theory. He refined and published these in a legendary series of four articles in November 1915, in the third of which he demonstrated that his new theory could indeed account for the anomalous perihelion of Mercury, thus fulfilling the promise of the Einstein-Besso manuscript of two years earlier. The human understanding of the workings of the universe had been changed forever.