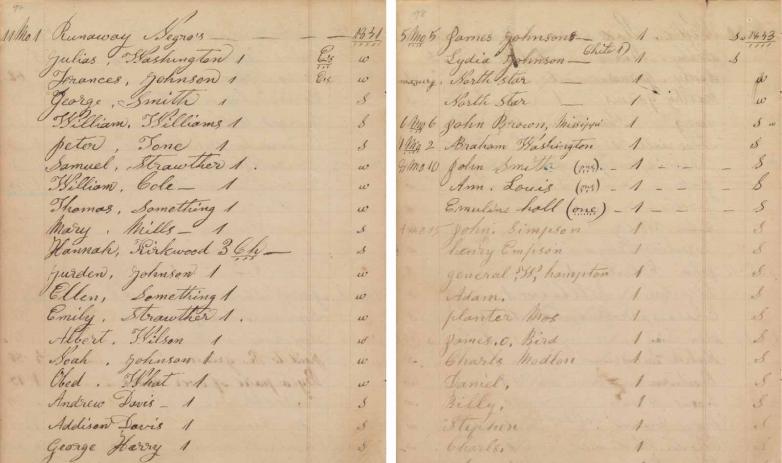 Born a Quaker in North Carolina, Zachariah Taylor Shugart (1805-1881) spent most of his life in the Midwest, by way of Indiana, Michigan, and Iowa, according to Rick Stattler, director of the Books and Manuscripts department at Swann Galleries. A known and active participant in the Underground Railroad and abolitionist causes, it is reported that Shugart led more than 1,500 escaped slaves through Cass County, Michigan, and into Canada, with a fine team of horses and wearing a signature white hat.

During his lifetime, Shugart kept a number of diaries and ledgers which detail his work on the Underground Railroad, many of which list the names of individuals and families who traveled through his train. Sixty-three of those documents—which have an estimated collective value of $30,000 to $40,000—will be available together as one lot at Swann Galleries’ upcoming Printed and Manuscript Americana sale, to be held September 26 in New York.

The central item in this lot is a 105-page account book kept by Shugart from 1838 to 1852, which details most of his involvement. In addition, the lot features various other family papers, including a letter written to Shugart from his son Joseph—then a soldier in the Union army—in 1864, two days prior to the Battle of Cedar Creek, where he was fatally wounded. Enclosed with the letter is a swatch of fabric described as “a piece of our old banner.”

“Taken as a whole, we don’t know of any other Underground Railroad documents at auction that have approached the extent or detail of Shugart’s account book,” Stattler says. “Offered in the context of his other personal papers, its authenticity and power are beyond question.”

In addition, Swann’s Americana sale will feature a lot containing four boxes—more than 2,000 pages—of correspondence, memorandum books, receipts, ledgers, legal records, and printed ephemera dated from 1801 to 1908 and detailing the business dealings of the Dickinson and Shrewsbury salt works in West Virginia. Notably, one of the boxes contains eighteen folders of records relating to enslaved workers, and multiple mentions of Washington Ferguson, who was Booker T. Washington’s stepfather.

“This substantial archive of the salt works’ records is important in three ways,” Stattler says. “First, for its thorough documentation of a large industrial enterprise in a time, place, and industry that is rarely studied. Second, for the thousands of documents relating to enslaved people who operated the company’s furnaces and wagons. And third, for the plant’s numerous connections to Booker T. Washington, who lived near the salt works after abolition.”

Perhaps most remarkable, according to Stattler, is a letter sent by “yo slave boy John Hand”—written on his own behalf and sent to William Dickinson, one of the plant owners, circa 1840.

“Sold piece by piece, hundreds of these items would be worthy of individual sale,” Stattler says. “If kept together, several books and dissertations remain to be written from this evocative material.” The lot is estimated between $80,000 to $120,000.