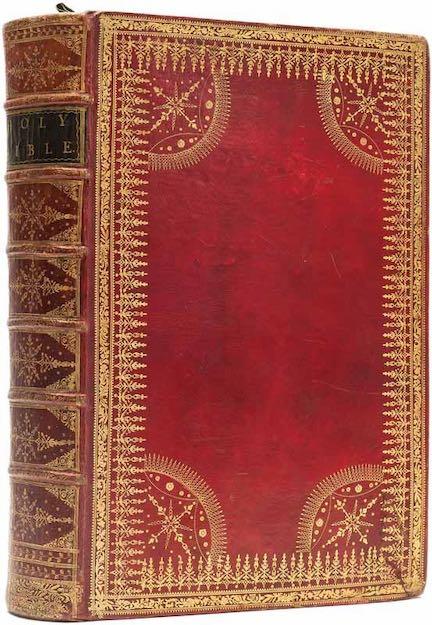 Last month, the University of Birmingham in Birmingham, UK, launched a campaign to save the Boulton Baskerville Bible. This was in direct response to the forthcoming March 26 auction at Forum Auctions in London of fine books, manuscripts, and works on paper from the library of the Birmingham Assay Office Library, which includes a Bible that belonged to Matthew Boulton, a renowned Birmingham silversmith best known for his role in helping invent the Boulton & Watt steam engine.

The Bible was printed in 1763 by Birmingham’s famous printer, John Baskerville — he of the namesake font — and is valued at £4,000-£6,000 ($5,200-7,800). As Rupert Powell, deputy chairman and international head of books at Forum Auctions, told us recently, “You might be attracted to the Bible because it belonged to Boulton, or because you collect Bibles, or because you collect books in general—this is a superbly-bound copy of Baskerville’s great folio Bible, with a very attractive red morocco binding.”

News of the auction caught the attention of Malcolm Dick and Caroline Archer-Parré at the University of Birmingham, who contacted a consortium of local organizations and set up an online pledge form, intending to raise the necessary funds to acquire the volume. “We feel very strongly that the bible should remain in its ancestral home and made publicly available,” their statement reads.

Earlier this week Malcolm Dick said, “The numbers have exceeded our expectations and we have had pledges from individuals and organizations, in Birmingham, the UK, and the rest of the world.”

As of today, Forum has withdrawn the Bible from auction, leaving us to wonder if a private sale had been arranged, but no comment from the fundraising campaign organizers was offered.