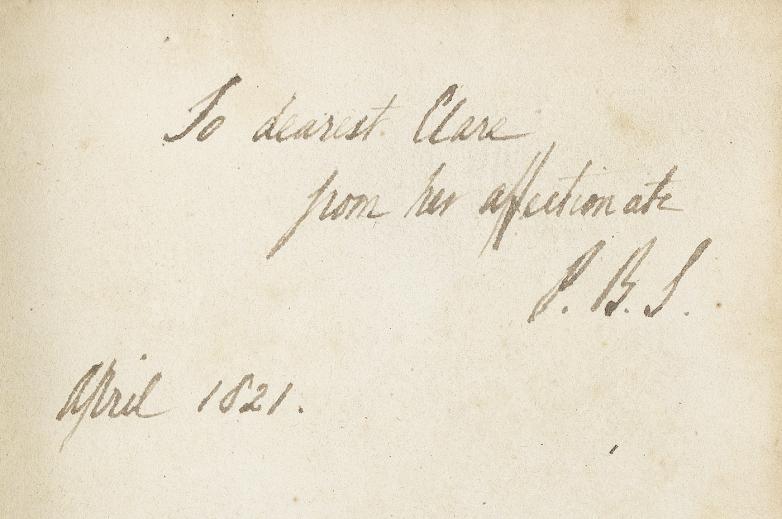 London – The 19th century poet Percy Bysshe Shelley (1792-1822) didn’t just preach free love, communal living and the rights of women – he also walked the talk. Expelled from Oxford for atheism, Shelley eloped in 1810 with Harriet Westbrook, a 16-year-old schoolgirl. A baby, and unhappy marriage (in that order) later, he eloped again – in 1814 – with another 16-year-old, Mary Godwin whose half-sister Claire Clairmont went with them. It wasn’t long before Shelley and Claire were having an affair as too, and in the spirit of female emancipation, so was Mary. This entanglement comes together in a book to be offered at Bonhams Fine Books and Manuscripts in London on Wednesday 23 March. Poesie Toscane by Vincenzo da Filicaja is inscribed by Shelley to Clairmont, ‘To dearest Clare from her affectionate P.B.S. April 1821’. It is one of only nine books known to carry a presentation inscription from the poet, six of which are in public institutions, and is estimated at £60,000-80,000.

Vincenzo da Filicaja (1642-1707) was a lyric poet, beloved by Shelley and his circle. Poesie toscane. Aggiunto il di lui Carteggio relativo alle sudette poesie consists of two volumes and was published in Venice in 1812. It is based on an earlier edition of 1707 and incorporates letters from the poet commenting on his work.

Matthew Haley, Bonhams Head of Books and Manuscripts, said: “This is an extremely rare item. Shelley hardly ever signed books – we have only been able to trace nine books with his inscriptions – and it isn’t clear why he made an exception with Poesie Toscane. We do know that he greatly admired da Filicaja and the gift may also have had some personal significance for Shelley and Clara. A little over a year later, their story ended with Shelley’s death by drowning off the coast of Sardinia in July 1822. Claire lived to be 80, dying in Florence in 1879.”

Shelley, Mary and Claire had left England in 1818 to travel in Italy. Two years earlier, Claire had introduced them to Lord Byron and they had struck up a friendship. Claire had been in relentless pursuit of the uncharacteristically reluctant Byron, who eventually succumbed and fathered a child by her, Allegra. He refused to have anything more to do with the mother, but under duress agreed to raise the child.

Clairmont and the Shelleys’ time in Italy was characterised by ill health, depression, and bouts of hallucinations on Shelley’s part. Shelley fathered a daughter by an unknown woman – rumoured to be Claire – falsely registering Mary as the mother, and conducted at least two passionate affairs. Not surprisingly perhaps, Mary grew to distrust Claire, who left the Shelley household to live in Florence. She and Shelley continued to meet discreetly, however, and it is likely to have been at one of these clandestine rendezvous that Shelley made her a gift of Poesie Toscane.

The volume was once in the collection of William Francis Spencer Ponsonby, 1st Baron De Mauley (1787-1855), whose arms and initials are on the covers. Ponsonby's sister, the novelist Lady Caroline Lamb, was yet another of Byron’s lovers and famously described him as "mad, bad, and dangerous to know.”