A celebration of maps and the stories they tell gets underway at Oxford’s Bodleian Libraries next week. Talking Maps showcases the Bodleian’s world-renowned collection of maps, from the first modern map of Britain (late fourteenth century) to Tolkien’s maps of Middle-earth to contemporary artist Grayson Perry’s Red Carpet (2017).

“Every map tells a story,” commented Jerry Brotton, who, with map librarian Nick Millea, co-curated the exhibition. “The exhibition shows how maps are creative objects that establish conversations between the people who made them and the individuals and communities that use them.” 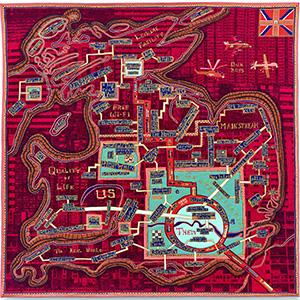 Perry’s tapestry, Red Carpet, for example was designed to express the state of the UK following the Brexit vote.

“Talking Maps highlights the diverse and surprising role of maps through the ages, from guides to the afterlife and windows into alternative worlds to tools that have been used to manage land, nations and empires,” said Millea. Among those featured in the exhibition are: The Selden Map, a late Ming map of the South China Sea, which is the first known Chinese-made map to enter England, rediscovered at the Bodleian in 2008; a D-Day landing map from World War II; and specially-commissioned 3D installations that recreate a famous lost world map by the twelfth-century Muslim geographer al-Sharif al-Idrīsī.

A related event, “The Gough Map of Great Britain: Can a 600-year-old map reveal any new secrets?” will be held on July 31, and an accompanying hardcover catalogue will soon be available for those who can’t make it to Oxford before the exhibition closes on March 8, 2020.