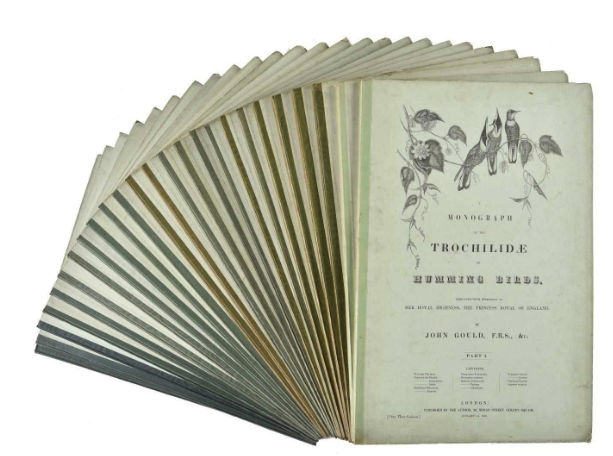 A set of the original parts of John Gould's Monograph of the Trochilidae, offered at Dominic Winter Auctioneers this week.

On Wednesday, November 6, Dominic Winter Auctioneers sells Printed Books, Maps & Prints. This sale includes the second part of the sale of books from the Ladwell Collection of Fine Bird Books, and the top lot is expected to be a complete set of the twenty-five original parts of John Gould's Monograph of the Trochilidae (1849–1861), estimated at £40,000–60,000.

Also on Wednesday, Fine Books and Manuscripts, Including Americana at Hindman Auctions, in 480 lots. A copy of the second issue of Bernard Ratzer's four-sheet map of New York City (1776) rates the top estimate, at $80,000–120,000. There is a lovely copy of the Kelmscott Press publication Some German Woodcuts of the Fifteenth Century, one of eight copies printed on vellum and in a variant binding of dark green limp vellum. Once owned by William Morris' secretary Sydney Cockerall, this copy is estimated at $20,000–30,000.

The Christie's online sale On the Shoulders of Giants: A Brief History of Big Ideas ends on Thursday, November 7. The 58 lots include a 1928 Einstein letter to the Polish-German mathematician Hermann Müntz (£25,000–35,000) and a 1968 Stephen Hawking letter to childhood friend Bill Cleghorn (£15,000–25,000). Many more items for the Einstein collector, too.

PBA Galleries sells Art & Illustration – Fine Books on Thursday, in 426 lots. A mixed set of eight volumes from Justin Friedrich Bertuch's Bilderbuchs is estimated at $7,000–10,000. A rebacked first edition of Baum's Wonderful Wizard of Oz could sell for $4,000–6,000; the same estimate has been given to signed editions of Winnie-the-Pooh and The House at Pooh Corner. Lots 350–426 are being sold without reserve.