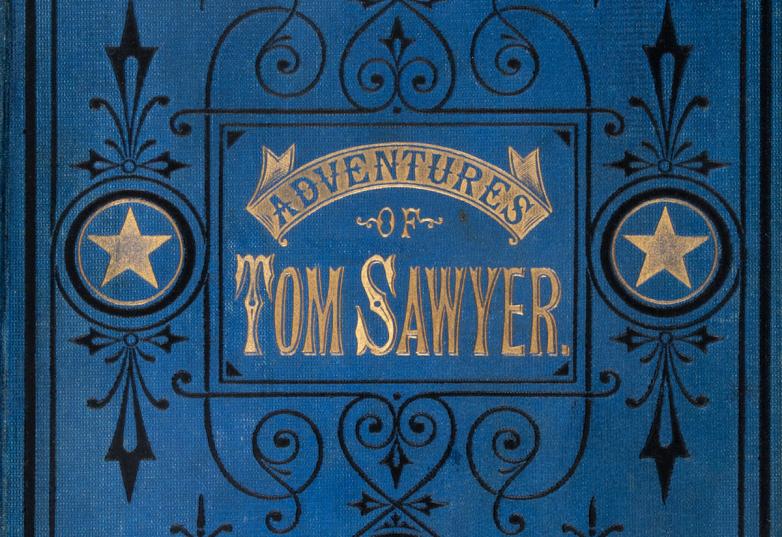 A first edition of Mark Twain's The Adventures of Tom Sawyer (1876) rates the top estimate at Hindman on May 3.

A busy week ahead in the salerooms; here's the rundown.

On Tuesday, May 3, at Hindman, The Library of Jack Charles Davis, in 424 lots. This collection is being sold to fund community-based charitable giving in the Lansing, Michigan area. A first edition of Mark Twain's The Adventures of Tom Sawyer (1876) rates the top estimate at $15,000–20,000, while a copy of the first American edition of Ernest Hemingway's In Our Time (1925) from the library of Hemingway's literary agent Curtis Brown could sell for $10,000–15,000.

At Artcurial on Wednesday, May 4, the third part of the Maurice Houdayer Library, in 401 lots.

Hindman sells 313 lots of Fine Printed Books & Manuscripts, Including America on Wednesday. A first edition of the first printed treatise on architecture, Leon Battista Alberti's De re aedificatoria (Florence, 1485) with spurious annotations in the style of Leonardo da Vinci is estimated at $80,000–120,000. A number of Audubon bird plates will be offered, along with a full copy of the Johnson Reprint Co. & Theatrum Orbis Terrarum (Amsterdam) reprint edition of the Birds of America (1971–72), which is estimated at $15,000–20,000. A State 10 copy of John Smith's ca.1625 map of Virginia rates the same estimate.

On Wednesday at Freeman's, Books and Manuscripts, in 75 lots. A contemporary manuscript letterbook documenting the peace negotiations at the end of the American Revolution rates the top estimate of $50,000–80,000. A secretarial copy of a Continental Congress resolution from June 1776 defining treason, signed by Charles Thomson, could sell for $15,000–25,000. A copy of the facsimile Declaration of Independence produced for Peter Force's American Archives is expected to sell for $12,000–18,000.

At University Archives on Wednesday, 399 lots of Rare Books, Autographs, Manuscripts & Photos. A large collection of material from the collection of architect Addison Mizner, developer of the Palm Beach & Boca Raton, Florida area, including 186 manuscript pages of his autobiography, advertising materials related to his development business, books from his library, clothing, and more, is expected to sell for as much as $150,000–200,000. An April 1951 Einstein letter in English to science fiction writer Sam Moskowitz about the speed of light and the theory of relativity is expected to fetch $80,000–100,000. An illustrated journal of English explorer Albert Markham's 1877–78 tour through the American west could sell for $50,000–60,000.

At Forum Auctions on Thursday, 270 lots of Books and Works on Paper.