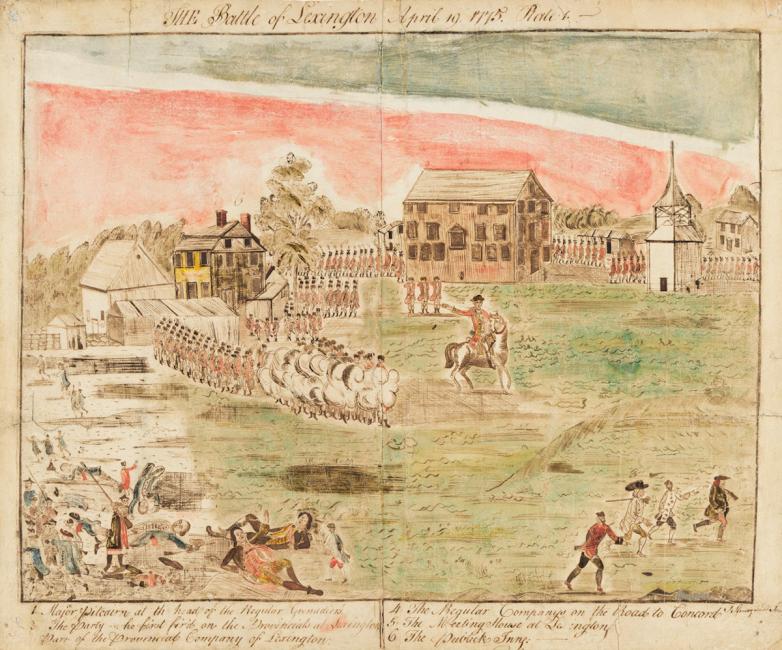 Watercolor of the Battle of Lexington by 14-year-old St. John Honeywood, offered at Swann Galleries this week.

At Forum Auctions on Thursday, September 30, 514 lots of Fine Books, Manuscripts and Works on Paper. Scottish photographer John Thomson's four-volume Illustrations of China and Its People (1873–74) rates the top estimate at £15,000–20,000. The first collected edition of Milton's poetry, Poems of Mr. John Milton (1645), could sell for £12,000–18,000; the same estimate has been assigned to a copy of Ian Fleming's Casino Royale in an unrestored dust jacket. An Aleister Crowley charcoal sketch of the Tyrrhenian Sea is estimated at £10,000–15,000.

On Thursday at Swann Galleries, 349 lots of Printed & Manuscript Americana. A complete set of the works of Sor Juana Inés de la Cruz, formerly in the collection of José Gallart Folch, is estimated at $80,000–120,000. A set of four watercolors of scenes from the battles of Lexington and Concord painted by 14-year-old St. John Honeywood based on Amos Doolittle's engravings, could sell for $50,000–75,000. A first edition Book of Mormon is estimated at the same range.

Rounding out the week, Miniature Books with Books to Benefit the Miniature Book Society on Thursday at PBA Galleries. The 132 lots include several of Barbara Raheb's handcolored copies from her Pennyweight Press editions, including Saint George and the Dragon, Mythical Creatures, and The Haunted House. Quite a few other Raheb editions are also included.