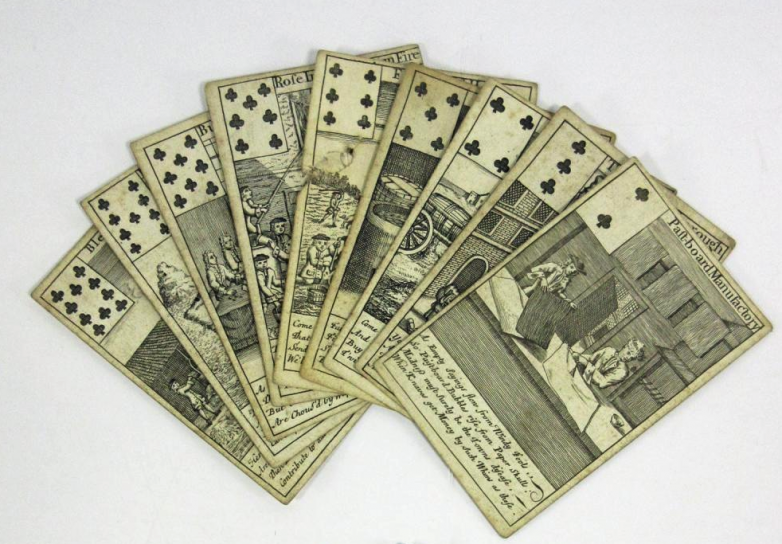 Selection from the set of South Sea Bubble playing cards (1720) offered at University Archives this week.

There are five sales I'll be watching this week, beginning with: Fonsie Mealy Auctioneers holds their Collectors' Sale on Wednesday, March 3. The 673 lots include a complete set of 73 issues of the Irish Civil War newspaper Sgeala Chatha Luimnighe (Limerick War News) (July–October 1922), estimated at €5,000–7,000. A copy of the 1990 Luzerne deluxe fascimile of the Book of Kells could fetch €5,000–6,000, and a first deluxe edition of Harry Potter and the Philosopher's Stone, signed by Rowling, is estimated at €4,000–5,000.

Forum Auctions sells Books and Works on Paper on Thursday, March 4, in 286 lots. The usual miscellany here, with most estimates in the low-three-figure range. A number of potentially interesting shelf lots to keep an eye on here.

At PBA Galleries on Thursday, Fine Art, Photography & Prints. The 227 lots include a number of Leonard Baskin/Gehenna Press items: these include Ted Hughes' Capriccio (1990) with illustrations by Baskin and bound by Gray Parrot (this being No. 47 of 50), estimated at $12,000–18,000. Eric Korn's Lepidoptera Fantastica (1994), one of the ten deluxe copies with a second suite of Baskin's etchings, an original drawing, and an engraved copper plate, could sell for $10,000–15,000. At the same estimate is one of the ten deluxe copies of The Gehenna Florilegium (1998), with a leaf from Anthony Hecht's manuscript, three original Baskin drawings, and a woodblock.

On Saturday, March 6 at Kolbe & Fanning, the Richard Margolis International Numismatic Library, in 539 lots. Among the key lots are a collection of 71 publications of the French government on the monetary system from the Revolution through the Napoleonic period, and forty-one volumes of bound research materials relating to Matthew Boulton and the Soho Mint. A copy of La Collection de Monnaies et Medailles de M. Carlos de Beistegui (1933–34) is also to be had.