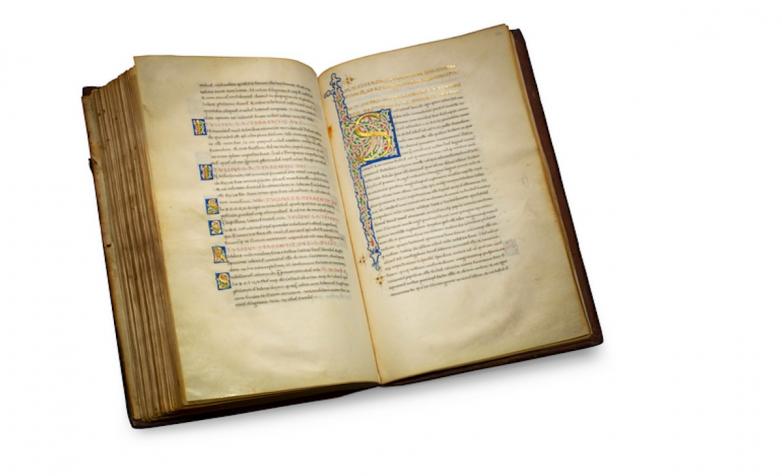 A 1442 illuminated Cicero manuscript, offered at Christie's this week.

A busy week coming up in the salerooms!

One lot will be of particular interest to us at the Classic Art Evening Sale at Christie's London Wednesday: the prayerbook of Mary, Queen of Scots. Illuminated by the Master of François de Rohan for Louise de Bourbon-Vendôme, Abbess of Fontevraud after 1534, and given by Louise to her grand-niece Mary Stuart, Queen of Scots during her marriage to Francis II of France, the book later passed to the Hale family of Gloucestershire and was rebound by Edwards of Halifax. It is estimated at £250,000–350,000.

Christie's Valuable Books & Manuscripts sale ends on Thursday, July 30. The 201 lots include a 1442 manuscript of Cicero's Epistolae ad Familiaries, copied by Domenico Cassio de Narnia (the only manuscript signed by him) and illuminated by Joacchinus Gigantibus of Rothemburg. This production was commissioned by Angelus da Spoleto, and stayed in Italy until it was sold to Sir Thomas Phillipps in 1860. Sir Sidney Cockerell purchased the manuscript from Quaritch in 1945, and even later it was owned by bookseller William Foyle. This week it could fetch £180,000–250,000. Also on offer is a late 11th-century Byzantine gospel lectionary in Greek, which also bears a 16th-century inscription in Slavonic. It was sold at Sotheby's in 1870 (also to Sir Thomas Phillipps) and was later in the Schøyen and McCarthy collections; this time it is estimated at £150,000–250,000.

A first edition of Emily Brontë's Wuthering Heights (1847) could sell for £70,000–100,000, while Sir Arthur Conan Doyle's autograph manuscript of The Land of Mist is estimated at £50,000–80,000. Honestly this sale is filled with interesting lots, so be sure to have a look through the catalog.

Forum Auctions sells Books and Works on Paper on Thursday, in 298 lots.

The expected top lot at Swann's Fine Books & Manuscripts sale on Thursday is a first edition of Adam Smith's Wealth of Nations (1776) with a wonderful ownership note: "These two volumes were gifted to W:A: by the author, before publication with a handsome compliment in Mr. Smith's writing which was cut out by a stupid French bookbinder & could not be found, he having destroyed it as sullied paper & substituted this clean leaf in place of it." A later owner attributes the above to Edinburgh banker William Alexander. The set is estimated at $70,000–90,000.

Rounding out Thursday's sales is a 201-lot no-reserve sale of Literature – Food & Agriculture – Photography – Books in All Fields at PBA Galleries.